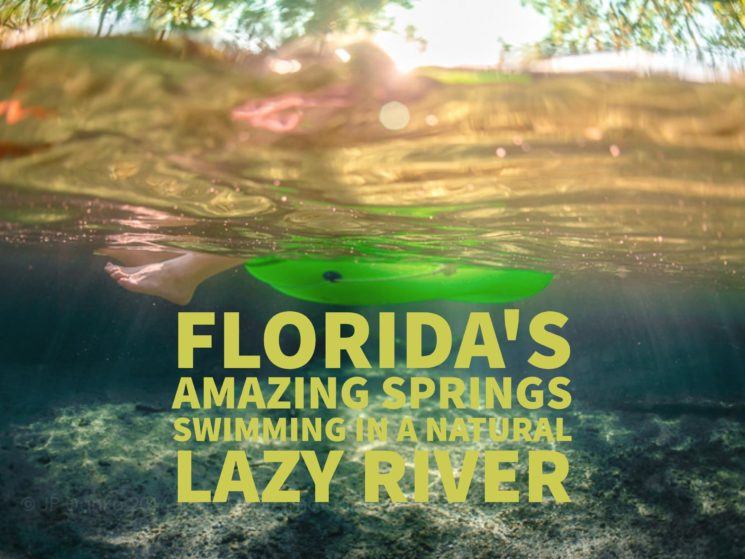 The last time the family and I were in Florida I was less than impressed with the photo opportunities available (see Florida – Worst Place In The World To Take Good Photos).

Several readers suggested that I needed to get away from Florida’s tourist trap attractions and visit some of the state’s more natural areas – so this time we made a trip to Blue Spring State Park – and it was totally amazing!

There are hundreds of natural freshwater springs throughout central and northern Florida. Ironically, many were the state’s original tourist destinations – featuring everything from hotel facilities, glass bottom boat tours and mermaid shows.

However, most are still relatively natural – and several are within a short drive from major tourist destinations like Orlando or Tampa Bay (click here for a map and list of Florida’s springs). 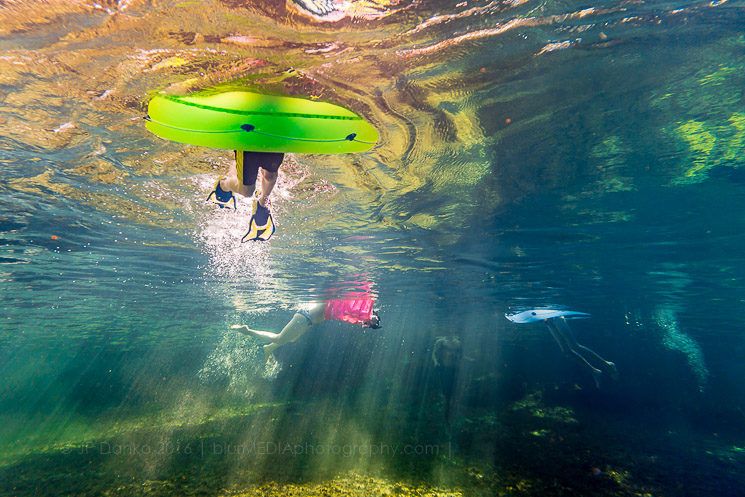 Since we were staying in Orlando, we decided to go to Blue Spring State Park, roughly 45 minutes from the city.

Part of the reason we enjoyed Blue Spring State Park so much might be because the day before we spent the day at Universal Studios Orlando.

It cost over $1000 for our family of four to spend a single day at Universal (park to park tickets, parking, dinner…not to mention currency conversion from USD to CDN).

$1000 for one day at a theme park is just bat$hit crazy (yes I know, if you search you can find “deals” but c’mon – no matter what it’s an insane amount of money to blow on a single day’s entertainment).

It was one of those moments when the ticket teller told us the total price and my wife and I just looked at each other with a look of “are we seriously going to do this?”

Universal was the “big treat” from the trip that we had been building up for the kids (we did Disney Magic Kingdom a couple years ago and should have learned our lesson) – it was too late to bail (I knew it was going to be expensive, just not that expensive) so like the suckers we are, we paid and tried to have a fun time.

The whole time we were at Universal, I kept thinking:

I wonder how many days of work it took to pay for this?

Who are all these people who can afford this? 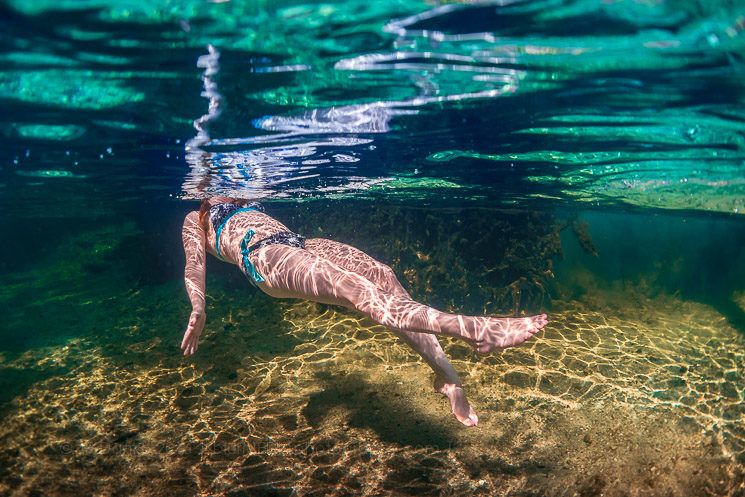 In contrast, it cost $6 to get into Blue Spring State Park – and it was a way way more enjoyable way to spend the day!

We brought a picnic lunch and spent the day in the spring.

The spring itself is like a natural lazy river – you can just float along in a tube or air mattress. 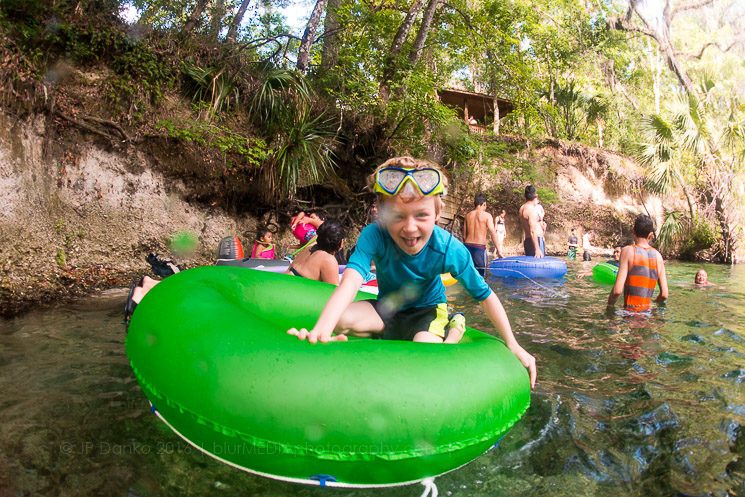 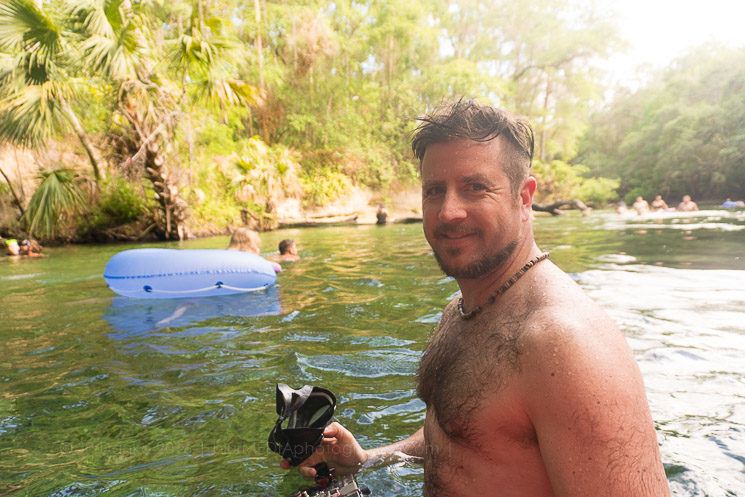 Most of the Blue Spring run is a fairly shallow with a sandy bottom, so you can stand up or swim over to a shallow spot if you need to.

At the springhead there is a pool approximately 20 ft deep over the spring vent which discharges over a million gallons of fresh water every day.

There is a noticeable current in the spring run, but its surprisingly hard to notice at the actual vent…until you start to swim down into it.

The water in the spring is a constant 73 °F (23 °C), so it was a little cool for the kids to be in the water all day. Since the air temperature was pretty warm, when they got cold they would just sit in their tube in the sunshine and warm up. 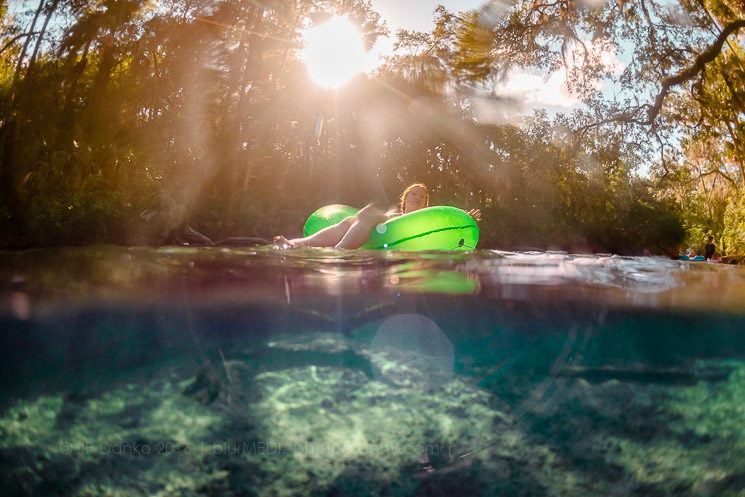 I had two cameras with us for the day at Blue Spring State Park.

While we were in the sunshine, both cameras were set to RAW, auto-white balance, matrix metering, aperture priority and auto-ISO. Later in the day when we were in the shade, I switched over to shutter priority because the shutter speeds were getting a little too slow (you can see the motion blur in some of the photos before I realized the problem and updated my camera settings).

I was using a green water Magic-Filters filter with the Nikon that really helps with underwater white balance and all photos were processed with Lightroom.

The spring was pretty busy while we were there, so it was really just a matter of enjoying ourselves and snapping a few photos here and there. 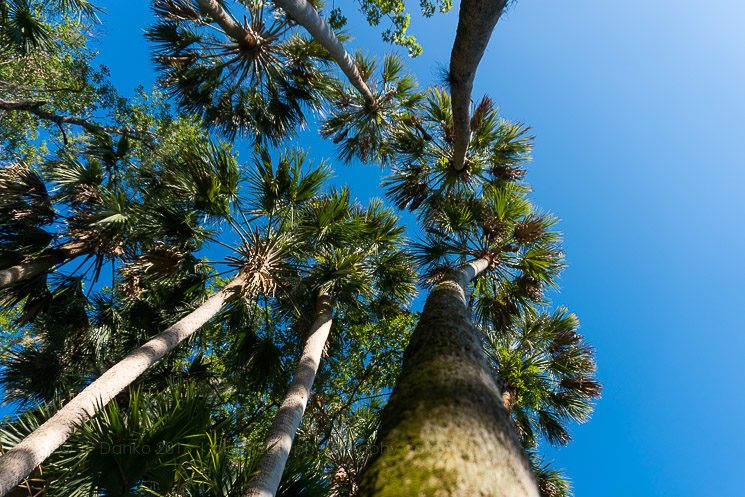 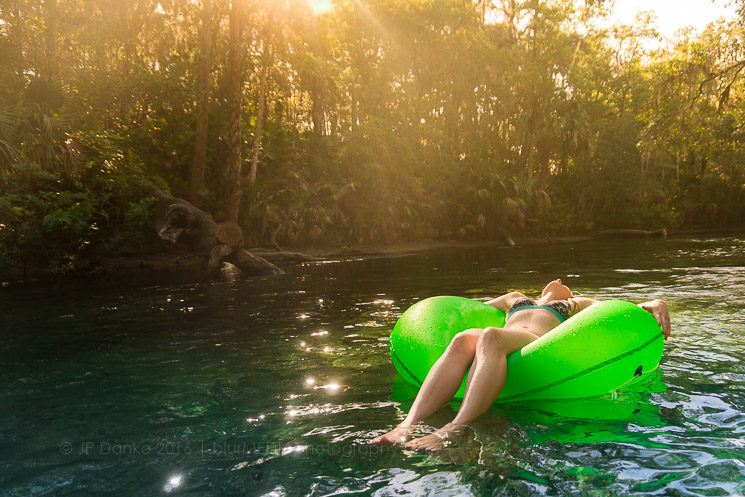 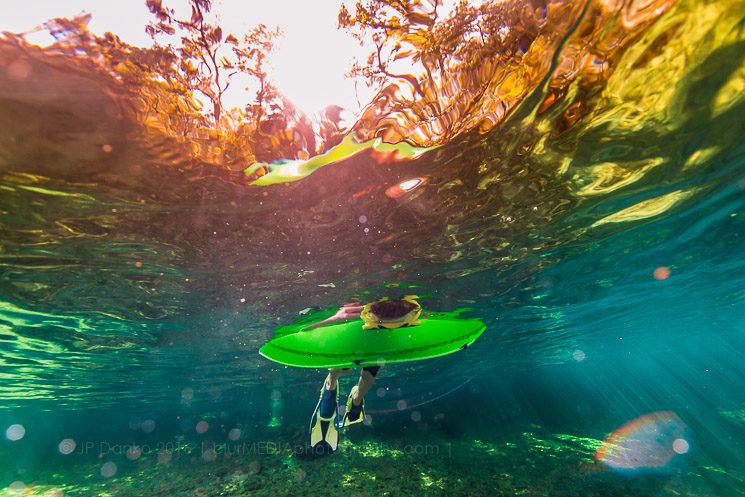 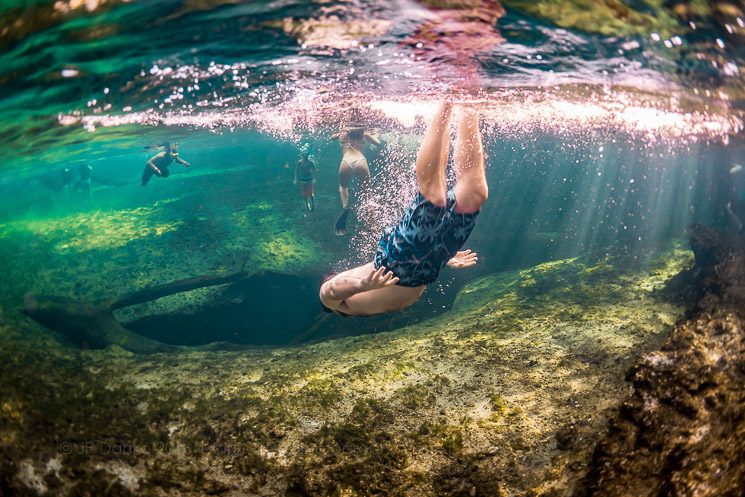 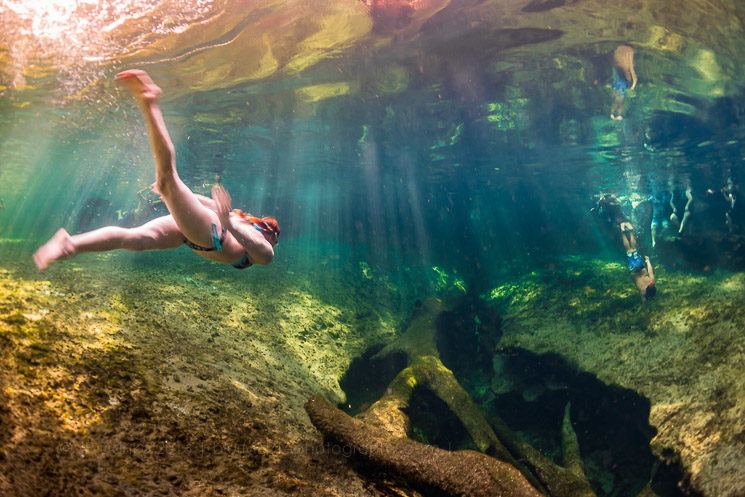 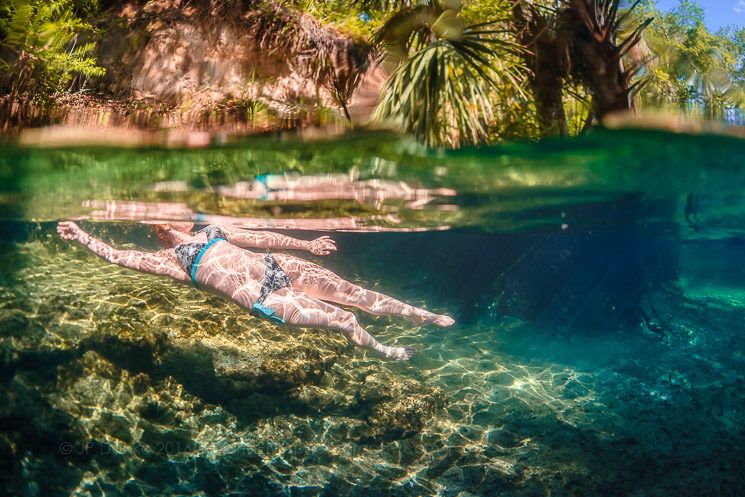 The highlight for me was definitely swimming in the pool at the spring head and seeing how far down into the actual vent I could go.

My wife and the kids were perfectly happy to float around on their inner tubes and snorkel once in a while.

The best part for my son was finding a school of Florida Gar – he just thought that it was so cool to be able to swim around with so many big fish. 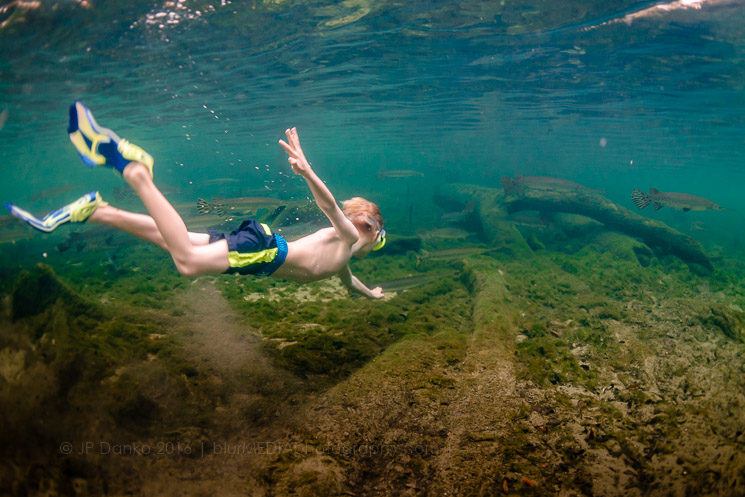 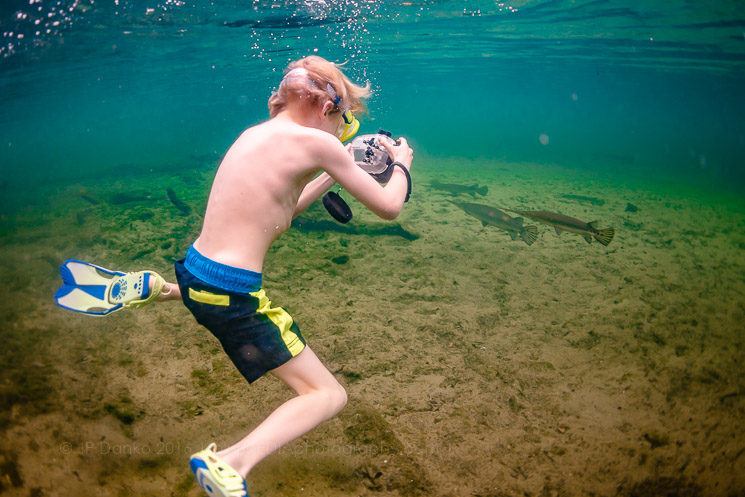 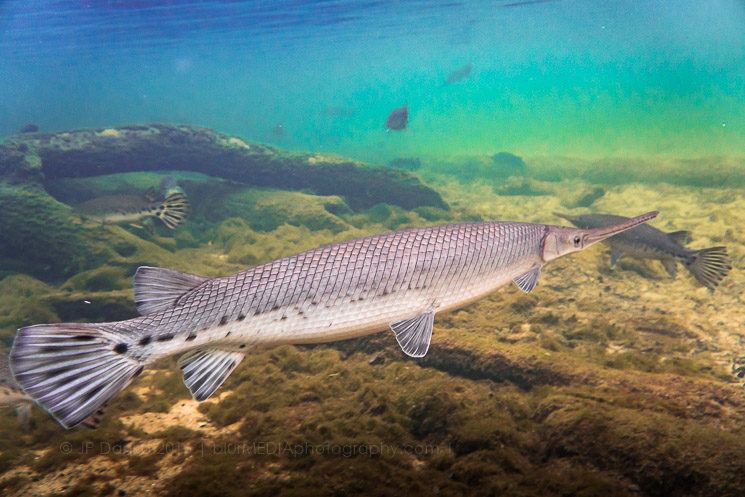 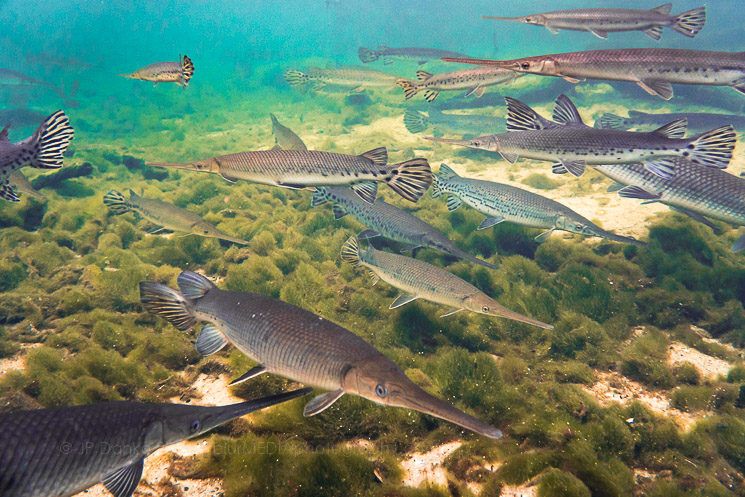 Have You Visited a Florida Spring?

Which Florida spring if your favorite?

Would you rather spend a day at a theme park or a natural lazy river?

What other Florida natural areas are worth visiting?