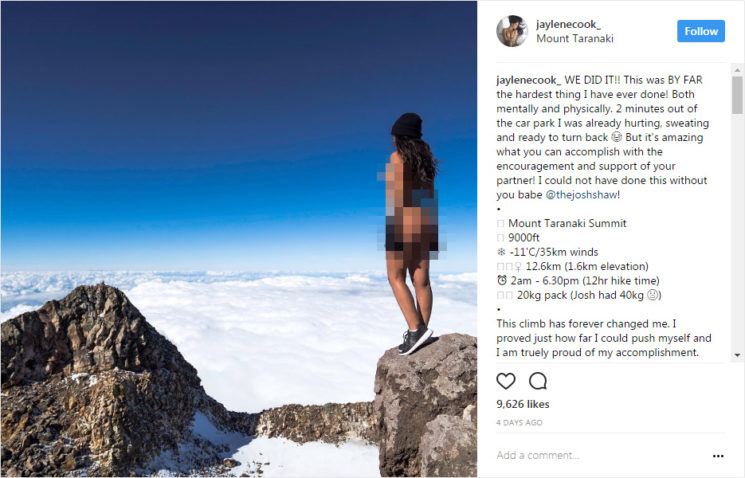 Finding good locations for photo shoots can be challenging, especially if it’s a nude shoot. You need to avoid the touristy spots, the families and dog walkers. You want to find somewhere new, and different. And what’s more different than a mountaintop overlooking the clouds?

For Playboy model Jaylene Cook that mountaintop was the perfect location to grab some quick nudes for her Instagram. The mountain in question is Mount Taranki in New Zealand. The BBC report that the local Maori aren’t too happy about it, either. They say that the photo is “culturally utterly insensitive”. The top of the volcano is sacred to the Maori.

A spokesman for the local Maori tribe told the BBC “It’s like someone went into St Peter’s Basilica in the Vatican and took a nude photo”. He went on to say that “It’s a sacred place and something like this is just very inappropriate.”

Ms Cook, also from New Zealand, climbed the mountain a few days ago with her partner. She posted the photograph to Instagram where it has almost 10,000 likes and over 450 comments. Although, some of those comments are criticisms.

The BBC also spoke with the mayor of the local Stratford district, Neil Volzke, who agreed that it was culturally insensitive.

The attitudes towards Mount Taranaki have changed over the years. Traditionally, even climbing to its peak was considered inappropriate and only rarely done purely for ceremonial purposes. Today they accept that tourists want to climb the volcano. They just want people to be respectful.

Ms Cook attempted to defend herself after the photo began receiving criticism. She says that she did research beforehand and didn’t think that making the photograph would be offensive. I don’t know how much research she did, but 5 seconds on Google brought this article up for me. It’s not really all that difficult to figure out. 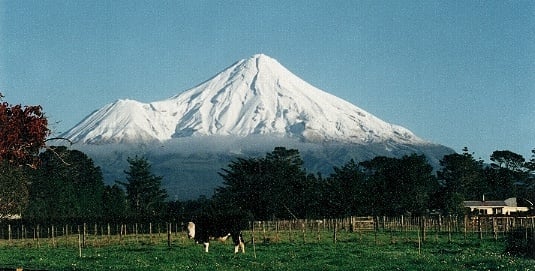 I understand wanting to do something like this somewhere new or different. I really do. I’ve shot nudes on location plenty of times, and I’m always looking for new spots. Something a little different. But you have to respect the local people, their rules and their beliefs. There’s plenty of places I’ve had the chance to shoot at that I declined simply because I knew it would be wrong.

Whether or not Ms Cook or her boyfriend did indeed know that it would be seen as disrespectful and went ahead anyway… Well, I’ll let you decide for yourselves. Personally, though, while there may be nothing graphic or obscene about the image itself, I wouldn’t have shot it.

Looking At 120 Playboy Centerfold Photographs At Once [NSFW]

How To Shoot Nude Photography (NSFW)

« These are the only three reasons to work for free
The amusing unboxing of $138,000 worth of 8K RED Weapon and accessories »