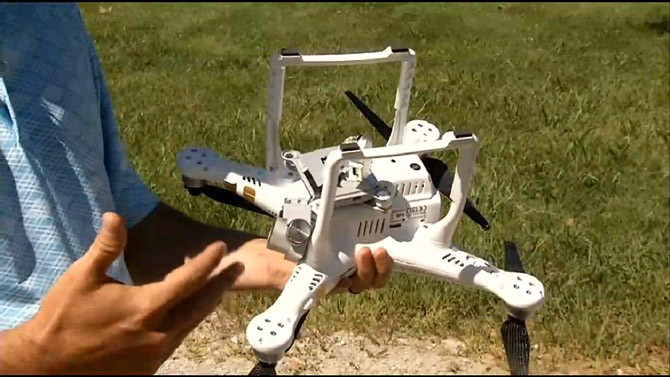 On July 26, 2015, William H. Merideth was enjoying the afternoon with his daughters in the backyard of his Hillview, Kentucky home when they noticed a drone flying around the neighborhood. When the drone finally made it’s way over Merideth’s property, he was armed and ready to shoot the device out of the sky, which he did with a shotgun he procured from his house as the drone was making it’s way over.

He was promptly confronted by the drone owner/operator, David Boggs, who ended up calling the police on Merideth. Merideth was arrested and charged with first degree wanton endangerment and criminal mischief for firing a shotgun into the air. He was released the following day.

“Well, I came out and it was down by the neighbor’s house, about 10 feet off the ground, looking under their canopy that they’ve got in their back yard. I went and got my shotgun and I said, ‘I’m not going to do anything unless it’s directly over my property…Within a minute or so, here it came. It was hovering over top of my property, and I shot it out of the sky,” Meridith told WDRB.

Not unexpectedly, Boggs has an much different version of what went down. “The bottom line is we didn’t do it. We didn’t hover, we didn’t go down, we didn’t do any of that. There’s no way I’m going to fly below the trees the second day I owned it,” said Boggs. He also noted that the memory card, which contained the video footage of the incident was missing when he recovered his mangled device from Meridith. Meridith says he has no idea what happened to card.

Though video from the flight in question would most likely have provided plenty of evidence to see what really took place, it seems like that is out of the question. Boggs did, however, share his drone’s flight path and tracking information in the news clip below, which appears to support his version of what happened.

Despite the drone tracking video Boggs shared with WDRB in the video clip above, Meridith insists the drone was flying at low altitudes, telling a local news station, “He didn’t just fly over. If he had been moving and just kept moving, that would have been one thing — but when he come directly over our heads, and just hovered there, I felt like I had the right.”

In the state of Kentucky, wanton endangerment in the first degree and criminal mischief in the first degree,  are each considered class D felonies. According to WDRB, Merideth does not plan to refute the charges and could be facing a fine up to $10,000 and up to 5 years in state prison for each count.

Personally, I believe Boggs’ account of the story. But, that being said, I understand how Merideth could find a drone hovering over his house–even at 250′ altitude–to be an invasion of privacy or a safety hazard, though, considering he fired a gun into the air in the middle of a neighborhood, I’m not entirely sure if safety was his main priority.

There seems to be an even split of proponents and opponents when it comes to these sort of stories. Judging by some of the internet commentary made in relation to this latest drone vs. shotgun debacle, we’re all still pretty divided. What’s your opinion, should Merideth be facing a two felony charges (assuming he is found guilty) or do you think the punishment is unfair?