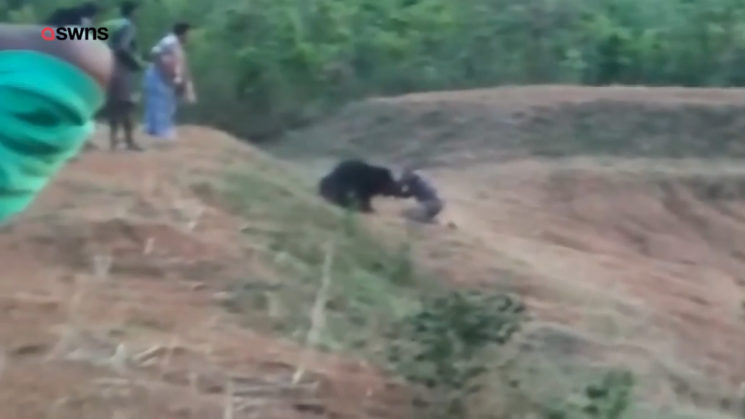 I thought the wave of stupid selfie deaths had ended, although it seems you’re still more likely to die from a selfie than a shark attack. The latest in the long line of no-longer-with-us selfie shooters is Prabhu Bhatara. The Independent report that after stopping to go to the toilet on his way home from a wedding, Bhataru spotted an injured bear in the Nabarangpur district of Odisha in India.

They say that fellow passengers suggested it might not be the best idea for him to take a photo with the animal. But it seems that he knew better and tried anyway. After getting close to the bear, it struck out, which was followed by a struggle between the two. They also report that a stray dog came to the man’s defence and bit the bear, while onlookers, umm… looked on, but it failed to deter the bear.

Forest ranger Dhanurjaya Mohapatra is reported to have said that Mr Bhatara “died on the spot” and that “the bear is being treated for its injuries”.

A word of advice. It’s never a great idea to approach a bear at any time. It’s an even worse idea to approach an injured one that’s in pain. You’re not going to come out of it in better shape than you went in.

While not so common these days, bear selfies were something of a trend in 2014. To the point where the US Forest Service was forced to warn people to not get so close to them. “Visitor centre staff routinely encounter unsafe situations as guests ignore their instructions”, the service said.

Even captive animals aren’t always safe, as one man visiting Yeshanko Wildlife Zoo in China discovered when he was drowned by a walrus.

At least, this time, human stupidity and vanity didn’t cause the animal to die.

Be safe out there, folks. And be smart.