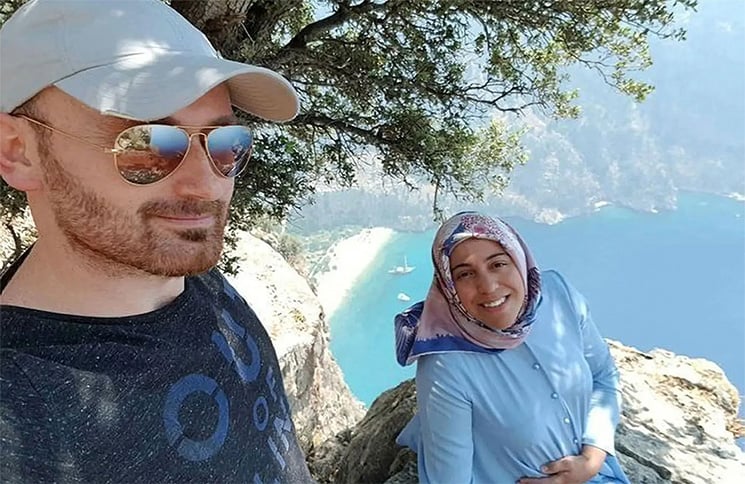 A Turkish man recently committed a terrible crime while pretending he wanted to take some selfies. He made his pregnant wife think they were about to take some snaps on a 1,000 feet (304m) tall cliff. When he lured her to the cliff’s edge, he pushed her down straight to her death.

Hakan Aysal (41) was convicted of the murder of his seven months pregnant wife Semra Aysal (32). According to the New York Post, the couple was visiting Turkey’s popular spot Butterfly Valley in Mugla in June 2018. Hakan reportedly lured Semra to the edge of the cliff even though she was afraid of heights. As she approached him, he pushed her down, and she had no chance of surviving a fall from such height.

There were witnesses to the couple’s final moments together, some of whom even filmed them.  “My daughter was filming the view with my phone and the Aysal couple came down the slope at that moment,” one witness told the New York Post. They added that there was no interaction between them as they were coming down the slope. “We even joked, ‘Either this man will throw the woman off or the woman will throw the man,’” they said. Sadly, the tasteless joke turned out to be the bitter truth. Another witness said Hakan appeared unusually calm after the incident.

The New York post that Hakan originally denied the killing. However, shortly after his wife’s death, he reportedly took out life insurance on her behalf worth $25,000, which was suspicious. He was recently found guilty of his wife’s murder, but he reportedly tried to challenge the verdict claiming he’d been mentally disturbed. Thankfully, his claims were dismissed, and he’s likely to spend his life behind bars. The court said that he must serve at least 30 years in prison before he can be considered for release.

Sadly, we’ve witnessed many accidental selfie deaths as reporters, but also crimes like murders of and armed robberies of photographers. All of these stories shake me up, but this one made me particularly sad, reminding me of all the women going through all sorts of violence at home. So I want to use this opportunity to draw your attention to the rising rates of femicide.

“Of the 81,000 women and girls intentionally killed last year, 45,000 – around 56 per cent – died at the hands of intimate partners or other family members,” the UN writes in a recent article. Before you tell me, “why don’t you talk about women killing their male partners?!” I’ll leave you with some more statistics, stating that “11 per cent of all male homicides are perpetrated in the private sphere.”

Take a look at the International Domestic Violence Resource Guide, it also contains a list of hotlines for different countries worldwide.

Brazil man plunges 40ft to his death while taking a selfie