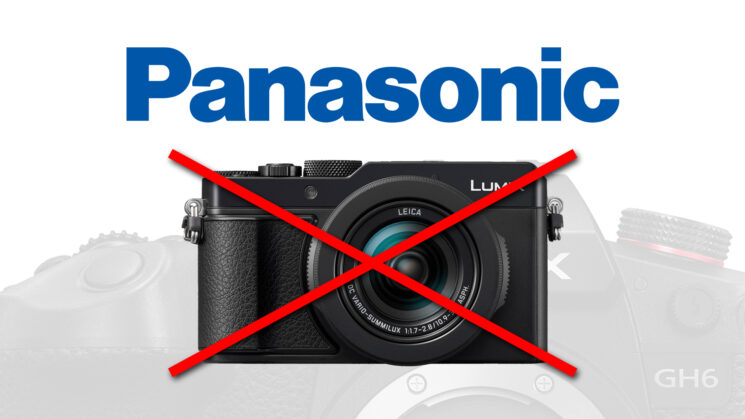 It’s probably not much of a surprise, really, but as Newswitch reports, Panasonic Entertainment and Communication president, Akira Toyoshima, has stated in a press conference that Panasonic is essentially done dealing with lower-end and compact cameras. They’re not giving up on cameras completely, however, saying that they are going to be focusing on, amongst other things, “video mirrorless cameras”.

This essentially confirms the August rumour that Panasonic was planning to dump low-end gear – an idea that seemed to be backed up last month by the discontinuation of the Lumix LX100 Mark II. Getting rid of the compact point and shoots and cameras primarily designed for shooting photography rather than video. The move definitely makes a lot of sense in a world of smartphones – and all the other camera manufacturers have done it.

The company will shift revenue sources from the existing TV and camera businesses, which are not expected to grow significantly in the future due to the rapid progress of Chinese and Korean companies and the spread of smartphones.

The way it’s worded can seem a little ambiguous, and I think a little something might get lost in translation. While resources are being taken away from the camera business, Panasonic is shifting its attention towards “video mirrorless cameras”. I don’t think this means that we’re only going to see updates now for video-centric products like the Panasonic GH6, Lumix S1H or Lumix BS1H, though, at the expense of more stills-oriented bodies like the G9, or S1R – or whatever their future replacements end up being.

I think the term is just used to illustrate hybrid mirrorless cameras that are capable of both stills and video. Whether or not we will see stills-oriented bodies for specific applications, like super fast action, fast response cameras for sports and wildlife, or ultra-high-resolution cameras for landscapes and fine art, though… Well, I guess we’ll just wait and see. I hope so.

Of course, it might literally be that they’re focusing all of their efforts on video and that the stills features are just an afterthought. I really hope this isn’t true, especially for the L mount system and especially when Sigma still hasn’t released their full-frame Foveon camera yet. It would suck to have bought into L mount over the last few years or even Micro Four Thirds, as a stills shooter, to find out that there weren’t going to be any new cameras designed and targeted specifically to your needs.

That being said, Panasonic does have that reputation for video amongst their mirrorless cameras, so maybe it’s not such a bad idea after all. I shoot Panasonic MFT for video. I’ve bought half a dozen Panasonic MFT cameras specifically for shooting video since 2020, and I have zero regrets, but I still use my Nikon DSLRs for stills. So, if you’re willing to shoot multiple systems for stills and video, or you’re only interested in video, then it won’t be so bad if they do go that way.

« Man takes a selfie with his wife on a cliff, pushes her 1,000 feet to her death
AstrHori releases pictures and specs of upcoming 105mm f/2.8 tilt-shift macro lens »