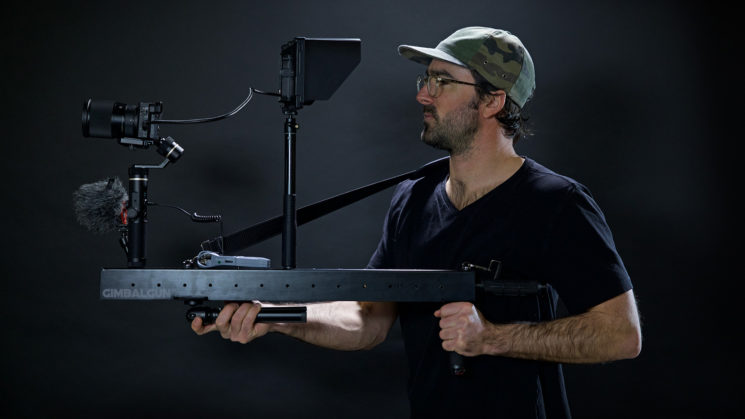 I really have no idea how I feel about this thing. This is the GimbalGun. It looks like something you’d use to take tanks out, but it’s actually a support system designed for use with single-handed gimbals to give you even more stability. It’s not available just yet, but it’s coming to Kickstarter soon.

Essentially it’s a long metal box with a bunch of 1/4-20″ holes for connecting devices. A gimbal, monitor, microphone, lights, mini tripods, or whatever you need to carry around with your gimbal. But its goal is to help take the weight off your arms and onto your more substantial shoulders.

It supports just about any gimbal that has a 1/4-20″ socket in the bottom. If you’re using something like a Zhiyun Crane 2 which has a 3/8-16″ socket, you’ll need a thread adapter. And while I have no doubt that the added weight and distribution of it will likely help to produce a steady shot, especially when it comes to panning and tracking, I’m not entirely sure how comfortable that thing would be to wear for an entire day.

They’ve posted some sample footage shot using the GimbalGun, and while it doesn’t really look much different to simply holding the gimbal in the usual way, I would imagine the gimbal operator’s arms were thankful for the weight distribution.

And that’s the whole advantage of this product, really, to shift that weight off your arms. I know whenever I’m walking around with the Zhiyun Crane 2 or Crane 3 LAB with a DSLR, an f/2.8 zoom, a microphone and other gadgets, it does start to feel rather heavy very quickly. And I put it down somewhere the instant I can after a take is done until we’re ready to go again.

If you want to see the GimbalGun in operation, they’ve also posted a behind the scenes of that, too, following Austrian snowboarder, Dylan Norder around the streets of Innsbruck.

The one thing I feel this doesn’t resolve, which it potentially could, is the Z axis bounce you often see from walking with a gimbal. When you walk, your hands, arms and shoulders all bounce up and down, and it is noticeable in the sample footage shown above. There are solutions out there to help account for this, both commercial and DIY options. So, I feel not incorporating some mechanism like this into the GimbalGun is a missed opportunity.

Logically, the idea of redistributing all the weight you have to carry makes sense. This is why vests with stabilised arms are still so popular, even with a motirosed gimbal. I’m just not so sure how ergonomic and comfortable this particular design will be. After all, it’s just a straight square metal tube at its most fundamental.

I probably wouldn’t use it near any warzones.

The GimbalGun isn’t quite available to buy just yet. It’s coming to Kickstarter soon to fund the manufacture of the first run. The expected retail for the GimbalGun will be $199, but there are expected to be some early bird deals on the campaign coming in substantially below this figure.

For now, if you want more information, you can head on over to the GimbalGun website.