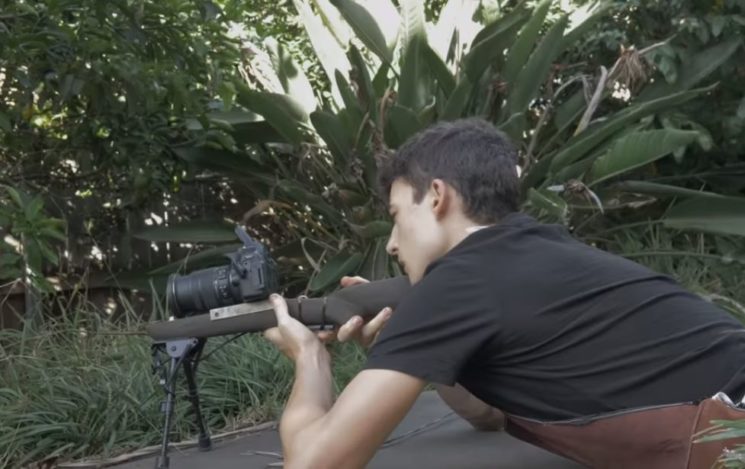 If you want to bring out your inner hunter but you wouldn’t hurt a fly, Alex of I did a thing has a fun DIY project for you. He has made a rifle that lets you shoot animals in the only humane way: with your camera. This camera rifle is cheap and easy to make, and Alex shares the build process in the video below.

Alex says that he was inspired for his DIY project when he saw this man and his camera rifle. There’s also Zenit’s Photosniper, originally made for military use, and pricey Leica’s prototype with the same concept. But whenever you can make it yourself, I say go for it.

How to make the DIY camera rifle:

The building process is pretty simple. The main part is to draw the desired rifle shape on the wood and cut it out. After that comes the boring part: filing and sanding. When you’re happy with the smoothness of the wood, it’s time to stain it to give it the final look. You can choose any stain color you like, or DIY it with coffee, vinegar, and steel wool.

Now that your rifle attachment is made, the rest is easy: attach your camera to it using the corner plates and the tripod mount. Plug the remote trigger in the camera and attach it to the rifle using zip ties. If you want to add the extra kick to your “weapon,” you can also add the rifle bipod. But I show up in public with that if I were you. You might actually get shot.

Anyway, this is pretty much it when it comes to making this DIY camera rifle. You can now go to your backyard or a forest and shoot animals as much as you like. None of them will be hurt, and you’ll come home with some neat photos. What’s more, you can shoot people this way, too!

[A Humane Way To Shoot Animals | I did a thing]

The First Portable Movie Camera Was This 12 FPS Rifle

« The “GimbalGun” wants to give your arms a rest by shifting the weight of your rig to your shoulders
Olympus could be leaving the digital camera market, reports say »