Today’s HD-SLRs are capable of taking 60fps images at mind blowing resolution. But looking for their ancestors reveals that the first portable “motion picture” camera was actually based on a rifles packed not with bullets, but with a plate of film.

The design of the first Chronograph (this is how they called it) was made by French scientist Étienne-Jules Marey and debuted at 1882 by the name of Fusil Photographique or photographic ‘rifle’.

The rifle used a magazine consisting a plate film separated into 25 light tight compartments – each was exposed separately at a staggering rate for that time of 12 FPS. 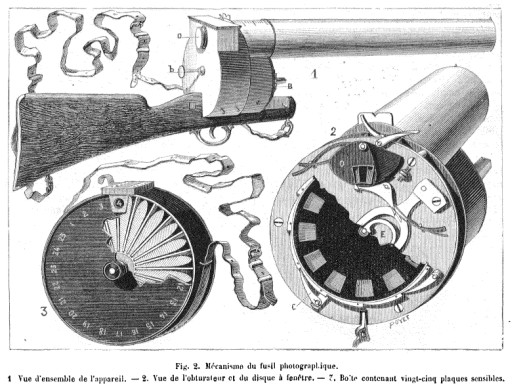 Étienne-Jules Marey used the  Fusil Photographique mainly to study the movement of birds and the rifle based form factor allowed him to track the birds movement in the air. This is how using the rifle looked like:

“The film (above) of the Fusil Photographique
in use was not taken in 1882, but at a later date. By
firing the trigger, all three disks moved with the help
of a clocked mechanism (see below).

These photographs of birds were to this point in his
experiments, the most exciting to date.

The rifle’s portability allowed a new form of perspective
to be captured while keeping the subject within the frame.

This was soon to be known as ‘panning’, which quickly
caught on and in the early twentieth century became a
staple of filmmaking.”

Each reel resulted in an animated gif similar to this one series of pictures that could be re-played as a movie: 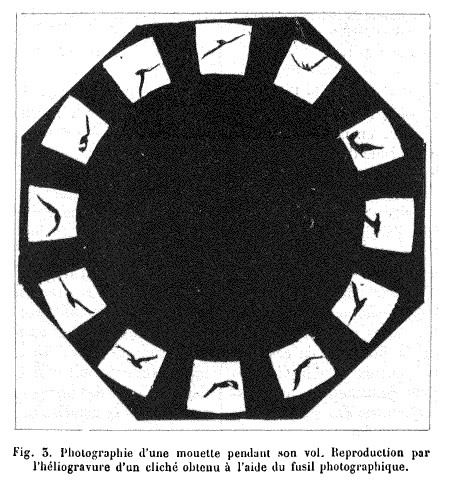 P.S. Like guns and cameras? How about this Revolver Camera?

P.P.S. We did not invent anything new, Just like GoPro were preceded with this Dr. Julius Neubronners Pigeon Camera mount

This DIY camera-rifle offers a humane way to shoot animals