Hypersync is a mechanism that allows shooting at a high shutter speed while still using a strobe. 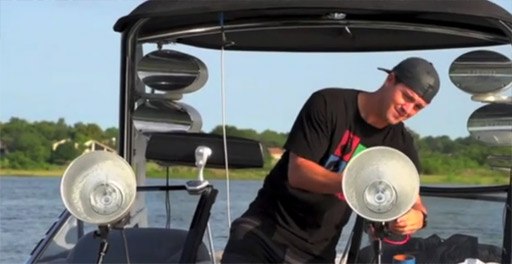 Photographer Chris Garrison, who shoots for Red Bull has a great interview where he explains the concept along with several setups for water based action photography.

Most digital cameras have a sync speed of about 1/250, but Hypersync allows syncing a strobe at speeds up to 1/8000 with certain configuration. If you are shooting outside and are trying to overcome the sun, you want a high shutter speed (less ambient light coming in) but still want to use a strobe to fill in shadows. Some camera/strobe combos support something called Hypersync which makes sure that the most powerful part of the pop is covering the entire duration where the shutter is open.

While I’ve seen a lot of hot shoe based setups for High Sync speed, Chris goes over doing a similar thing with Elinchrome studio strobes (Elinchrom Ranger RX Speed AS with S FlashHead) and Pocketwizard ST4/TT5 combo. What was interesting for me to learn is that Chris opted for a slower strobe head which had a longer strobing action.

How to make sure you don’t lose your presets, brushes and actions when you upgrade Photoshop

« A Hand Made Motorized Panoramic Head (Made With An Old CD, And Handmade Gears)
This Cardboard Nikon Can’t Ever Get Wet »