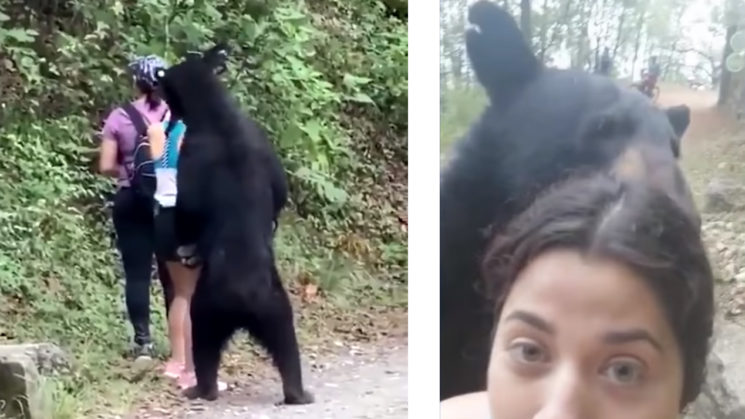 What would you if a bear approached you and started sniffing you? I’d probably scream and run for my life, but this lady saw a photo opportunity in it. A video recently emerged showing the woman as a bear approached her – and she took her phone out and snapped a selfie.

In the video, you can see the curious black bear as it approached a group of hikers. He started sniffing one of the women, pawing her, and it looks like it even bit her leg at one point (but very gently). It seems to me that it’s a baby bear, but it’s still pretty tall when it stands up.

The whole group managed to remain calm. In fact, the woman even took her phone out and snapped a selfie. The bear eventually gave up, and the group went on walking. It doesn’t look like they provoked the bear or approached it first, at least from what we can see in the video. Unlike this woman from Romania, who got out of the car to take a photo with a bear.

For everyone who wanted to see the selfie she took as a bear stood over her…here it is. pic.twitter.com/O6Fa9WrTkE

The incident is believed to have taken place in Chipinque Ecological Park. Since the video started going around the internet, the park issued a statement regarding the incident:

“First of all we want to communicate that we are relieved that people were unharmed. We thank the visitors who gave their support to the three people and we recognise the calm they maintained during the tense moment they lived through.

This type of approach by the black bear to the visitor is an abnormal behaviour caused by humans. The interaction shown in the video should have been avoided. What is indicated is to move away when detecting the presence of the bear and not get closer; however we see that even the person seeks to take a photo.

Given the above, Chipinque will take strict measures against visitors who put their life and / or wildlife at risk. Remember that Chipinque is a protected natural area, home to wild flora and fauna, so the sighting of mammals is not unusual, and it is the responsibility of the visitor to stay alert during his visit, avoid getting close and report the presence of a bear to our park rangers.”

The Humane Society of the United States also issued a statement regarding the encounter:

“Allowing yourself to be close to a bear or stopping to take a selfie with a wild animal is taking your life in your own hands, and goes against everything you should do to protect yourself and the animal.”

If you ever get approached by a bear, there are steps you can take to avoid an attack and chase away the animal. Although, taking a selfie isn’t one of them.

Woman shoots herself while posing with a shotgun for a selfie

« Colour in Cinema: Ad Astra – The Most Colourful Movie You Never Saw
Sony’s A7S III reported to be the first mirrorless camera to use CFexpress Type A memory cards »