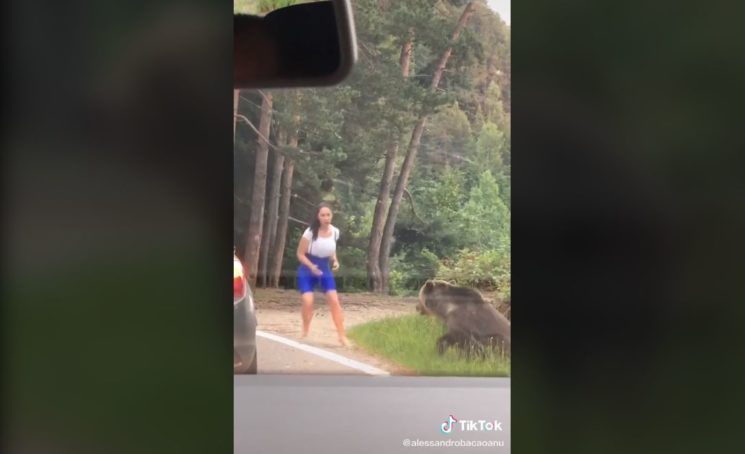 It’s fairly often that we hear of tragic encounters between wild animals and humans “who just wanted to take a photo.” Still, it doesn’t seem to be enough of a warning for people who want to pose with wild animals for social media.

TikTok user Alessandro Băcăoanu recently published a video of a woman who tried to pose next to a bear while a man photographed her from a car’s roof. The bear lunged at her, and she was lucky to escape fast enough.

According to LADbible, the video was filmed in Romania. The guys who filmed it speak in Romanian, saying something about how stupid the woman is trying to pose next to a bear. Well, I can agree with that, in every language I speak or understand.

The same source writes that Romanian authorities have already issued warnings for drivers who see bears by the road. “The bear is a wild animal protected by law, not a pet,” said Costel Alexe, the Minister of the Environment. “I say once again to the citizens of this country: a bear which has tasted biscuits, wafers, and feels that he can get his food in this way, will never be able to adapt to the forest again.”

Judging from the video, the bear gave the woman a warning and a proper scare. If she didn’t run into a car, this encounter probably wouldn’t have had a happy ending as it did. And to be honest, I wouldn’t blame the animal. Stay away from wild animals, especially big and dangerous ones. Get a longer lens if you want to photograph them, and endanger neither them nor yourself.