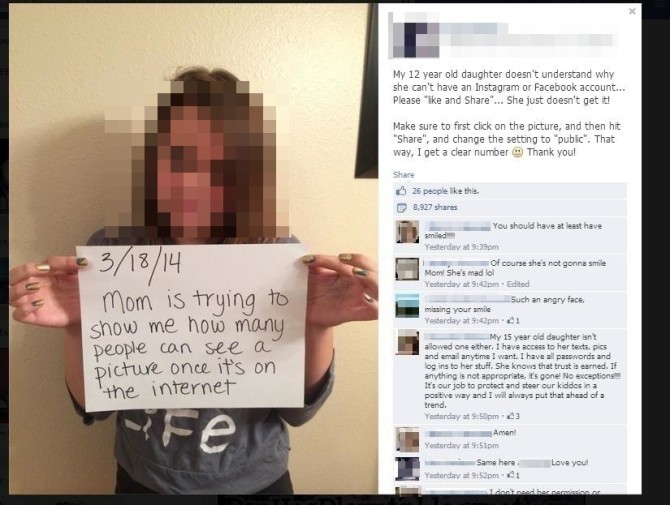 It starts off with the mother posting a photo of her daughter holding a sign that says to ‘like and share this’ on Facebook because the young girl needs to learn some lessons on how many people can see her photo on the internet. Then 4Chan’s /b/ thread found it. If you’re familiar with them, just skip the rest of this article. You know exactly everything that happened next.

You’ll probably feel a bit sorry for the mother in this story. Poor woman was just trying to help her daughter realize just how dangerous it can be when you put your picture on the internet. But the demonstration she tried pulling to teach that lesson ultimately became a real-life danger in itself. After a few thousand shares, the post got brought to the attention of an image-posting thread: “/b/” on a website called 4Chan (If you plan to visit, keep in mind that it’s incredibly NSFW). What resulted from that was the creation of an entire thread of photoshopped versions of the picture. Here’s the most appropriate one I can post here: 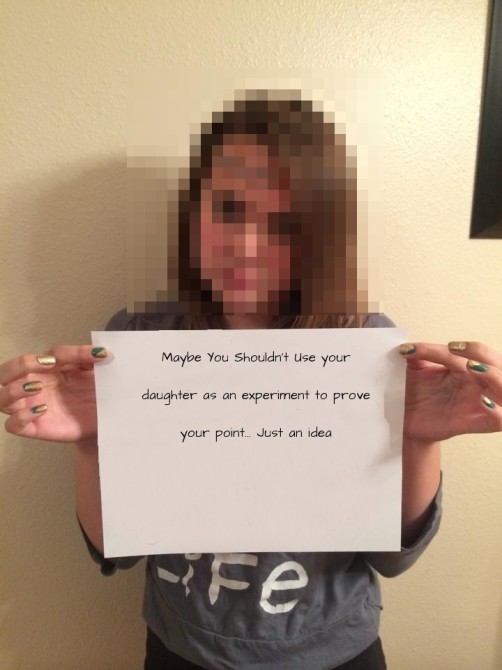 It didn’t stop at photos. The board ended up finding out the mother and daughter’s address and phone number, and proceeded to start ordering pizzas to their house. It’s pretty frightening when you think about what else could have happened, but again, you’ll probably only feel a bit sorry for her. With the ridiculously annoying spam posts like hers that appear on Facebook more and more now, most people on the internet just don’t react kindly to it at all. All along, she was asking for the picture to be shared publicly as well. At the end, 4Chan really did nothing but help her in teaching the lesson she wanted to teach in the first place.

Here’s another lesson to be learned. Think of 4Chan’s “/b/” forum as Godzilla. When Godzilla was originally released in 1954, it was meant to be a symbolization of mother nature and its unpredictability. Most importantly, Godzilla was a reminder that man will never be able to control mother nature. Here, the internet is mother nature, and /b/ is the result of our interaction with it. /b/ can be downright chaotic; and then it can be what fights for justice at the same time. It has no agenda. It’s a lesson on how unpredictable the internet can be, and how careful we need to be when dealing with it; especially when it comes to pictures.

What do you guys have to say on the matter? I feel bad the the family had to deal with that scary of a situation, but I also feel the mother brought it upon them herself by handling teaching a lesson in an inevitably bad way.

P.S. This is not really surprising considering the results of this  5Th Grade Social Experiment dealing with facebook photos going viral.

Trust Issues: The 4Chan Photo Leak, and What We Need to Learn From It

« Panasonic Is Officially Stepping into the Wearable Market with their 4K Camcorder
Teenager Hated His Selfies, So He Tried Ending His Life »