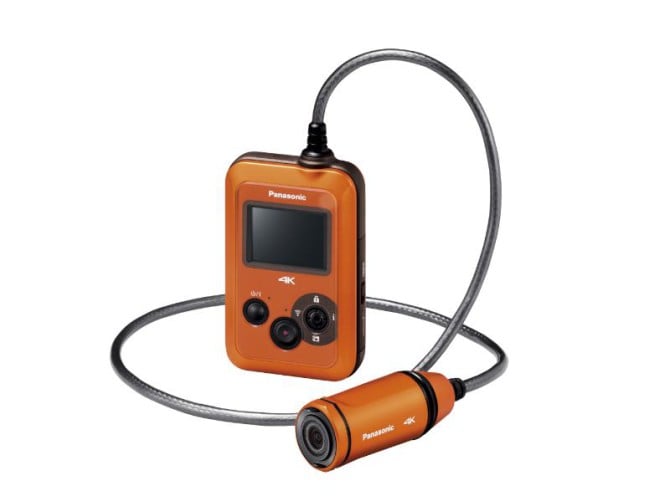 2014 is going to be a game-changing year for wearable technology. Google Glass is slowly making its way into the consumer market, having just finalized deals with companies like Ray-Ban, and then there’s independent companies like GoPro that have already popularized the action camera within the timespan of less than a year. Now, Panasonic is stepping into the ring with its announcement of the HX-A500 4K action camera.

Let’s get right down to what it’s got to offer. The A500 is going to film at 4K/30p quality, which makes it the first wearable camera of its kind to do so. Considering that might make the sensor pretty big, Panasonic decided to deviate from the usual wearable cameras we see and separated the units that make the device; there’s the camera itself that you’ll place on your head, and then there’s the LCD screen unit (weighing in at 1 ounce) that you mount with an armband. The entire device itself is, of course, waterproof and dustproof by IPX8/IP5X standards.

On to the picture quality, the HX-A500 is going to be able to shoot up to a maximum of a 160 degree wide angle, so the vision should be stellar if the numbers hold up in real life. Low light is always something that needs to be tested then, as well, but Panasonic did state that the camera will include a 1/2.3-inch BSI Sensor, which supposedly shoots images with higher sensitivity. The image processing is provided by Crystal Engine Pro+, and along with that the camera will include the usual stabilization, tilt correction, and slow motion (60 fps at 1080p, 120 fps at 720p, and 240 fps at 480p).

Panasonic’s wearable camera will enter the U.S. market at a price of $399 in July, which puts it up against the <a href=””>HERO3+ Black Edition by GoPro. Both have WiFi capabilities, with NFC included in Panasonic’s model. While its great to see competition beginning in the field, I think Panasonic should have offered just a bit more with its addition. At the same price as the Black Edition Hero, it’s biggest advantage is the 30 fps 4k over GoPro’s 15 fps. Considering it’ll take till July for Panasonic’s item to get here, it might already be falling behind in technology by then when a product one-ups that spec. And there’s another important matter here that Panasonic will have to get past, and that is answering why people will switch to it when GoPro is so trustable already. It’s not like Canon and Nikon, where each product has something different to offer with it.

Leave your thoughts below. And until June, you can pre-order Panasonic’s newest camera here!

« Things You Can Do With A Piece Of Illustration Board
Mom Tries Teaching Daughter a Lesson, and 4Chan Gives a Demonstration »