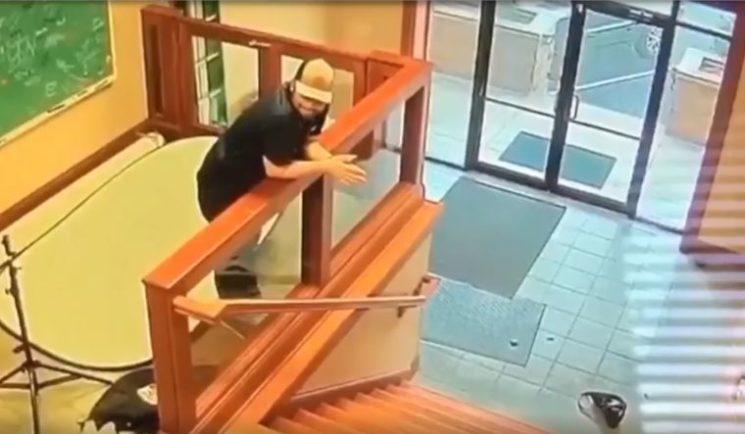 Some photographic accidents are lucky and end up in fantastic images. Sadly, way more of them just end up in broken gear. This photographer knocked over his camera simply by opening a collapsible reflector, and it’s caught in a video that’s pretty painful to watch.

The video was shared by Photography Memes and we don’t know who the unlucky photographer is. But you can see the moment when he opens the reflector which knocks his camera over. The poor camera bumped down the stairs a couple of times. The lens hood got detached, but it seems that there were some other bits and pieces of the lens flying around the place. I’m pretty sure that the lens couldn’t survive a fall like this.

Now, I think that this wasn’t pure bad luck, but there was some recklessness involved, too. Sure, it took some really bad luck to bump your camera with the reflector, and send it down the stairs. However, it wouldn’t have happened if the guy didn’t leave the camera where he did. Or perhaps this could have been avoided if he opened the reflector like a pro. Either way, I hope that he at least learned a lesson. Although, it was an expensive one.

What’s the worst thing that you did to your gear? Any funny/painful stories to share?

« Photographers get exploited because they love their job, study finds
Patent shows Canon’s EOS R stabilisation will be an in-body and in-lens hybrid system »