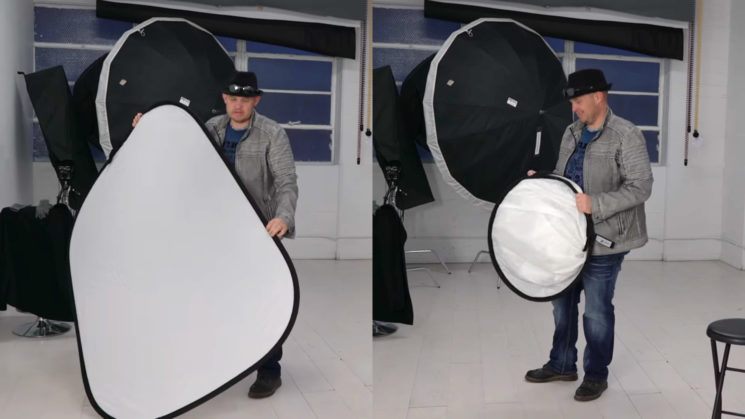 Folding reflectors, softboxes and backgrounds are awesome. There’s no two ways about it. They pack down really small for transport or storage, they pop up quickly when you need them, and they’re really lightweight. As a location shooter, they’re perfect for me. Even my white balance card folds away like a reflector. Whatever helps pack the gear down into the smallest and lightest space possible is welcome.

But once they start getting to a certain size, they can become quite troublesome. Gravity kicks in, which then either becomes your best friend or your worst enemy. But there is a simple way to fold up these giant reflectors and backgrounds. In this video, photographer Jason Lanier shows us exactly how it’s done.

As you can see in the video, large reflectors and backgrounds are fairly easy to fold up once you know how. But if you’ve never done it before, then it can take a good while to figure it out, even if you’ve folded smaller ones just fine.

In fact, it can actually be extremely amusing to watch somebody attempt to fold one up who’s never tried it before. I know many photographers who pass one off to their new assistants to fold after a shoot. The assistant never realises they’re being set up for failure. It’s a bit of a cliché, but it still never gets old for those who get to watch it.

But, the process is very simple. All you do, is fold the two long sides toward each other, and then let the other end come towards you underneath. Finally, twist the top inwards, and it just falls right on top of itself. It might take a couple of goes for you to get it perfect, though.

So, if you’re ever asked to assist on a shoot, learn the technique now. Then you can avoid potential embarrassment later. And if you’re a photographer who’s had one of these laying open against a studio wall for several months because you can’t figure out how to get it back in the bag, now you know.

If you’re still interested in a little embarrassment, you can always try the reflector challenge.