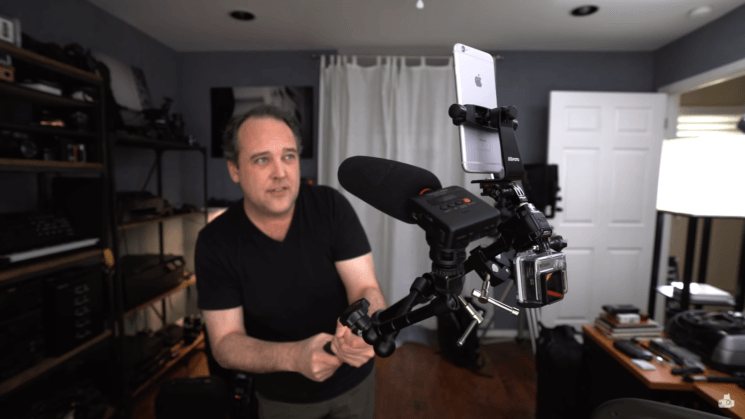 Selfie sticks are so 2014. And because of this, Ted Forbes has created the ultimate selfie stick for all the super-narcissistic souls out there. He named it Stork Mach 1, and it’s made for taking photos, video and live-streaming. In light or dark, in any climate, you can point that camera towards you and click. Now that’s a selfie stick!

Of course, this whole concept is a result of a joke. He created this ultimate selfie-stick as a “sister” to his smaller rig Sparrow M1. However, you can still get something useful out of this video and learn how to build a rig for mobile photography and videography.

Stork Mach 1 as an iPhone mount, a GoPro, a microphone, and even an LED light for your face to always be optimally lit. And using this latest wonder of technology, you won’t miss a thing!

Ted uses the GoScope telescopic pole because it’s firm, more stable and less shaky than a generic selfie stick. He adds mounts for iPhone and GoPro on the top. He presents the generic mounts in the video, which are cheap, available and made of plastic. However, he recommends using a more durable and expensive version like MeFoto SideKick360, which he mounted it with a K-Edge.

In addition to an iPhone and GoPro, there are also a microphone and a LED light. To bring these two together with the rest of the construction, Ted uses two fiction arms. He adds them to the telescopic pole to complete the ultimate selfie stick. Only he warns not to add too much payload onto them, because they can only take light items.

Joke or not, this probably is the world’s most insane selfie stick. I wonder what will come next.

[INSANE SELFIE STICK :: THE ULTIMATE FOR MOBILE PHOTOGRAPHY | The Art of Photography]

Don’t like selfie stick? Check out a new gadget from its inventor

« This stunning video captures all four seasons through microscopes and macro lenses
This photographer takes photos of flowers and plants using UV-induced visible fluorescence, and the results are beautiful »