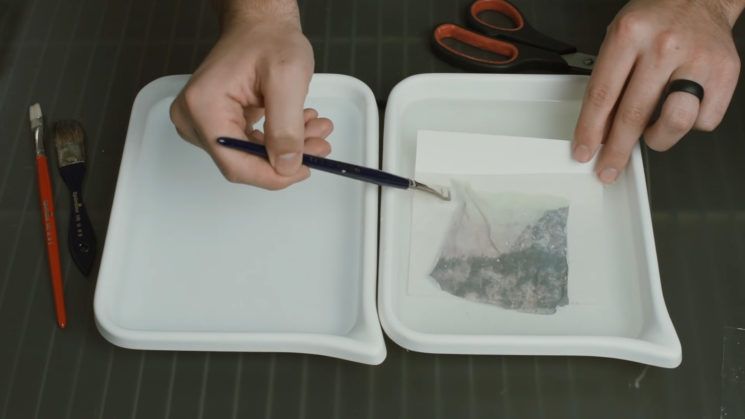 Thanks to companies like the Impossible Project, Polaroids have seen a massive resurgence in popularity. While Fuji and others have come out with other forms of “instant film” in recent years, Polaroid still seem to see the most demand. One advantage of using Polaroids, is that you can actually lift the emulsion from the backing and remount it onto pretty much any surface you like.

It’s not a quick process, but it is fairly straightforward. You just need to be careful. It opens up all kinds of creative possibilities for those who want to do something a little different with their Polaroids. Photographer Matt Day describes it as one of his favourite things to do with instant film. So, he put up a video going through the whole process from start to finish.

The 24 minute long video shows you just how quick this process isn’t. And while it can seem like an awful lot of work, it does let you give your photos a unique one-off twist.

The starting point is two trays of water – one warm, one cold – and a stack of Polaroids from which to choose your image. 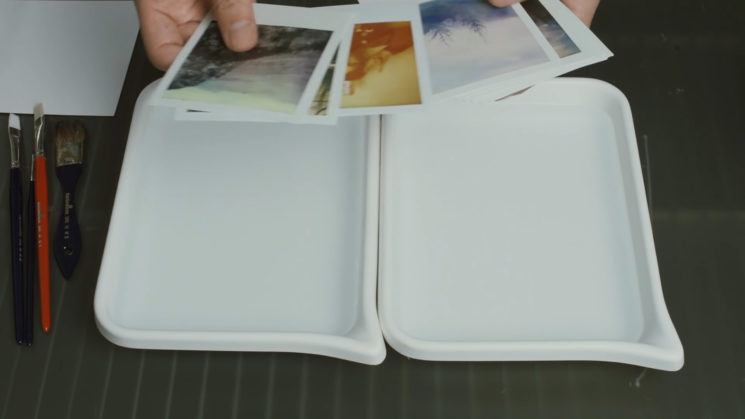 You’ll also need a pair of good sharp scissors, various brushes, and something on which to transfer the image. Matt used small pieces of watercolour painting paper. This paper means that he can submerge it into the trays without it falling apart in his hands. He used fairly small squares, which give a nice sized border around the final image.

To prepare the Polaroid, Matt first cuts the white border off from the original. This provides access to the various layers of material that make up the print. 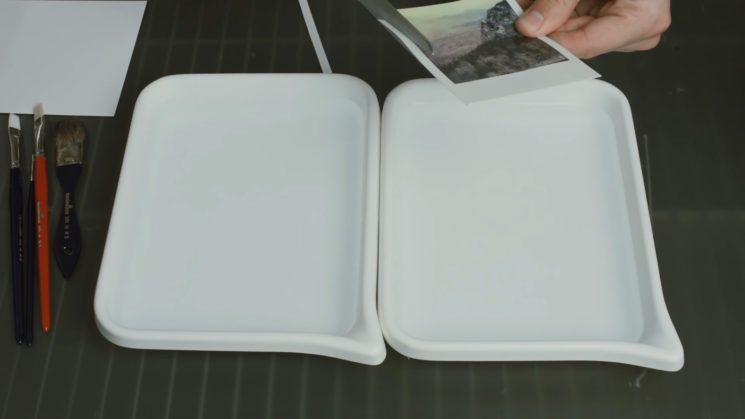 Then it’s just a case of peeling the image from the black backing.

The emulsion print sits underneath a plastic layer. This is what normally protects the image from finger prints and prevents it from being scratched. There’s also some white backing still underneath the emulsion. The lifting process separates out these remaining layers so that you have access to the image itself.

This begins by submerging the image in the warm water. Almost immediately, you can start to see white flakes in the water. This is the remains of the backing breaking free from the emulsion. The longer it soaks, and the more agitated the water, the faster it comes off. As this works free, the emulsion itself also starts to come away from the protective plastic coating.

Matt says that it’s usually fixed fairly well at one end, and might need some gentle coaxing with a paintbrush to loosen those last little bits. It’s a delicate process that you can’t rush, and in the video, it takes Matt around 4 minutes to fully separate the image from the plastic – including a bit in the middle that was sped up. 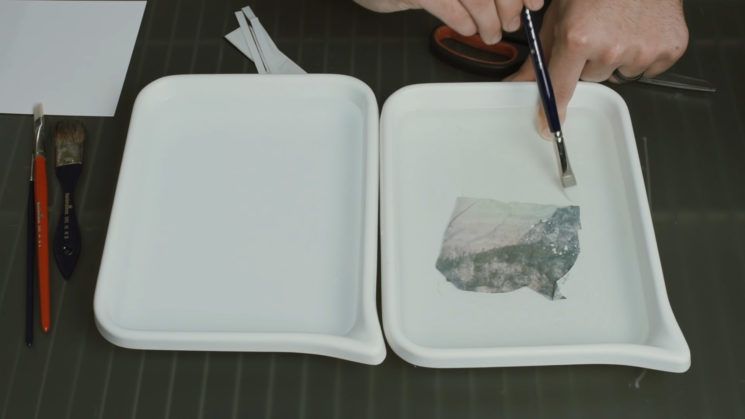 Once separated, it’s time to apply the emulsion to the new surface. You can see the image on the emulsion kind of just floats in the water, like ultra thin fabric. Matt places the paper into the water and again uses a brush to guide the emulsion onto the paper’s surface. 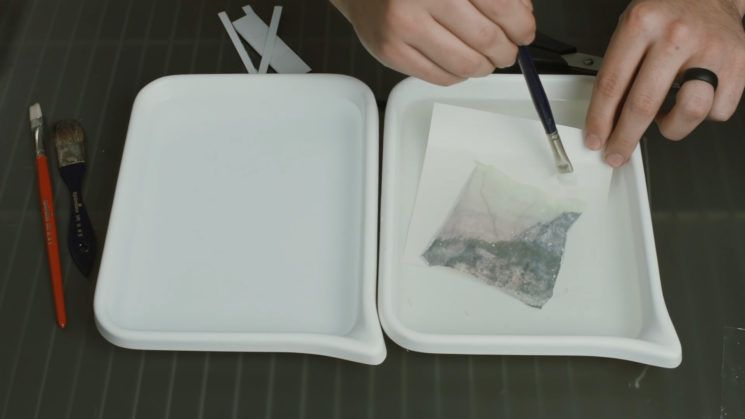 Once the image is approximately in the final position, and clear of remaining white backing specks, it’s time to transfer it over to the cold water. This lets Matt tweak the position, and flatten things out without worrying about all the bits floating around in the water in the other tub. Matt also says that it seems easier to work with in the cold water bath, as it starts to firm up a little.

Now, at this point, you can just leave it as it is and hang it up to dry, but Matt prefers to take a little more artistic approach. He uses the smaller brushes to break up the straight lines of the edge, creates folds, and even small tears. Finally, once the edges are the way he wants them, he gives it a final once over with the big brush just to flatten everything down again. 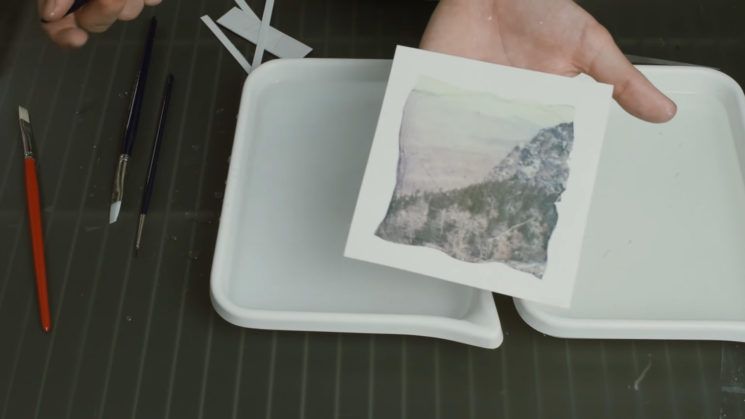 The final result is pretty interesting, and it definitely looks like a fun experiment in mixing mediums. Especially for those who like to work on their images with their hands rather than in the computer.

I’ve seen Polaroid emulsion lifts done before, and it always seems to go onto some form of white paper. It would be interesting to see how it looks or if this can be easily applied to other materials, too.

Have you done Polaroid lifts before? What surfaces have you transferred images onto? Do you think you’ll give this a go? Let us know in the comments

« RED Helium 8K sensor scores 108, highest ever on DxOMark
Meet the Minolta AF-Sv “Talker”, a talking camera from the 1980s »