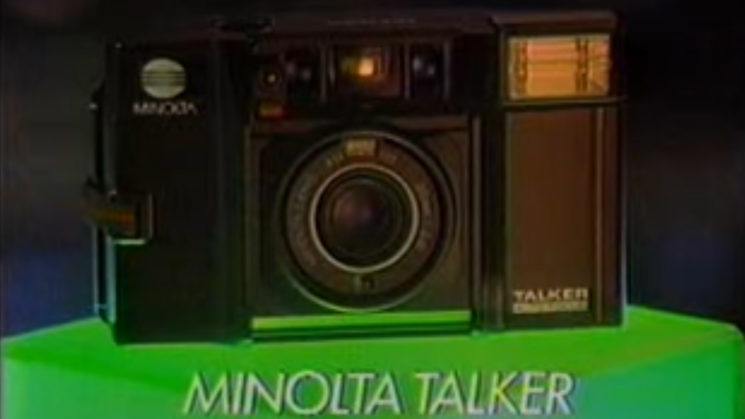 Being able to talk to cameras and other devices to give voice commands is a relatively recent development. What’s not so new is having our devices talk back to us. Check out this recent video of a Minolta AF-Sv “Talker”, posted to Reddit by user 240DL. Released in 1984, It features all of the minimalist features of compact cameras one would expect, but it also yells at you when you screw up.

Given the fully auto nature of these cameras, there’s very few things that you could actually screw up, though. Still, when you did, that condescending voice sure lets you know just how dumb you are!

With a voice like that, it can be difficult to understand why this camera failed. Clearly it was just way ahead of its time. I mean, with marketing like this, what other reason could there be?

Voice feedback is quite common, today. Probably largely due to GPS SatNav in our vehicles. Now, though, not only do our devices talk to us, but we can talk back and interact with them. Siri, Alexa, “OK Google”, that Windows woman I can never remember the name of, they’ve worked their way into our daily lives.

I recently found myself in possession of an EleCam Explorer Pro 4K (don’t get one, It’s awful and it’s not really 4K, either) and was actually quite surprised by the fact that it featured vocal feedback. It lets me know when I start and stop recording, when my battery’s running low, and various other things. It’s a very handy feature, especially with as little feedback as action camera UIs often provide. It’s a shame the camera itself is so bad, really.

What other unusual talking devices have you owned or seen over the years? What’s your favourite? What’s the funniest? What products could vocal feedback be useful for that don’t typically have it? Let us know in the comments.

« Transfer your Polaroid photos onto other materials using Emulsion Lift techniques
A wooden stump, a cookie sheet and foamcore – and you can make great food photos with your iPhone »