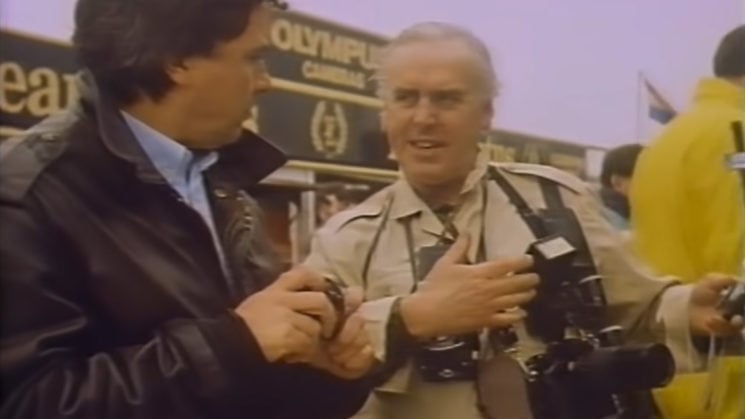 Those of us in the UK who grew up in the 1980s will mostly remember George Cole as the lovable rogue Arthur Daley in the TV show Minder, which ran from 1979 until 1994. But this wasn’t all he was doing. In the ’80s, he was also moonlighting in adverts for Olympus, along with legendary fashion and portrait photographer David Bailey.

These TV commercials advertise the fancy “new” all-in-one Olympus cameras, like the Olympus AZ 300 Super Zoom, Olympus Trip AF, and the Olympus AF-10, and they show that attitudes towards gear and elitism have never really changed. I think we all know people like this, even if just online if not in real life.

George Cole really personifies the “all the gear and no idea” type in these ads, while simultaneously showing a pretty elitist attitude towards gear. As well as subtly reminding people he’s a “professional” with that camera strap. But ultimately, he just looks like an idiot. But George excelled in playing this type of character. He was an excellent choice for the role.

Funny, though. Most people in real life or in Facebook groups with this sort of attitude still look like idiots today. I don’t think they’re doing it intentionally, though, as George did for his character.

When Iceland’s goalkeeper is not denying Messi, he is directing commercials for Coca-Cola