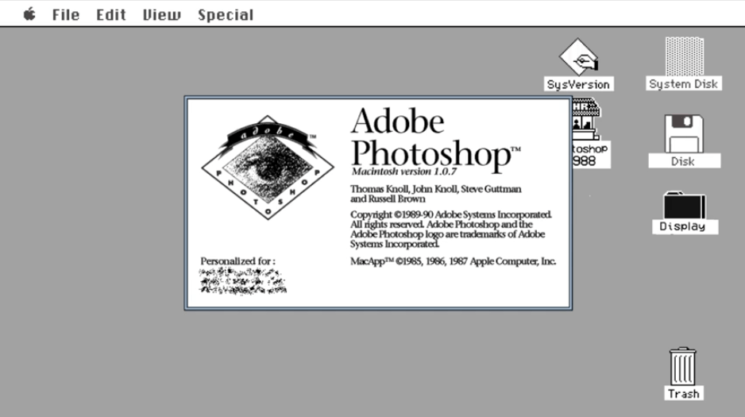 We all use Adobe Photoshop, at least up to some point. It’s definitely the most used photo editing software in the world. What’s more, it’s one of the world’s most used and most famous pieces of software in general. This short and fun video will guide you through 28 years of Photoshop in only 3 minutes.

Photo retouching had been used before, but in 1987, Thomas Knoll and his brother John had an idea of making it easier and more available – through a personal computer. They created software and named it Display, and John hoped that one day he would be able to use it for special effects in movies. In 1988, they changed the name of the software to Photoshop. At the end of the same year, they presented their project to Adobe – and Photoshop v. 1.0 was born.

The program has changed throughout the years, but some of its most iconic and recognized tools have been there from the very beginning – the Eyedropper, the Pencil and the Eraser, for example. It has also introduced some hidden features, such as recognizing and ignoring images of banknotes in v. 7.0.

As for the v. 7.0, it was the first to carry the name CS (Creative Suite), which was the umbrella term covering all of the Adobe’s creative apps. Today, it’s renamed into CC, and stands for Creative Cloud. And this creative cloud has over 8 million subscribers worldwide.

The word “Photoshop” is so recognizable and widely used, that Adobe is in danger of losing its copyright on it. In colloquial use it even became a verb, and as a linguist, I find this particularly interesting. I mean, who says that “the image was changed using Photoshop”? We rather say “the image was photoshopped”, right?

Although John Knoll hoped that he would be able to use Photoshop for special effects, we can’t say this software is actually used for it today. But still, John became a very popular and successful visual effect supervisor. He worked on special effects of four Star Wars movies, and I believe it’s quite awesome that he enabled us to create lightsabers, Jedi levitation and whatnot. We can create whole new worlds and stories using only our photos, Photoshop and of course – lots of imagination.

Do you remember older versions of Photoshop? When did you start using it? Which version worked best for you?

[A Visual History of Adobe Photoshop via Digital Rev]

Watch a single cell develop into newt in only six minutes