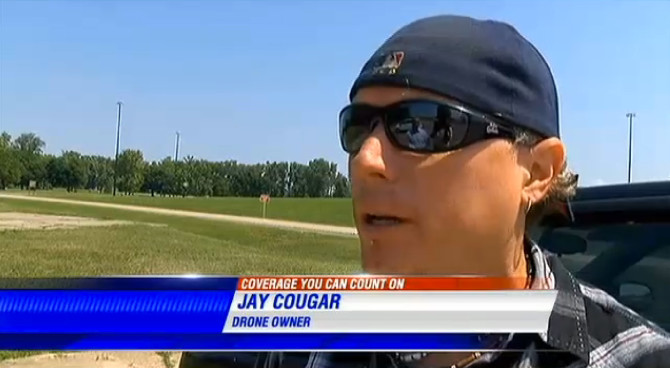 Last week, Photography Is Not A Crime published an article about a Shreveport, Louisiana videographer who was detained by authorities for flying a drone over a local VA hospital while on assignment for a local newspaper. This brought screams of “tyrants” and “carry a gun” from Internet commenters, as most logical people in today’s screwed-up world can imagine. Mickey Osterreicher, renowned media lawyer and general counsel for the National Press Photographers Association, even weighed in on the subject, his comments being published in PINAC’s original article.

However, after all the fanfare had died down and the Internet trolls put away their pitchforks and migrated back to Reddit, little was heard about the case which “went to trial” last Friday. In fact, when I spoke to Jay over the phone, apparently I was the first person to give a rat’s tookus as to the outcome of his plight and the first to see how our brother-in-arms was doing.

As with so much across the Interwebs, facts seemed to be a little skewed in favor of the sensational. I mean, how else are you going to inspire a nation of photographers to take up arms against their government? So, I took it upon myself to speak with Mr. Cougar myself (not in-person…my G5 is down for maintenance right now). Allow your Bastion of Truth to elaborate:

No camera cards were confiscated

According to Cougar, his camera card, which contained eight photos of the hospital roof and solar panels (what the newspaper article was focusing on), was willingly surrendered to authorities. There was no fight, there was no antagonizing, there was no arguing over civil liberties.

These were not rent-a-cops

Various commenters seemed to assume that the officers who questioned Cougar were mall cops who were experiencing a lull in their daytime soap operas or local authorities with egos that needed some stroking. However, according to Cougar, these were Federal law enforcement personnel, fully armed with bullet-proof vests and fuzzy dice hanging from their badges*.

*Fuzzy dice not confirmed, but we made our own assumptions.

“On assignment” is a bit liberal

According to Cougar, he is personal friends with the owner of The Inquisitor, the newspaper he was allegedly on assignment for. This friend allegedly called in a favor and asked if Cougar would be willing to grab a few photos of the new solar panels which had recently been installed on the VA hospital roof. No compensation was discussed. They are friends…like, the kind of friends who happily oblige when told, “Here, hold m’ beer.” This was not a commercial, paying gig.

Was NEVER a First Amendment Issue

Contrary to the slant of various outlets and opinions of commenters, this had nothing to do with impeding Cougar’s First Amendment rights – this was an issue of him not obtaining proper permission before flying into restricted airspace. Add to this the fact that, while Cougar took off and landed from outside the hospital property, he was required to go onto the property to adequately maneuver his aircraft, and he claims authorities could have nailed him with a whole lot more had they wanted to (including invasion of privacy of patients at the hospital, as far-fetched as that may sound).

This was the most exciting case in Federal Court

Because the transgression took place on Federal property, the case was heard in Federal court. According to Cougar, his case was the most exciting and egregious one to be heard in court that day, alongside those of trespassers and litterers. In fact, upon entering the courtroom, he was allegedly informed that, because of the attention already garnered by his case through various outlets, his would be heard last so as to not incur additional hype. (Again, probably a lull in daytime soap operas…)

Cougar was prepared to argue his case in court, although he declined hiring a lawyer because the cost for a suit to show up in court, let alone argue anything worthwhile, far outweighed the potential $400 fine he was facing for the eight photos. At his hearing, he was asked to enter a plea of guilty or not, and, after being shown the potential bill for his fine plus court costs, Cougar found it rather expedient to simply plead guilty and pay his fine…a fine which totaled $50 for unauthorized photography and $35 in court costs (or, a total of $85 for the mathematically-challenged among you).

“Where art thy pitchforks now, brethren?”

There…really…wasn’t…any… Cougar was handed back his memory card with photos intact and has to mail a check to the appropriate office for his fine. That’s it. No arrest; no threats of further action; no water-boarding of family and friends to extract information…just pay $85 for not obtaining proper permission to fly in restricted airspace, and move on.

While I was on the phone with him, Cougar was on his way to do more drone videography, this time (pro bono) for his local Channel 12 news station who had covered his story previously. Like they say, even bad publicity is still publicity.

What this means for photographers at large

I really hate to be the rain on your indignant parade, but the answer is: not much, really. When photographing, whether for business or personal purposes, be sure to follow the law. Should you choose not to, be prepared to accept the possible consequences. And, in case you haven’t heard, flying a drone, especially in an urban environment, is certain to draw attention. Be forewarned.

Are you guilty of making these 7 landscape photography mistakes? I know I am