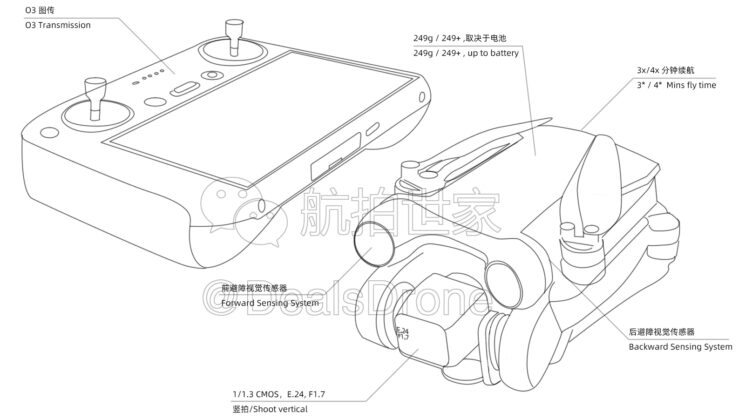 We’re only 16 months out from the release of the DJI Mini 2 but people seem to already be expecting the announcement of a DJI Mini 3 at some point during April 22. There are no hard facts to back this up yet and there’s obviously been no word from DJI – not even a teaser or mention of an upcoming event – but already we’re starting to see rumoured spec lists.

I picture was posted to Twitter by serial DJI leaker OsitaLV which was then followed up by some dissection, combination with previous rumours and a little guesswork by DealsDrone, resulting in a specs list that may be close to the truth or it might be a work of absolute fiction. Even DealsDrone says that the specs are a guess but it seems like it might be possible, especially with competition like the Autel Evo Nano and Evo Nano+ now on the market.

Like the Autel Nano and Nano+, the DJI Mini series sits in that sub-250g category, which allows operation in many parts of the world without the usual licensing requirements and restrictions of regular-sized drones. 250g doesn’t allow for a lot of tech to be packed into them, but as that technology has advanced, manufacturers have been able to fit more inside them. Things like obstacle avoidance (which the Evo Nano drones can do and the Mini 2 can’t), which is something that the current spec rumour suggests is being added to the Mini 3, amongst other things:

Obstacle avoidance has been sorely lacking from this class of drone from DJI. Given that Autel added it to theirs, it makes sense that DJI will now be looking to bring the feature to the next generation fo Mini. Looking at the original image posted by OsitaLV, though, on which the above diagram is based, even he seems to think that it’s a bit of a joke and that this isn’t how the DJI Mini 3 and its controller are going to look.

Before further confirmation, I'll regard this pic as joking. pic.twitter.com/En7LIBv1jf

Whether or not the drone will look like this, though, remains to be seen. It does present a somewhat drastic design change over previous Mini models, but if they’re going to start incorporating things like obstacle avoidance, it makes sense to switch things up a little bit. One thing that I can’t see DJI doing on a drone in this class – unless they’re planning to drastically bump up the price, is alter the controller to look like that with a massive built-in display.

But, with the release of the DJI Mini SE, maybe they’re branching out the Mini series into two separate lines, as Autel has done with the Evo Nano and Evo Nano+. Maybe we’ll see the Mini SE line continued as the basic entry-level and the Mini as a more advanced (but not quite as advanced as the DJI Air series) product line?

I’m sure we’ll find out DJI’s plans at some point when they’re ready to officially announce them. And even though rumours are suggesting a possible announcement next month, an actual statement from DJI could be a very long way off. It wouldn’t be the first time the rumour mill was wrong about announcement dates from DJI.

What hypothetical specs would make you buy a DJI Mini 3?

« This Ultimate Guide to Lightroom’s Smart Previews helps you edit on the road without external storage
Laowa’s new 7.5mm T2.9 Zero-D is the world’s widest rectilinear Super 35mm cine lens and it’s only $699 »