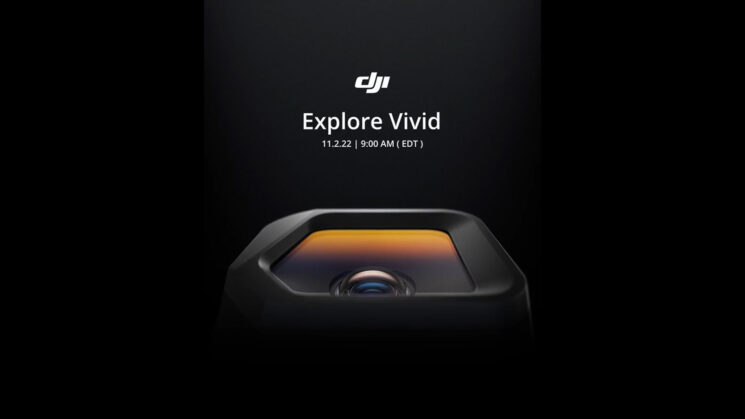 DJI has posted a new teaser to Twitter and put up a trailer page on the DJI website for a new product announcement event on November 2nd. Along with the date and a 9am Eastern start time for the event, we also see the slogan “Explore Vivid” and a picture of what looks like the Mavic 3 camera but with a single lens.

A filing with the FCC was recently published for a Mavic 3 Classic drone and the image in the new teaser looks pretty much identical in form to the images leaked a couple of weeks ago. So, I think expecting it to be the Mavic 3 Classic announcement isn’t unreasonable. It’s expected to be a cut-down version of the existing Mavic 3 line, with the same design and mostly the same electronics but with a single camera for a lower price.

Removing the telephoto camera from the Mavic 3 seems to be pretty much the only big difference between the DJI Mavic 3 and the upcoming Mavic 3 Classic. It’s still expected to offer 12-Bit DNG RAW stills, 5.1K video at up to 50fps and 4K at up to 120fps. The remaining camera seems to be the current Four Thirds CMOS sensor with the 24mm equivalent f/2.8-11 lens – although it’s been sug. It will be interesting to see if the removal of the second camera reduces the weight at all and affects stability or flight time as a result.

Although it’s expected to be released at a lower price, I probably wouldn’t expect it to be too low. DJI isn’t going to want to cannibalise sales of the DJI Air 2S, which currently sits at $999 for the basic drone or $1,299 for the Fly More Combo kit. Even the top-end DJI Mini 3 Pro kit costs around $1,160. The basic DJI Mavic 3 costs $2,049, so I think we can probably expect the Mavic 3 Classic to start at around $1,300-1,500 and go up from there for Fly More Combo and other kits.

There are still five days to go before the official announcement and this is DJI, so I expect we’ll see more photos and information leaked between now and then, so we’ll keep you posted as we spot any.