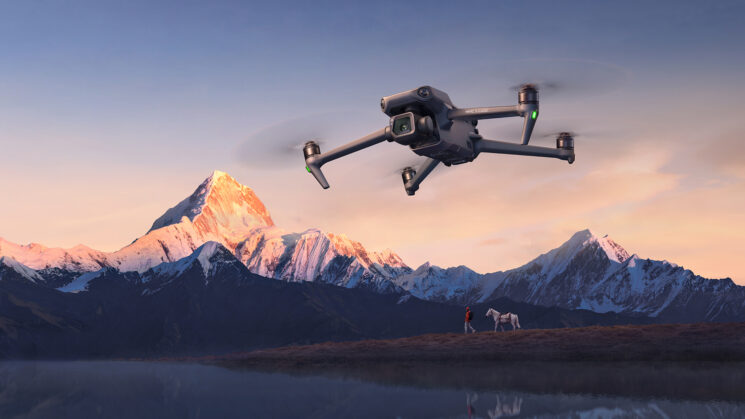 DJI has now officially announced the new DJI Mavic 3 Classic. It’s the latest drone in the Mavic 3 line, falling at the lower end of the price range, adding to the standard Mavic 3 and the Mavic 3 Cine. The new Mavic 3 Classic is largely the same as its more expensive siblings, but with one key difference. It still features a Hasselblad-designed 20-megapixel 4/3″ camera with a 24mm equivalent focal length. But that’s the only camera it contains.

It offers the same 46-minutes of flight time, the same 5.1K video at up to 50fps and 4K at up to 120fps, with 20-megapixel stills in DNG RAW or jpg. It has the same 100-6400 ISO range for both photo and video with shutter speeds from a quick 1/8,000th of a second up to a long 8 seconds. It also features 8GB of internal memory. It would be pretty silly to expect the 1TB internal storage of the Mavic 3 Cine, though.

The microSD card slot max capacity is a little odd. The spec sheet I’m looking at right now for the Mavic 3 Classic says 128GB is the limit. But looking at the specs for the regular Mavic 3, it has a hypothetical limit of 2TB – I say hypothetical because 2TB cards still don’t exist yet. Whether or not 128GB is just a tested “safe” limit and it can actually access larger cards is unknown, but 128GB can fill up pretty quickly with 5.1K footage.

The DJI website, though, does list some specific cards that it recommends for use with the Mavic 3 Classic, and a couple of those seem to exceed the 128GB mentioned spec sheet I’m seeing, with some showing capacities of 256GB. The regular Mavic 3 page, though, lists some recommended 512GB cards that aren’t mentioned on the Mavic 3 Classic page. I guess we’ll find out the real maximum as people start to test it with larger capacity cards.

The Mavic 3 Classic’s solo camera still provides the 24mm equivalent focal length for an 84° field of view. It has a variable aperture of between f/2.8-11 and a minimum focus distance of 1 metre. The gimbal, too, still offers the same -90° to 35° pitch and -5° to 5° yaw. As with the regular Mavic 3, it also sports downward, forward, backward, left and right vision sensors for obstacle avoidance.

In fact, it is pretty much identical to the Mavic 3 except for having one camera instead of two. The Mavic 3 Classic is available to buy in three different packages. Essentially, the only difference between them is the remote. One doesn’t come with a remote at all, one comes with the standard RC-N1 remote and one comes with the DJI RC Remote. There are a couple of optional extras, too, like the DJI ND Filter Kit, which contains 3, 4, 5 and 6 stop NDs, as well as a Wide Angle Lens, expanding that field of view up to 108° for a 15.5mm equivalent focal length

The DJI Mavic 3 Classic with no remote is available to pre-order now for $1,469. With the RC-N1 remote, it’s $1,599 and with the DJI RC Remote, it’s $1,749. It’s on the higher end of the price guesstimate range that many had thought during the rumour phase, but the prices don’t seem unreasonable. A DJI Fly More Bundle for the Mavic 3 Classic is expected to become available soon for $649 that includes two intelligent flight batteries, a charging hub, a car charger, three pairs of low-noise props and a DJI Convertible Carrying Bag.

« Google Lens is now an integral part of every Google image search
Fujifilm’s X-T5 features the 40MP sensor from the X-H2, with 6.2K video and 1/180,000th of a second shutter speeds »