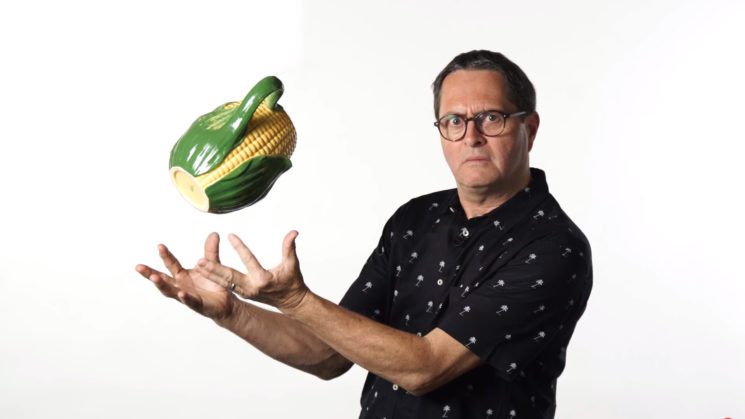 Levitation is an often visited subject for both stills and video. It’s often done with human subjects using some fancy Photoshop compositing work. But it can be done very simply with every day objects, too with just simple fishing line.

Photographer Jay P. Morgan showed us what he keeps in his tackle box a few weeks ago. In this video, he goes a little more in-depth into how to actually use it all to suspend objects. He talks about various methods of attaching the line to your object, and other things to consider when trying this. Using fishing line is a great method as it’s often invisible, requiring no post work to remove it.

The first, and most obvious point is to ensure that whatever fishing line you’re using has a breaking strain greater than the weight of your object. Putting a 5lb object on a 2lb line means your object probably won’t be levitating for very long. But using several strands to secure the object at multiple points can also work. It also means that your object is more stable in the air, too, and less prone to spinning.

Jay starts by tying off one end of a piece of fishing line to the handle of a jug. He doesn’t state specifically what type of knot it is, other than a “fishing knot”, but from the description it appears to be some kind of clinch knot. It’s a very strong knot that isn’t likely to come apart easily under the strain of a load.

For the second piece of fishing line, there’s nowhere to tie it off. So, Jay uses hot glue to create a strong and sticky mess into which you can embed the fishing line. You will, of course, want to make sure that the glue has completely cooled before you attempt to lift the line. Otherwise, it’ll just pull straight out. If, like Jay, you’re impatient, you can use compressed air to cool and harden the hot glue quickly. 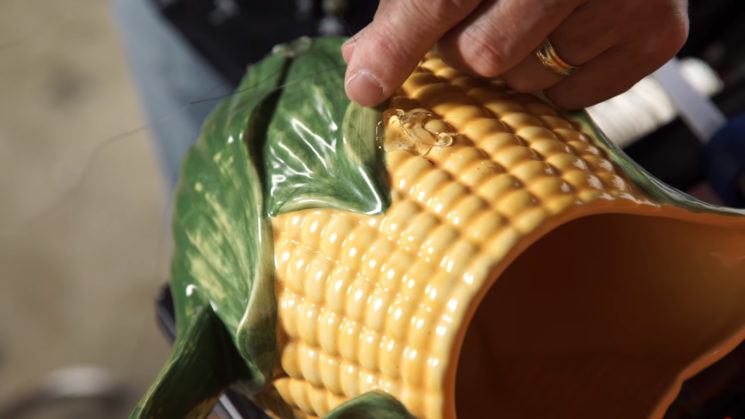 Depending on the weight of your subject and the thickness of the line, there are also other glues that will work. Jay specifically mentions Hot Stuff glue, but depending on what the object is you’re attempting to suspend, certain glues can react with some materials. Some glues are also permanent, whereas others can be “released” to remove the line from your object after you’re done. So, do your research.

A common method of hanging multiple items is to attach chicken wire to the ceiling. This gives plenty of options for controlling the placement of objects and exactly where they’ll appear in your shot. For this example, though, Jay just uses a C-stand with a boom arm. He doesn’t tie the line to it, though. He has a special trick to attach the line to the C-stand. 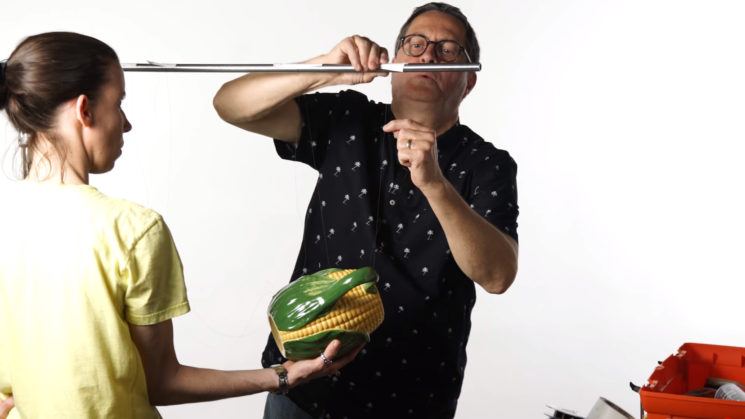 Put simply, he wraps the fishing line around the boom arm several times, and then covers it in gaffer tape. This might seem a bit like cheating, but it’s actually quite clever. Wrapped around several times, the tape will hold it well. But it allows for very easy adjustment. How many times you have to wrap the line around, though, will depend on the weight of your object, and you’ll want to make sure it’s good quality gaffer tape.

Tying off the line makes it difficult if you want to adjust the height of the object, or the angle at which it’s being suspended. Having it held simply by a piece of tape means that you can just pull it off, slide the fishing line up or down to adjust the angle, and then retape it.

And that’s pretty much all there is to it. You can see in the video that the fishing line does become visible at certain angles. But depending on the background and the lighting you’re using, it’s fairly easy to make it invisible.