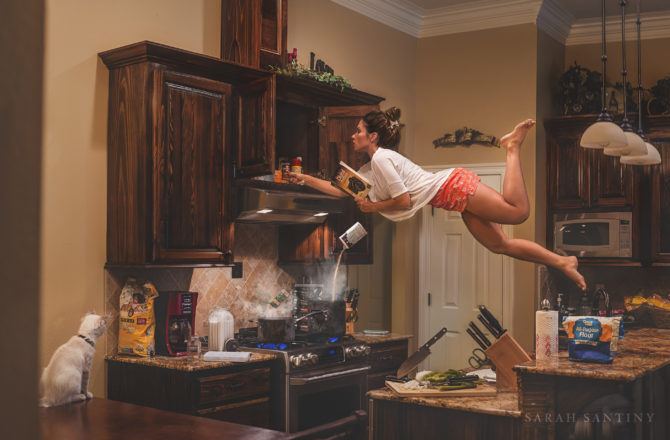 For most of us, it seems like there just isn’t enough time in the day. With a little help from Photoshop, photographer Sarah Santiny found the perfect multitasking solution. This really is levitation photography taken to the extreme.

When I saw the above image scroll though my Facebook feed, it drew me right in. The idea is fantastic, and the execution equally as good. So, DIYP got in touch with Sarah to get some insight into how the idea came about and was made.

As with most creatives, when I have a concept in mind it will distract and consume me until it becomes a reality. I wanted to create a conceptual self portrait that was dreamlike, surreal, and relevant to an inner conflict in my life.

As a stay at home mom to my two young children, I’m constantly battling between following the urge to learn and grow as a photographer/business owner and handling my responsibilities as Supermom.

Looking at one’s personal life and circumstances is always a great way to find inspiration. But, as a busy “Supermom”, time is often short. So, we have to take our chances when we get them.

Although I did have a concept in mind for weeks, there wasn’t much planning involved. It was a pretty spur of the moment, drop everything, gotta do it now type of project. I put my kiddos down for their afternoon nap and started to bring it to life.

Obviously, levitation shots aren’t just a case of pointing the camera, and then jumping with a remote trigger in your hand. Although, that can sometimes work. Usually, they require a little more effort and equipment, multiple shots, and time in Photoshop.

Levitation photography involves taking two or more photos, one of the background and one with the subject(s) in the scene, usually posed on a chair/stool. All the shots must be taken in identically exposed, focused and framed. For this reason, a tripod is essential to the success of a levitation portrait.

Sarah’s equipment for this was, as you’d expect, quite minimal. A Nikon D610, 50mm f/1.8 lens, tripod, remote tigger, ladder, string and some props.

For the concept to work, Sarah knew she would need to be as high off the ground as possible. So, she chose a spot for her tripod that would provide plenty of space.

I moved around my kitchen test shooting different compositions and chose a spot to set up in my hallway. Using manual focus, I chose a focal point near where I knew I wanted my face to be and set my exposure. I attached my wireless remote to my camera and tested my remote.

Once everything was ready, I turned the burners on and took several shots of my plain ole kitchen. These would serve as my background in post. 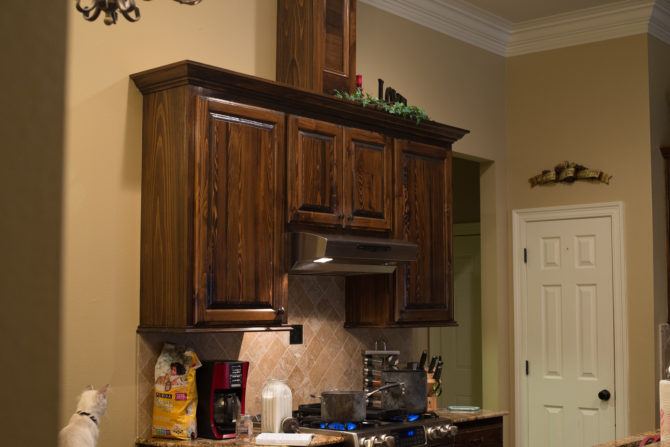 I quickly noted the focal length of my 50mm lens wasn’t giving me as much space and “air” in the frame as I’d envisioned.

To fix that, I decided to experiment and break the “identical framing” rule. I used my tripod to slightly pan the camera left and right, and moved it up and down, taking shots of each section of the room. I was planning to “stitch” them together in post to expand my background to include the whole room.

Stitching adds another level of complexity to composites like this. The nature of stitching, whether it’s in Photoshop or something else, distorts each image to make them fit. This can easily throw things out of alignment.

Next, I grabbed our ladder out of the garage and set it up. With my photography book and remote I climbed up and got into position. I felt the ladder wobbling and it occurred to me that this wasn’t my brightest idea. I imagined explaining to the emergency room triage, “Well, I was trying to levitate!” Ha!

I tried a few different poses and took as many shots as possible hoping to avoid having to climb up and down more than once. I got down to review my shots but I didnt have “the one.” Determined, I climbed back up and tried again, adjusting my pose as best I could. This time I got one I was happy with! 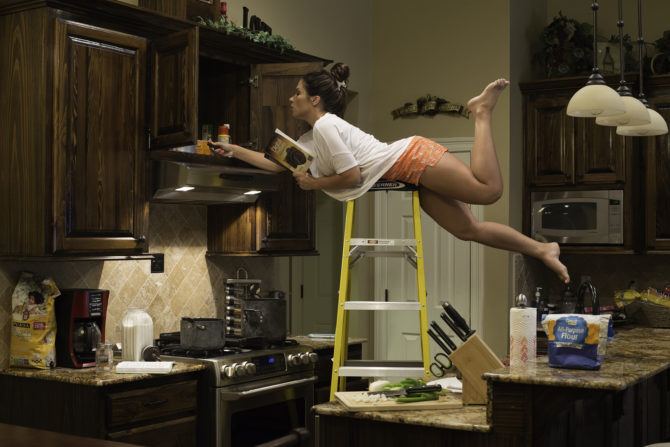 Between stitched images of the environment, and then compositing multiple other images on top, it sure adds up to a whole lot of work in post. Sarah offered some pretty in-depth information into how she went about things.

As I imported my images into Lightroom, I noticed my cat had came into a few shots to get a closer look. I knew she would add a special touch… I had to incorporate her! 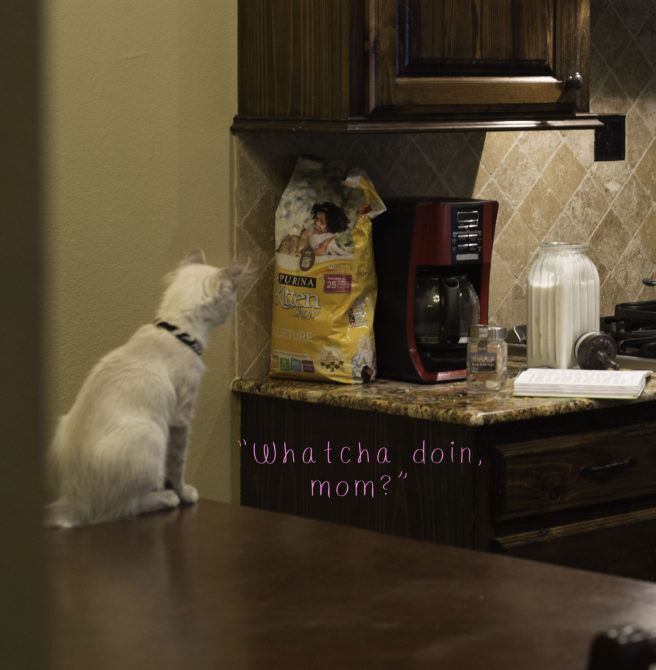 Keeping in mind I wanted to combine several images of my background to stitch together, I selected a photo of each part of the room.

Below: Center image is my main background. The rectangular sections of the surrounding images were composited together expand the scene.

I made basic adjustments in contrast, clarity, sharpened them, and matched tones, etc. I exported them into Photoshop to begin combining them.

If I am combining images or expanding a background, I always increase my canvas size first to give myself space to work. That way I can use the move tool and drag all my images into one document without too much crowding. Not all of them lined up as seamlessly as I’d hoped but lots of tedious masking and cloning techniques did the trick.

Once the background was to my liking, I opened the image I chose of myself “flying” on the ladder. I made all the same adjustments and I used for my background images.

To bring it all together in Photoshop, I dragged the “flying” image onto the background image. I selected the background layer and put it on top and added an inverted (black) layer mask. Using a white brush, I painted the background back in underneath my body, completely removing the ladder and being careful not to paint off any of the subject matter. Now we are getting there! 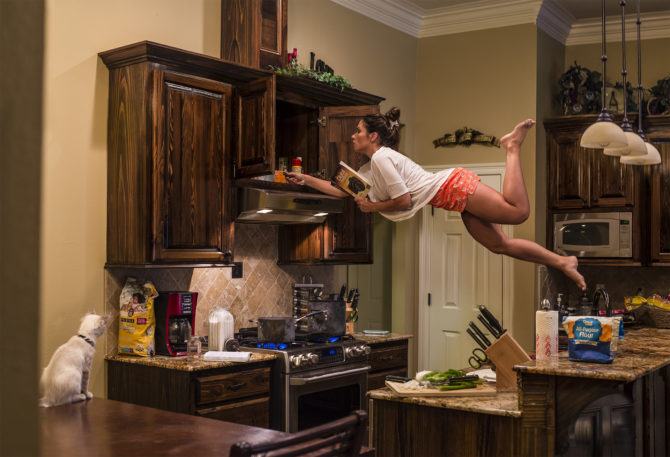 I noticed my remote was visible in my right hand. I decided the quickest fix would be to climb back up and take a shot of my hand holding something relevant. Then, I used the same masking technique to paint the new image of my hand over the original.

I didn’t plan on incorporating any of the floating elements but I felt it was lacking the hectic multitasking and chaos I wanted to portray. I grabbed some seasonings and tied some string around them, leaving enough length to dangle. Finally, I used the remote to shoot a few shots holding them over the pots on the stove.

For the knife, I took one shot holding it by the handle and one holding it by the blade. I imported these into Lightroom and gave them the same adjustments before pulling them into photoshop. I masked out the string and combined the knife images making everything appear to float. 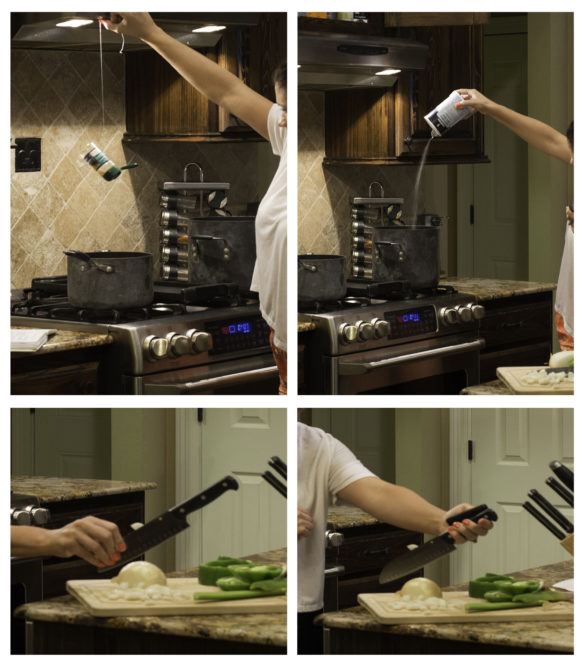 For the steam, I found a free smoke brush. After the composites were all complete, I made some final adjustments & voila! I named this “Multitasking.”

Well, the hard work certainly seems to have paid off with a great final result.

Sarah’s story is another great example of not letting one’s circumstances hold their photography back. Much like yesterday’s post, we see once again that it’s possible to create while low on time.

Thank you, Sarah, for sharing with us. If only real life could be handled as easily as the image portrays.

Have you tried levitation photography? What challenges did you face? Let us know, and share your images in the comments.