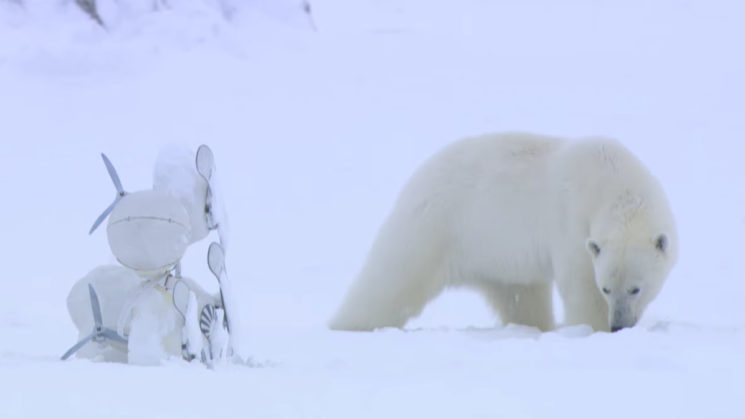 It’s all you need, really. There you are, in the middle of a field of ice and snow, filming polar bears and their not-so-subtle courtship ritual, and one of your cameras topples over. In this case, the remotely controlled “Blizzardcam”.

Riding on mini skis and propelled by a couple of fan blade motors, the Blizzardcam took a topple going over a bank of snow. It did not escape the notice of the curious courting polar bears. It’s a cute and interesting interaction, made all the more humorous by David Tennant’s narration.

The clip is as intriguing, amusing and well produced as we’ve come to expect from the BBC. Right up until the camera fell over.

While not all interactions between animals and cameras go quite so well, here it seems that the polar bears were quite happy with the voyeuristic BBC crew. They interrupted their “activities” to investigate the strange device.

After giving it a good sniff, one of the polar bears flips the camera upright allowing it to carry on filming.

It’s interesting to see how gently it flips the camera back over. Perhaps it thought it was some sort of animal that was in distress. Or, less likely, maybe they’re just exhibitionists who like to perform for the camera.

Whatever the reason, we wish the happy couple a glorious three weeks.

How to suspend objects in the air for photos and video