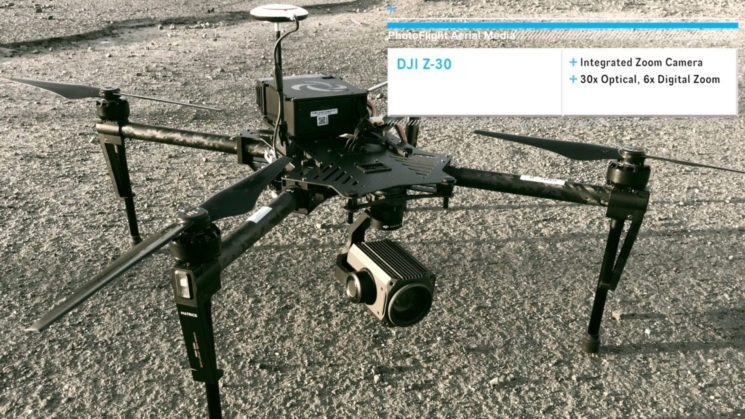 When DJI announced its Zenmuse Z30 camera a few months ago, it looked mighty impressive. Full remote control 30x zoom from your tablet or smartphone connected to your controller. You can’t exactly stick this thing onto your average consumer DJI drone, though, not even the new Phantom 4 Advanced. Aimed at industrial and commercial use, it designed for the Matrice series.

With 30x optical zoom and 6x digital zoom, it has a lot of potential. But with that kind of zoom, there were a few concerns about just how stable it would be at that sort of range. Well, they’re out in the wild now, and this test footage from PhotoFlight Aerial Media shows just what it’s capable of.

Zoom on a drone camera is a relatively new and still rather expensive proposition. It’s intended purpose is for indstrial use, to aid with dangerous inspections where physical human access might be difficult. Building inspections, surveying areas and checking structures after a natural disaster, that kind of thing. And judging by the footage above, it’s perfectly suited such tasks.

The stabilisation at such a long zoom range seems to cope amazingly well. It does look a little jittery in places, but I think much of that can be attributed to the heat haze mirage effect. This effect is also often seen when using extremely long lenses on tripod mounted DSLRs, too.

I’ve still yet to find an official price listed for the Z30 (it’s still not listed on the DJI store). Most of those who have it for sale want you to phone for a quote. But I did find it on one British retailer’s website for £7,999. Given the $899 price tag of the Zenmuse Z3 with its 7x optical zoom, that might be the better option for many.

Hopefully, now that DJI have proven the idea viable, others will start to release cameras with zoom capability. But, for now, the privacy advocates will probably be pleased that the Z30 outprices most hobbyist drone users.

« Do you have your favorite landscape?
Watch: this music video creates new contexts through unimaginable diptychs [NSFW] »