While Slite’s claim of being “the world’s most portable light for creators” might not be entirely accurate (there are a lot of small portable lights out there for creators these days!), this new LED light currently running on Kickstarter does look rather interesting. It’s an ultrathin panel about the size of a laptop, runs off a Type-C USB power bank, has a magnetic back and offers the full RGB spectrum as well as 96+ CRI/99+ TLCI white LED lights.

At only 14mm thick, these continuous LED panels can fit into very tiny spaces, and thanks to the magnetic back they can easily attach to metallic surfaces. You’ve also got a couple of 1/4-20″ attachment points for sticking it on a traditional light stand or articulating arm. Once up and running, it offers 16 million colours and you can control one or multiple lights easily from a smartphone app. 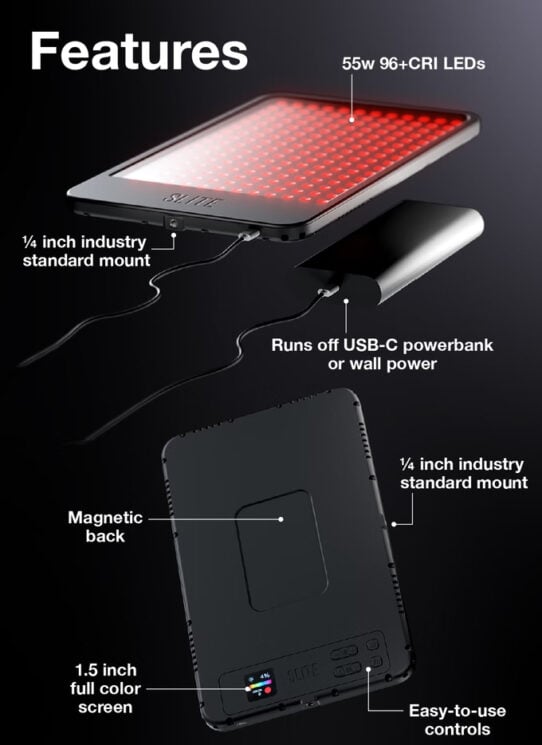 As well as app control, there’s a 1.5″ display on the back of the panel with an array of control buttons next to it. So, if you just need to set up one panel quickly, you don’t need to mess around with the app and can control everything directly on the light itself. It has a light output of 55 watts and Slite says that the RGBWW LEDs used in its construction were built from scratch.

While 55 watts might not seem like a massive amount of power when you look at some of the powerful Bowens mount LED lights being released today, the fact that you can get these in so close to your subject means they can still put out a decent amount of light on your subject for photos and videos. If you just need something for lighting your latest Skype, they seem pretty ideal, but you can also use them for things like product photography or even interviews. 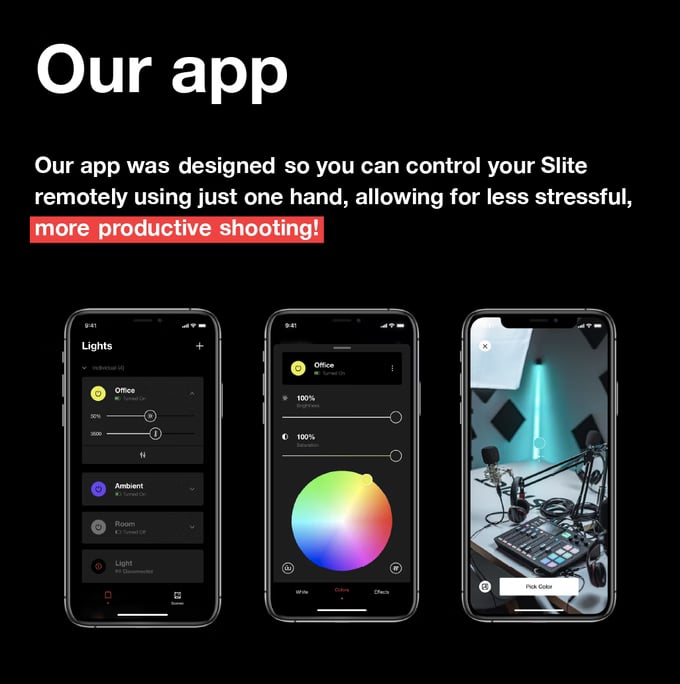 The Slite app has a range of 800 feet (240 metres) with direct line of site or 130 feet (40 metres) indoors and the lights communicate using Bluetooth 5.0, which they claim offers zero latency for real-time adjustments – very handy if you want to adjust your colours or settings in the middle of a shot. And you can also save presets to let you do exactly that in just one tap with one or multiple lights. The app even includes a colour picker, letting you match colours and other light sources that may be in your scene to provide a consistent look throughout your shot.

There are also a number of effects built into the light, including police car, disco, fire, candle, strobe, paparazzi, faulty globe, TV, lightning, fireworks and neon sign. All pretty standard effects found in many lights these days, so they’re more of a keeping up with the competition thing than a feature over the competition.

Slite weighs 895 grams, measures 342 x 208 x 14mm and as well as the 16 million RGB colours, offers a bicolour temperature of 3000-6200K with a 96+ CRI and 99+ TLCI. It features silent passive cooling, which is very handy for those video conferences and interviews where you really don’t want your microphone picking up fan hum from your light sources, and a beam angle of 120°

Slite does not have an internal battery and requires a minimum of a 60W Type-C USB Power Deliver (USB-PD) power bank or wall charger in order to run. This will probably be the biggest challenge for many people as most USB-PD power banks on the market today are 18W or 45W. 60W ones are out there, but they’re still quite expensive and as you need one for each light source (as these types of power banks only have a single Type-C USB-PD output), that can add to your total cost very quickly.

As mentioned, it’s currently running on Kickstarter, with the lowest pledge currently at AU$346 (around US$250). Regular retail is expected to be around US$400. But, there doesn’t seem to be much of a company presence out there on the Internet outside of an Instagram account. They have no website and there already appear to be at least a couple of other companies and products out there called Slite – some of whom also happen to be lighting companies.

It certainly looks like an interesting light and it’s already smashed through its modest goal. The company aims to begin production in May, with shipping in July 2022. But without any kind of online presence that leads back to a real company – even the slite.co domain name in their Instagram description leads to a bit.ly redirect page, not even a real landing page – I’d be dubious about backing it myself.

If you choose to back the campaign, make sure you do your own research into the company and approach with caution!