After a 600-Watt light from Aputure and a 700 Watt from Maxima, Nanlight is introducing a 1200 Watt beast – the Evoke 1200 LED Spot Light. And it truly is a beast. Under the square body lies a 1200 Watt COB LED. It will offer either daylight (6500K) or tungsten (To be announced) flavors. While you probably want the light to be Bi-color, you have to remember that with Bicolor lights each of the temperatures gets half the surface. The Evoke 1200 is using the entire LED chip. As with most COB lights, this light has a 120 degrees angle and a proprietary modifier mount. 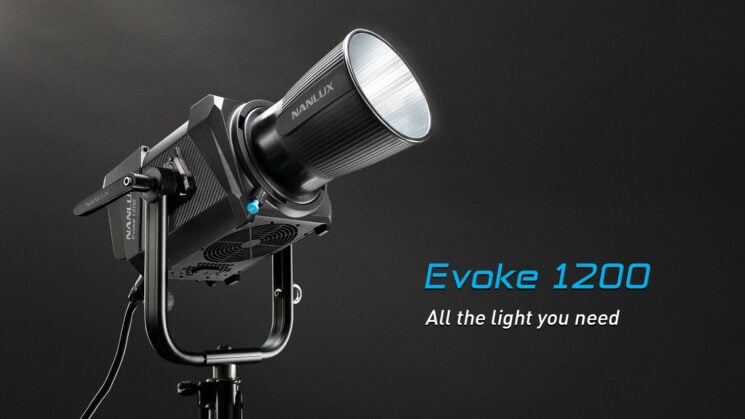 In terms of output, according to Nanlux you’ll get 18,400 Lux with the included 45° reflector (@ 3 meters) and a crazy, 65,280lux with the Fresnel Lens Spot (@3 meter again). I can not share how insane this about of light is. Just slap a batman logo on the fresnel and the Batman will come. Nanlux compares it to a  1.8kW PAR or a 2.5kW HMI Fresnel. And all this power comes with a 0.1% controllable increments. Just like many of the other lights, the Evoke 1200 LED is powered with a ballast. Understandably, we did not spot any battery options.

If you are willing to settle for about half the power, here is a comparison of the next-in-line video LED spots. 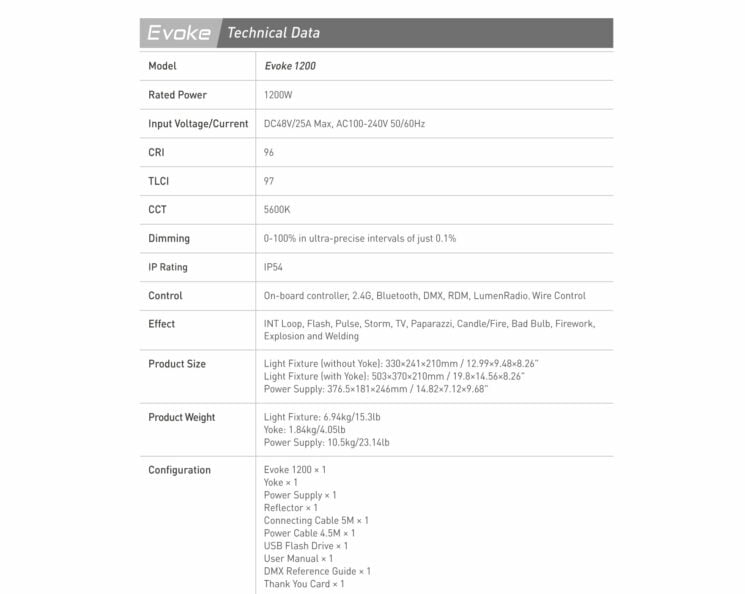 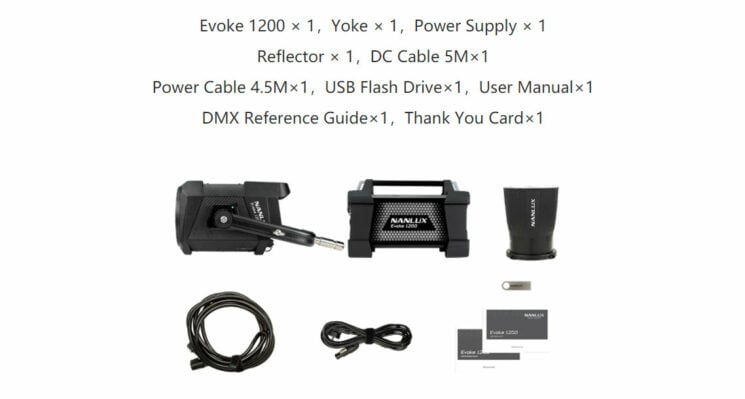 The Evoke has a proprietary bayonet for lighting modifiers. It looks similar to the Bowens mount but with four “Tabs”. This means that you will have to buy modifiers from Nanlux or adapt your existing modifiers. This includes a new Nanlux F-35 10° variable Fresnel that can shift from 45° to 10° of throw.

Among the other lighting modifiers are your standard barn doors, lantern, an array of softboxes, and an impressive four-light fixture

The Evoke 1200 looks very similar to the Forza 500. It shares a similar square body with a yolk mount and a fan behind a honeycomb.  The fixture with yoke measures 19.8 x 14.5 x 8.3″ which is not very big considering the amount of light it produces. The Evoke 1200 is rated for IP54 which means it can withstand light rain. This is a bold claim for something that draws 1200 watts, but it means that it is geared towards rugged usage.

Control-wise, the light can be controlled both by wire or by Bluetooth with the Nanlink APP, DMX/RDM, Bluetooth, and the Lumenradio TimoTwo.