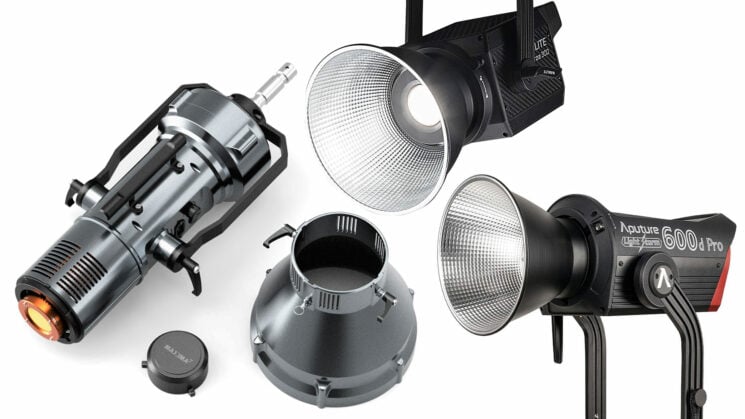 Having been initially announced in February of last year, the Maxima 7 LED light was finally released yesterday. In the time since the Maxima 7 was first announced and now, though, the top lights in that sort of category have been the Aputure 600D Pro and the Nanlite Forza 500. So we thought we’d take a look at the specs and see how each of the three lights stack up against each other on paper.

Now, the real proof will come when the Maxima 7 starts getting into the hands of users who can actually do these side-by-side comparisons for real, but this might give you some clues as to which you might want to go for, depending on your needs.

Looking at the specs side-by-side, despite having slightly different wattage ratings, there isn’t that much difference between them, depending on your needs. Of course, the Maxima 7 is significantly more expensive than the other two, but it does come with a pretty beefy Fresnel lens modifier.

For the other two lights, that Fresnel modifier is an extra separate purchase. For Nanlite, it’s the focusable FL-206 Fresnel modifier for $209, offering 10-45° of coverage. On the Aputure side of things, it’s the F10 Fresnel for $219, offering 15-45° of coverage. This extra cost still doesn’t bring either light close to the cost of the Maxima 7. In fact, you could get either the 600D with all three of Aputure’s Spotlight Mount Sets and only just get in the neighbourhood of the Maxima 7’s price (and that’s the “cheap” version of the Maxima 7, the expensive one is an extra €1,000).

And you can’t even get the Maxima 7 away from plug sockets and onto battery power. It only runs on AC. So, you’re going to need to either shoot indoors, or you’re going to be taking pure sinewave generators out with you to shoot on location – and at that point, the 26dBa quiet mode probably isn’t really all that important.

I’m really quite looking forward to seeing the comparisons once these start to get into the hands of users and the inevitable YouTube videos start popping up. I’m curious to see exactly what twice the price actually gets you (besides a 10″ Fresnel) when they’re really not all that dissimilar on paper.