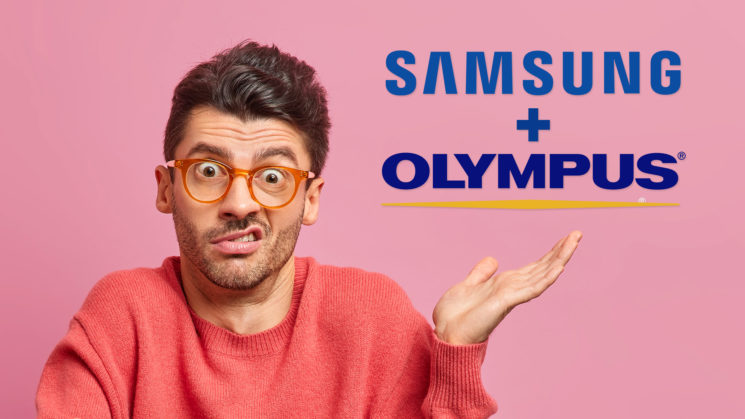 Well, if this ain’t just the weirdest thing I’ve heard this year. Apparently, Samsung is teaming up with Olympus (?!?) to collaborate on the smartphone modules for future Samsung smartphone, possibly including the Fold 3. At least, according to “tipster” heyitsyogesh on Twitter and “confirmed” by Ice Universe on Weibo.

The general idea doesn’t seem that crazy. After all, we’ve seen smartphone manufacturers team up with Leica, Hasselblad and Zeiss. But Olympus? When Olympus doesn’t technically even make cameras anymore? Responding to that query, heyitsyogesh confirmed to DIYP that it is indeed OM Digital that the collaboration is with, but that it will use Olympus branding – which sounds even stranger.

Ok this could be huge!

With the Note lineup out this year, Samsung is going big with the Fold 3.

Heard about this very briefly, Samsung might be jumping on the latest trend of partnering with a camera brand. We might see this possibly happen on a special edition Fold.

As per the info I got, both Samsung and Olympus held talks about a possible partnership. The current status and extent of this partnership is not exactly clear. They could work on a special edition Fold or we could see this happen on 'H3' (S22 Ultra)https://t.co/y4ykWKIIR7

The rumour was “confirmed” by Ice Universe via Weibo… 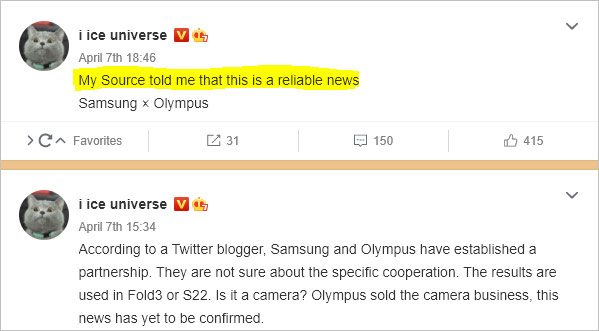 If true, it would be a very smart move for OM Digital. Getting into a big smartphone manufacturer like Samsung, especially when Samsung makes their own sensors and is rapidly taking market share away from Sony, certainly would help cement OM Digital’s future as a solid company, even if it takes them a while to get the old Olympus Micro Four Thirds system properly up and running.

Olympus almost certainly had a lot of cool as-yet-unused tech IP that would’ve been transferred to OM Digital. So, the idea of the two collaborating does at least seem plausible. But why would they go with the Olympus branding? Are they even allowed to use the Olympus branding? That’s very weird considering that OM Digital probably won’t even be using the Olympus branding anymore on newly manufactured cameras that were previously made by Olympus.

As weird and potentially unlikely a match up as this seems, it would be very cool if true and offers a lot of hope for the future of OM Digital as a company, offering some hope for the Micro Four Thirds system in turn.

« These photos of jumping squirrels with nuts will put a huge smile on your face
Samyang’s new AF 24mm F1.8 FE astrophotography lens features a “go to Infinity focus” button »