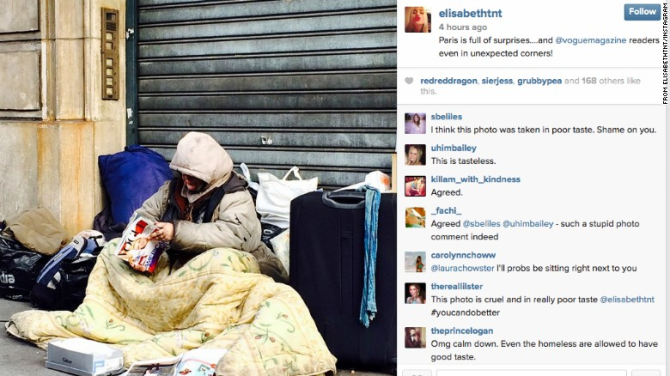 A screen grab of the photo and some of the comments before it was deleted. Source: CNN

Vogue magazine’s editor at large, Elisabeth von Thurn und Taxis, caused a stir after she posted the photo to her Instagram account, captioned “Paris is full of surprises….and @voguemagazine readers even in unexpected corners!”

The fact that she is an actual princess and belongs to one of the wealthiest families in Germany provoked even more criticism.

The princess is in Paris, where she is covering fashion week, and that’s where she spotted what appears to be a homeless person reading Vogue magazine.

Not wanting to miss the opportunity to show off how popular her magazine is, she decided to share the photo with her 14,600 followers. The responses, however, weren’t quite as she expected.

“I think this photo was taken in poor taste. Shame on you.”, “This is tasteless” and “This photo is cruel and in really poor taste” were just a few of the comments the photo received.

Elisabeth von Thurn und Taxis responded to the critics writing “Why cruel? The person to me is as dignified as anyone else!”, though the photos was deleted within just five hours of it being posted.

Some followers came to her defense but Fashionista website, which was the first to report the photo, said the photo shows “how out of touch she is”.

The website added that “…The things she writes, both in Vogue and on social media, often straddle the line between entertaining/aspirational and disturbingly out of touch. On Saturday she crossed that line”.

Obviously something feels wrong about this photo, but here’s the question: how important is the identity of the photographer when looking at a photo?

Homeless people have been featured in many photos in various places and situations. They are, and will probably remain, a popular yet controversial subject for many years to come.

Putting aside the moral and ethical controversies related to photographing the homeless, do you believe that the photographer’s identity is relevant to their ability to take certain photos?

Would you be OK with the editor posting the photo had she not been the sister of the prince of Thurns and Taxis with an estimated fortune of $1.5 billion?

What about her posting the photo if she was neither rich nor affiliated to the magazine?

clearly the photo wasn’t taken for artistic purposes, but I think it raises a few interesting questions.

What do you think about it?