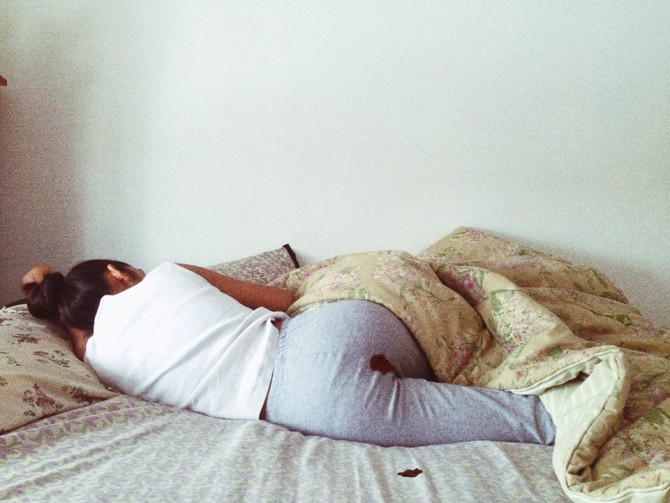 Rupi Kaur, a poetess & spoken word performer as she calls herself, was at the center of a recent social media storm after she posted a photo of woman lying in bed with period blood visible on the sheets and the woman’s pants.

The photo is part of a series created by Kaur as part of her final project for a visual rhetoric course she’s taking, aimed at demystifying the period and making it “normal” again.

Sure, this isn’t a subject you see photographed or posted online very often, but what caused the outraged responses was Instagram’s reaction to the photo. The mobile photo-sharing social network deleted the photo stating it was in violation of the community guidelines. When Kaur re-uploaded the photo, and Instagram once again deleted it, the artist lashed out against the “misogynist” decision. 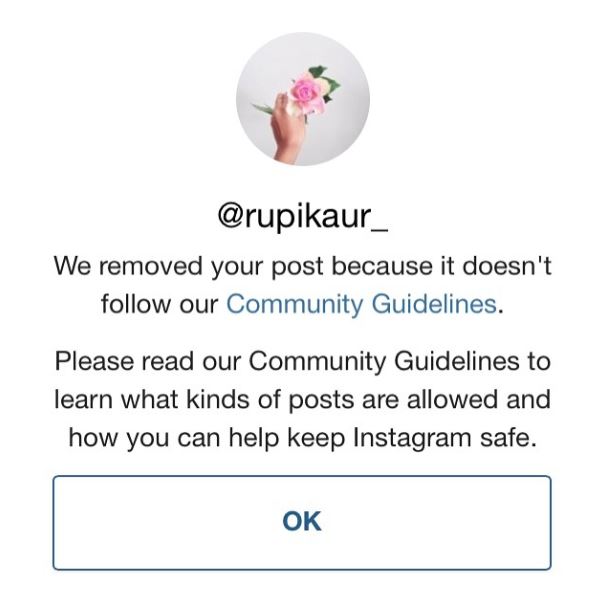 Stating that Instagram’s problematic decision is exactly the kind of behavior her work criticizes, Kaur shared the “violating” photo along with the following message on her Facebook page:

“thank you Instagram for providing me with the exact response my work was created to critique. you deleted my photo twice stating that it goes against community guidelines. i will not apologize for not feeding the ego and pride of misogynist society that will have my body in an underwear but not be okay with a small leak. when your pages are filled with countless photos/accounts where women (so many who are underage) are objectified. pornified. and treated less than human. thank you. ⠀⠀

as a part of my final project for my visual rhetoric course i created this image along with a full set which you can view at www.rupikaur.com to demystify the period and make something that is innate “normal” again cause rape categories in porn are okay. objectification and sexualization is okay. people getting off on naked underage women. bondage. torture. humiliation. abuse is okay but this makes them uncomfortable. that’s what this work is supposed to do. make you as uncomfortable as you should feel when you watch others get abused and objectified. ⠀⠀⠀⠀ ⠀
⠀⠀⠀⠀ ⠀⠀⠀⠀ ⠀
This just goes to show who is sitting behind the desk. And whose controlling the show. Whose controlling the media and who is censoring us.

Some women aren’t allowed in their religious place of worship. Out of their homes. To do certain things. And are told they are sick. As if the period is a common cold. Yes. This is here in North America. I have been hospitalized many times because of issues associated with my period. I have been suffering from a sickness related to my period. And ever since I have been working so hard to love it. Embrace it. Celebrate it. Even thought it’s given me so much pain in the past few years. and they want to tell me I should be quiet about this. That all of this we experience collectively does not need to be seen. Just felt secretly behind closed doors. That’s why this is important. Because when I first got my period my mother was sad and worried. And they want to censor all that pain. Experience. Learning. No.

Their patriarchy is leaking.

Their misogyny is leaking.

We will not be censored.
⠀⠀⠀ ⠀⠀⠀⠀ ⠀
i bleed each month to help make humankind a possibility. my womb is home to the divine. a source of life for our species. whether i choose to create or not. but very few times it is seen that way. in older civilizations this blood was considered holy. in some it still is. but a majority of people. societies. and communities shun this natural process. some are more comfortable with the pornification of women. the sexualization of women. the violence and degradation of women than this. they cannot be bothered to express their disgust about all that. but will be angered and bothered by this. we menstruate and they see it as dirty. attention seeking. sick. a burden. as if this process is less natural than breathing. as if it is not a bridge between this universe and the last. as if this process is not love. labour. life. selfless and strikingly beautiful.”

I came across this message thanks to a friend who shared it, and I knew immediately there’s a story worth sharing here. Apparently over 110,000 people on Facebook and Instagram who liked Kaur’s protest agree, in addition to the 15,000 who shared it as well.

While I’m guessing it was the enormous support Kaur received and the thousands of messages attacking Instagram that led to the decision to restore the photo, the social media claimed it was removed by mistake and sent Kaur an apology.

The message stated that the delete photo has been restored, but failed to explain how it got deleted, twice, by mistake.

Instagram’s new sensitivity filter might be censoring your work