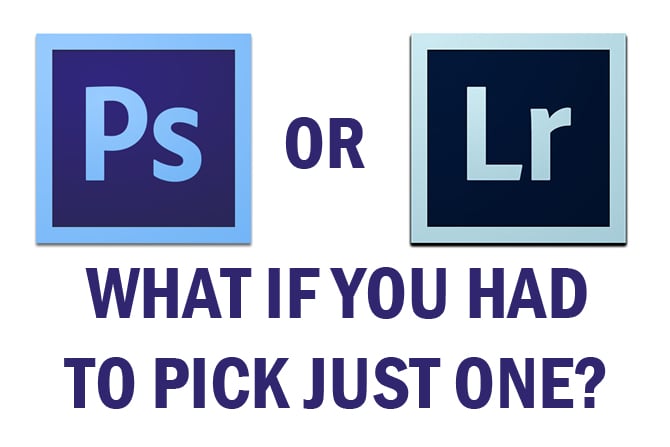 One of the questions I get a lot comes from new photographers wanting to know whether they should be working in Photoshop or Lightroom. I particularly enjoy their deer-caught-in-the-headlights look when I reply, “Both!” While it’s true that either of these incredibly powerful Adobe tools could, in theory, provide photographers with everything they need to edit their images, I really am a firm believer that a strong workflow rests on a solid foundation of both PS & LR. Having said that, though, learning just one of these applications can be a daunting task for even the most dedicated photographer. Learning two can seem insurmountable.

It’s really rather staggering when you stop to think about how much of our time is spent in front of a computer, rather than behind a camera. That being the case, you really do want to make sure that you are using your time as efficiently as possible. I touched on this a bit in an article last week regarding 10 Steps to Better Photo Workflow. I mentioned in that article that I had been reluctant for a long time to fully embrace what Lightroom has to offer. Part of the reason was that I’d gotten so good with my Photoshop workflow that taking the time to learn something new seemed to be taking up way too much of my time.

So, if you had to pick only one, which would it be? It’s not an easy question to answer. Each has its strengths and each has its weaknesses. Let’s take a look.

LAYERS- For me, this is by far the best advantage that Photoshop has over Lightroom. By applying local edits and modifications on individual layers rather than globally to the image itself, I have much more finely tuned control over every aspect of the image. Being able to add layers– and adjust how those layers interact with each other with blending modes– opens up a world of almost endless possibilities when it comes to images requiring a lot of work in post. Think about a sunset, for example. Being able to bump the contrast in the top half of the image without losing detail in the bottom half is a job made infinitely easier with layers, layer masks, and blending modes.

TONS OF TOOLS– Lightroom is a pretty robust program, but it doesn’t have anywhere near the toolbox that Photoshop has under the hood. Granted, I don’t think I’ve ever met a photographer who uses each and every tool or process that Photoshop has available, but the fact remains that these tools do offer a range of possibilities that Lightroom simply can’t.

WHAT KIND OF POSSIBILITIES?– For starters, you can create new images and graphics from scratch. This may not seem like that big a deal at first. After all, you’re using this software to work on images you’ve already taken, right? Most of the time that may be the case. But sometimes you may actually need to create the basis for a new image. Stitching panoramas or creating composite images are just two examples of this important capability.

ACTIONS– Don’t confuse actions in Photoshop with presets in Lightroom. A preset is applied globally to the entire image, creating an overall effect. An action, on the other hand, is a recorded sequence of steps, allowing you to complete complex editing tasks without reinventing the wheel every time. While there are countless options available for purchasing commercially created action sets, it’s important to remember that any photographer working in Photoshop has the ability to create their own actions of their favorite editing processes.

THE LEARNING CURVE– Photoshop’s biggest drawback used to be its price tag. Vast numbers of photographers just couldn’t afford it. That created a situation where they either relied on weaker choices, or perpetuated the pirated software epidemic. Neither of these was a very attractive option. This stumbling block has been pretty much eliminated by the new Creative Cloud subscription plans. The steep learning curve– always an issue with Photoshop– has taken over as the #1 problem for photographers jumping into the deep end of the Photoshop pool. I’ve been using Photoshop for about thirteen years, and I like to think I’m pretty good with it– at least when it comes to my own needs. It’s a bit mind-boggling, though, when I consider the fact that my Photoshop knowledge probably only touches the tip of the iceberg when it comes to the program’s full potential.

NO FILE MANAGEMENT SYSTEM– One of Photoshop’s biggest weaknesses is one of Lightroom’s biggest strengths. Since Lightroom was designed primarily with photographers in mind, its ability to manage and catalog files is one of its best selling points. Photoshop can do some pretty amazing things for your photos. Helping you keep them organized, though, is not one of them.

NO NATIVE RAW EDITING– I honestly don’t see this one as being that big of a deal, but I’ve heard some photographers complain about it so I thought I’d mention it. Lightroom lets you work on raw files straight off the camera. That’s partially because when you import an image into Lightroom you aren’t actually working directly on the image itself. In Photoshop, however, plug-ins like Adobe Camera Raw (ACR) are required for opening your image files in a way that you can do your edits. The reason I don’t see this as that big a deal is that in either scenario, we still need special software to open raw files. We always have and probably always will.

ON-BOARD RAW PROCESSING– As just mentioned, Lightroom allows for raw processing without any additional plug-ins. Also as just mentioned, I personally don’t see this one as a huge advantage, but it does create a smoother workflow. You be the judge.

MORE USER-FRIENDLY– Where figuring out a solid workflow in Photoshop can be intimidating, Lightroom seems to have been designed with a logical progression in mind. In the Develop module, for instance, simply following the order of the panels and sliders can help even the beginner get the results they want, without the steep learning curve that Photoshop requires.

FILE MANAGEMENT– I realize that it seems like I’m just flipping the Photoshop cons around to talk about Lightroom pros, but it really is more than that. The importance of a good file management system cannot be undersold. If you’ve been doing this for a long time, I’m sure you have thousands of photos in your image library. If you’re just starting out, it won’t take you long to realize there’s no way you can rely on your memory alone to keep track of all of them. The fact that Lightroom not only has such a system, but is flexible in your ability to tailor it (by date, by name, etc.) is a huge plus.

BATCH PROCESSING– Another big advantage to Lighroom is its batch processing capabilities. Photoshop also has a some batch processing, but I find Lightroom to be vastly superior in this regard. Being able to tweak and adjust a single image and apply those changes to an entire series of images with just a few clicks is the biggest time-saving innovation we’ve seen in photo editing. Anything that gets me away from the computer faster is a big selling point for me.

PHOTOS, AND NOTHING BUT PHOTOS– For most photographers this may not be such a big deal. My projects, however, often require me to create graphics from scratch– something I can only do in Photoshop (assuming my only choices are Photoshop or Lightroom). Also, don’t forget what I said earlier about composites. The time may come when you may need to create something brand new.

NO LAYERS– As noted earlier, I believe Layers to be one of the single greatest editing tools that Photoshop has to offer. I probably could switch over to an almost all Lightroom workflow for some projects if it wasn’t for this one major drawback. Being able to fine-tune adjustments to very specific areas without affecting others is too important to my process. While effects can be stacked on top of each other in Lightroom, it’s not the same as working with independent layers.

This is pretty much what it all boils down to– What do you need your software to do? If all you need is basic adjustments (tone curves, brightness, contrast, etc.), along with cropping, resizing, and minor retouching, Lightroom may be enough to suit your needs. Anything beyond that, however, is going to require Photoshop. I’m not putting this out there as a single, definitive answer. These are just my own observations, based on a lot of years of starting at images on a computer screen and trying to match what’s on the screen to what’s in my head. For me, I obviously want both. If I had to choose just one, however, it would definitely be Photoshop.

There was what seemed like a seismic shift not too long ago when Adobe switched to the Creative Cloud subscription model. The initial reaction was like an angry mob of villagers armed with torches and pitchforks. What do you mean we have to pay every month? What do you mean we no longer own our software? The list of complaints was a long one. Thankfully, Adobe listened. The result is different subscription models tailored to different needs. The current Individual Photography plan, for instance, costs only $9.99 (USD) per month. No system is absolutely perfect, but that’s a pretty tough price to beat for access to all of the most current versions of both Photoshop and Lightroom.

What about you? Which would/do you pick? Does your workflow include something other than PS or LR? Tell us in the comments.

Thanks to Tim Gilbreath of DPS for the inspiration for the post.

Lightroom & Photoshop quick tip: how to pick a color from anywhere on your computer

Pick up these eight photography tips in just two minutes