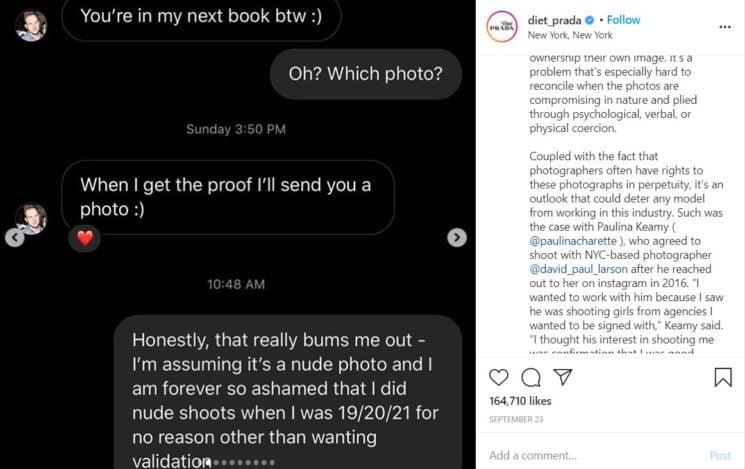 Photographer David Paul Larson recently came under fire after a chat with a model who asked him not to publish her nude photo. It’s a very tricky case, where the photographer has all the legal right to use the image. But after he ignored the model’s plea not to include her image, the community reacted fiercely.

Diet Prada shared a screenshot of the conversation between Larson and the model Paulina Keamy. They also shared the background story on their Patreon page. Diet Prada writes that Keamy agreed to shoot with Larson after he reached out to her on Instagram in 2016. “I wanted to work with him because I saw he was shooting girls from agencies I wanted to be signed with,” she reportedly said. “I thought his interest in shooting me was confirmation that I was good enough to be signed to these agencies too.”

The model described the uncomfortable moments she experienced while at the shoot. “While shooting, he would say things like, ‘what is sexy to you? Now, show me’. I didn’t know what this meant,” Diet Prada writes. “I continued to pose as I normally would and he would stop and ask me again, ‘what is sexy to you?’. I could tell he wanted me to be doing more of *something*, but I wasn’t sure what it was.”

Fast forward to 2020, Larson told Keamy that she would be featured in his next book. She wasn’t happy about it and she expressed it clearly:

“Honestly, that really bums me out – I’m assuming it’s a nude photo and I am forever so ashamed that I did nude shoots when I was 19/20/21 for no reason other than wanting validation. I know that once the photos are taken they technically belong to the photographer (a problem in itself) but it sucks that now, 3/4/5 years later as a 26 year old adult in a long term relationship working a proper job, that book with a photo of my naked body is being printed and I don’t have any consent in the matter.”

Despite Keamy’s message, Larson didn’t want to give up on publishing a photo of her along with the others. He replied:

“I understand but you did give written and verbal consent every time we worked together. It’s a huge investment of time and energy for me to not be able to use photographs years after they were shot.”

Keamy then wanted to know when contracts like this expire. He asked Larson why, “on a human level,” he would want to use old photos of girls he shot if they really don’t want him to do it.

“You shoot hundreds of girls who would probably be thrilled to have their naked bodies published in a book. Whatever – I know how this works so please at least do not include/change my name and I’ll just hope and pray that someday the mistakes I made in my late teens/early twenties eventually stop following me.”

“The model release is in perpetuity,” Larson responded. “Thank you for understanding and I will not be using any names in the book.”

Keamy was obviously misunderstood and she restated her position:

“To be clear – you do not have my understanding nor do I give you permission to use my photos and formally request here and now that you do not use them for your book or otherwise. This is MY NAKED BODY – how is this even up for debate?”

However, she didn’t hear back from the photographer anymore. Revolted by him seeing the message and not responding, she wrote:

“Cool, well it’s been hours since my last message was marked as “seen” so I’m done giving you opportunities to make the right decision here.

I feel extremely sad for my younger self and for every other girl who has collaborated with you and naively believed you would respect their decisions pertaining to THEIR OWN BODIES. this is gross. I pray your name never pops up in any other impressionable young woman’s inbox again. Bye.”

“In the last couple years, we’ve seen survivors come forward about their experiences with Bruce Weber, Mario Testino, Timur Emek, and Marcus Hyde,” Diet Prada wrote in the Instagram post you see above. All these names are on Shit Model Management’s blacklist, and Larson’s name is there as well. What all of them have in common is that models reported them to Shit Model management more than three times.

Professor Susan Scafidi of Fordham University’s Fashion Law Institute discussed the matter from a legal standpoint. She confirmed what most of us knew, and that is that the photographer is legally right. “Unless the model was underage or there’s another flaw or loophole in the release, there’s very little that the law can do,” she said. “Some state laws on rights of publicity limit what can be done with the model’s image, for example, use in an ad, but the photos can often be displayed, reused, and sold without the model’s permission or even additional compensation.” Scafidi added that the ideal solution would be to advise models never to sign away all rights in perpetuity, “but this is an area ripe for reform, she concluded.

I find this to be a very sensitive topic and it could be hard to say who’s in the right. It all depends on your standpoint.

On the one hand, Larson has indeed done nothing wrong, legally speaking. The model signed the release, these are the photos he took, and he can do whatever he wants with them. Also, I kinda understand if he doesn’t want the time and effort he spent shooting to go to waste, so to speak.

However, I still side with the model here. When I read their conversation, I thought about what I would do if I was the photographer. Well, if someone openly asked me not to use their photo and reasoned their plea, I would definitely respect their wish. Screw time and energy I spent shooting, screw the law and the perpetual model release – if my actions make someone feel uncomfortable, I won’t do it. Just like Keamy wrote, on a human level, I wouldn’t want to use someone’s photos if they were uncomfortable with it and stated it loud and clear. This is why I think that Larson should have just given it up, regardless of the legal rights he has in this case.

Whose side are you on? Who do you think is in the right here?