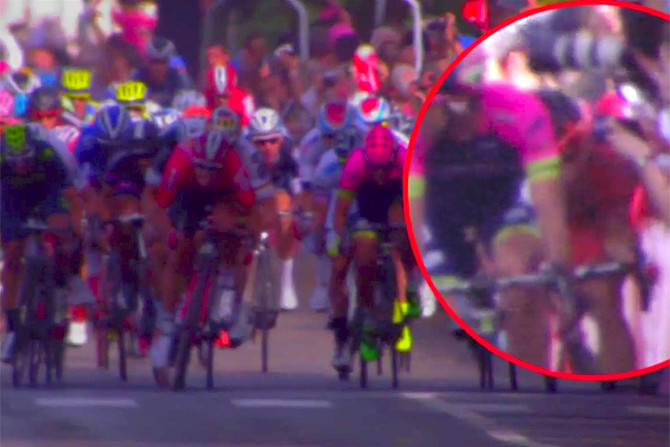 Other than being “that guy” for the rest of his life, the unnamed photographer who caused a massive crash at The Giro d’Italia (Tour of Italy) will likely face several lawsuits following Thursday’s crash during the Giro d’Italia.

Daniele Colli, the cyclist whose mangled arm made headlines worldwide, was said to file a complaint with local police on Saturday, with his team and the competition organizers filing their own suits.

Luckily for spectators, the organizers and team owners are inclined to keep the action close to the crowds and focus on educating viewers rather than distancing the racers.

“Daniele will file a criminal complaint today as the injured party,” said the manager of Colli’s Nippo-Vini Fantini team Francesco Pelosi on Saturday.

Colli, who broke his arm in two places and had to have two screws inserted during a “long and painful” surgery, was especially upset that the spectator did not reach out to apologize for the incident.

“He had his space and time to at least say sorry. I’m really sorry that he has not done so”, said Colli.

Pelosi agreed with his rider, stating that the police complaint is justified. “The fact that he hasn’t apologised aggravates the situation and demonstrates that he’s a person who isn’t worthy of being allowed to get away with it,” he said.

Other than the criminal complaint, the Nippo-Vini Fantini team reserves the right to file a civil complaint seeking compensation for the financial damage caused to the team.

As if two suits aren’t enough, Giro organizer RCS Sport said they “could eventually open a civil case for ruining the race’s image”. He did however rule out the possibility that they will file a criminal case against the fan.

Up until Saturday it seems that only the police knew the identity of the photographer, and he was said to be a local 30-year-old photography-store owner. On Saturday, however, he issued a statement via his lawyer and revealed himself as “Mark”.

In his statement, Mark apologized for what had happened and expressed his wishes that Colli recovers quickly and that Alberto Contador (who was leading the race and also crashed) will end up winning the race.

He also stated that he is being turned into a monster following the unfortunate events and that he hopes he will get an opportunity to visit Colli as soon as possible.

As expected, the crash led to calls stating the spectators should be kept further back from the action and barriers should be made higher. Luckily, unlike in Japan where one radio-active drone operator may have ruined the field for everybody, several team owners and the race organizers agree that there needs to be more education involved rather than adding more rules and regulations.

“The beauty of cycling is that it doesn’t put too much space between the public and their champions, and even if you put up two-metre barriers, people will put their hands through them to take selfies. It might be an idea to put a corridor of 80cm between two sets of barriers, a bit like at concerts, which would limit the risks. But I’d work on improving the behaviour of the public rather than on new barriers”, Pelosi Concluded.

Two teens responsible for killing photographer to be tried as adults, could be sentenced to life

« Dear Canon and Nikon, I Have Some Suggestions
Create Demon Black Eyes in Photoshop »