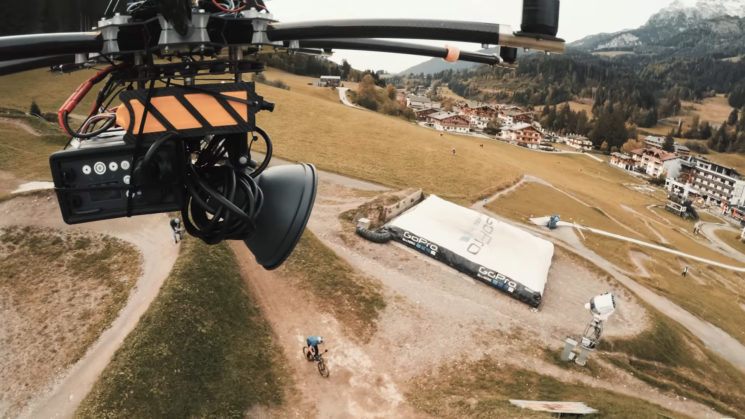 When Nikon put a couple of SB-5000 speedlights on a drone for their launch of the D500, I was pretty impressed. I was also a little jealous. It was something I’d wanted to try myself, but didn’t have access to the kind of drones I’d need to lift them. Now, photographer David Robinson has upped the stakes by strapping an Elinchrom ELB 400 strobe to an octocopter.

Such a rig has the inherent advantage of being far higher than light stands could ever go. It’s probably the most reliable method of trying to simulate bright daylight with hard edged parallel shadows. Being a drone, it also has the advantage of being able to follow a moving subject. In this case, that moving subject is pro mountain biker Matt Jones.

It’s ridiculous, really, just how far drones have come in just a few short years. The ELB 400 pack weights 1.27kg, the head weighs another 0.25kg. That’s a little over 1.5kg or almost 3.5lbs. Then there’s all the cables and other bits you need to add on top. It’s certainly not the kind of thing you’d want to try and mount to a Phantom.

1.5kg might not sound like a massive load, but when you consider the weight of the drone itself, it adds up real quick. Then there’s going to be at least two stonking great big (probably 6 cell) batteries to ensure you get enough flight time for it to be useful without crashing down to the ground before you’re ready.

Drones capable of carrying such a weight have been around for a little while though, which is what sparked the idea in David’s head. About two and a half years ago, he had been introduced to an octocopter drone during a tour of Red Bull’s equipment pool. This drone was designed to carry large cameras such as the RED Scarlet.

David talks more about the experience on the Elinchrom website. Learning such a drone existed immediately started thoughts in his head. Not being a filmmaker himself, David’s idea was to use it to get light into places that would otherwise be virtually impossible. Being a biker himself, he also immediately knew what subject he wanted to shoot with it.

Being able to light a biker at the peak of their jump from above isn’t something that most photographers have the ability to do. Short of building large towers onto which you can mount them, a drone is pretty much the only way. Whether at night or during the day, it certainly works to great effect.

With a traditional monolight, such a setup would’ve been extremely difficult, if not impossible. Monolight strobes are much heavier than the heads from a separate head & pack system for a start. This might sound like an unfair comparison, but when you consider they’d probably need to also mount an external battery pack for a monolight anyway, it kind of even things up a bit.

Of course, he could go with something like the Profoto Air B1 or Godox AD600BM, but it’s still a lot of weight to have to angle down towards your subject. The weight distribution just wouldn’t be balanced enough.

The separate head and pack system of the ELB 400 allowed them to balance and mount the battery pack securely to the underside of the drone. With a flash head weighing a mere 250g, it can be rotated perfectly to point at the subject from the air without throwing the whole rig off balance. It was essentially the perfect flash for such an idea. 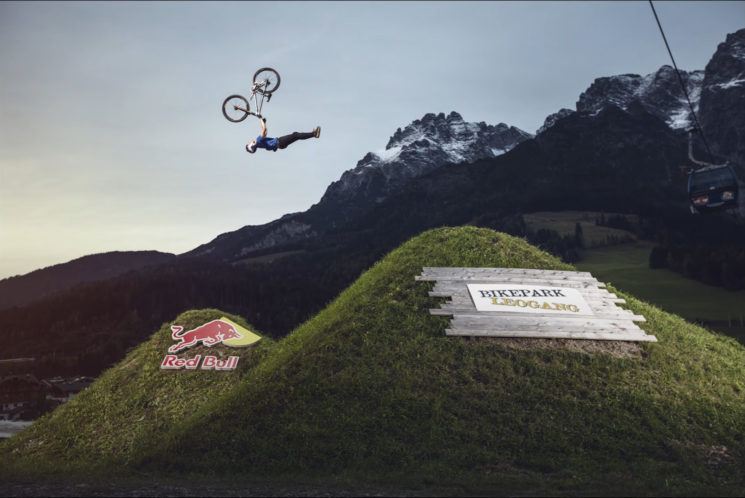 With Nikon, Canon and now Elinchrom throwing flashes onto drones, I can see this definitely becoming a thing amongst photographers. With drones getting far smarter and more capable every few months, it probably won’t be long before we start seeing such shots regularly. It might even be allowed in Sweden, if you don’t need a camera to see where your flash is pointing.

You can read David’s full behind the scenes on the shoot over on the Elinchrom website.

What do you think of David’s results? Has putting flashes on drones something you’ve wanted to do yourself? Have you also done it? Let us know, and if you have shot some, show of some of your drone-lit shots in the comments.