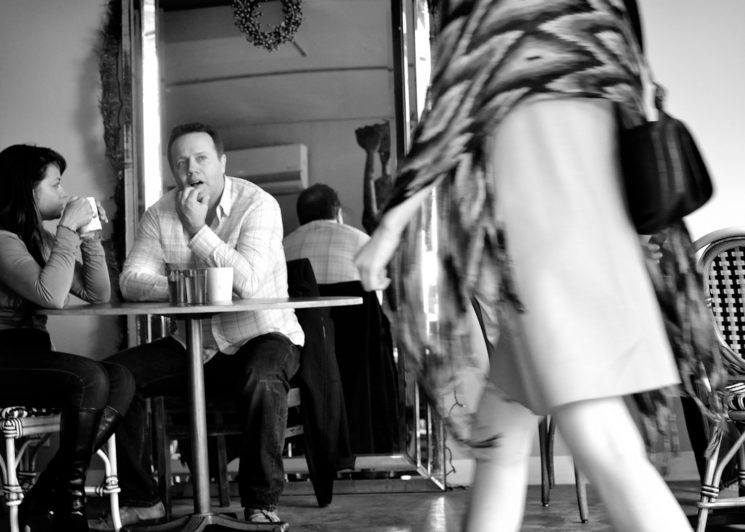 I feel that there’s a word missing from our vocabulary, and this essay is the culmination of an effort to find such a word, to define it usefully, and to work through some of what it might mean. 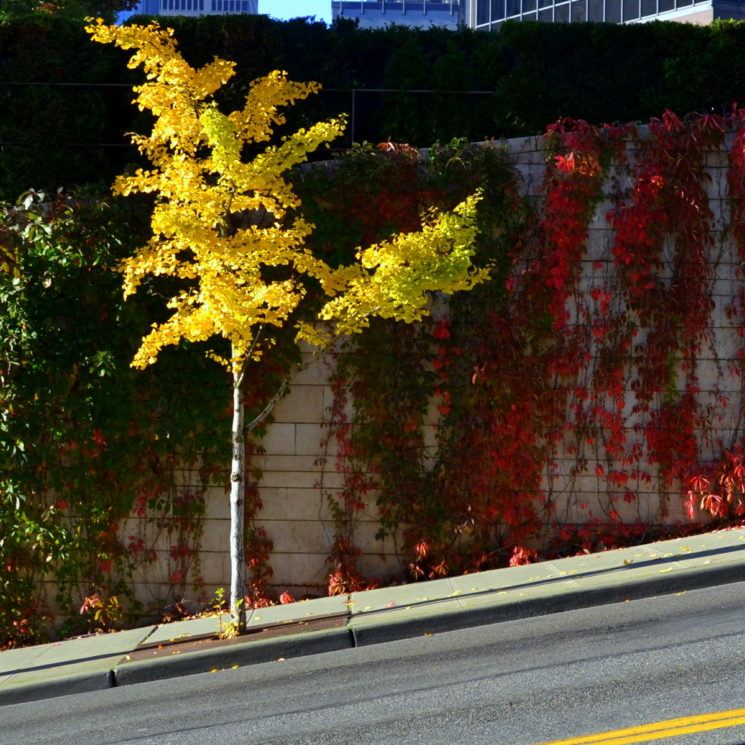 The first one I shot specifically to test a camera-clubby sort of online forum’s reactions. As predicted, they liked it pretty well (of course there were quibbles). I hate it. It is a stupid picture which, as presented here at any rate, signifies nothing. It “says” nothing about anything, it evokes nothing. There’s no story, there’s no context, there’s no particular feelings it might generate. It’s just a sort of vaguely pretty picture with some strong compositional elements.

The second one is the only successful street photograph I have ever shot. It is rife with “story”, it says something about something. About how men look at women. About relationships. About social dynamics. The picture unpacks into an infinitude of possible stories. Is that the man’s wife or girlfriend? Is she about to say something sharp? Will she keep it to herself and dump him in a year? You might not speculate about a narrative at all, and merely recall that this happens in coffee shops when a pretty girl walks in. The men turn and look. You might feel a frisson of revulsion, or familiarity, or pleasure, depending on who you are. And so on. Nobody’s going to get all those things out of the picture, but they’re all possible.

What separates these pictures? (setting aside all technical details)

One of them has a “story” and the other does not. But let us not get bogged down in stories. When we say “story” we immediately start thinking about things we can write down in words, and that’s not what the visual arts are about. If one could write it down in words, then perhaps one should be writing, not snapping.

No, visual arts are broader than that, they can evoke feelings, emotion, more general non-narrative, non-linear associations. Photographs are, essentially, a representation of what was in front of the lens and therefore there is a default connection with the real world. A photograph at any rate begins as a little slice of the real world, a window, a moment, and is intimately bound up with that real world.

Photographs, by their nature, lean heavily on all that stuff outside the frame, that world real or imagined, into which the picture fits, out of which the picture has been taken, and which, we imagine, the picture tells us something about. There’s a reason photojournalism is a lot more prevalent than paintingjournalism.

So now I’ll introduce the concept:

You could call this “backstory” or “semiotics” or whatever, but none of those words seem to quite fit. Some of them are close, but are either too broad, too narrow, or just not quite the right meaning.

Therefore, this somewhat vague, somewhat subjective, mass of stuff is what I am calling trame. La trame is a French word, often translated as “the frame”, but which literally means the weft of fabric. This is the thread or yarn of a fabric that is repeatedly passed back and forth, over and under the warp threads, in weaving. It’s a continuous thread or yarn that is half of the fabric. I think of the standard “frame” translation not as the frame of a photograph, but as the structural frame, say, of a building.

In addition, trame means almost exactly what we want in French cinema, where it refers to all the curated details that add depth, texture, life to the film.

One of the advantages of borrowing a word from another language is that you can shade the meaning in the borrowing, to more exactly fit your need. I propose to borrow the word for photography, and to use it to mean just what I said above. All that material that isn’t necessarily in the frame, but which is evoked, implied, imagined to surround and support the picture, or the pictures. The story, the backstory, the emotional content.

Like this picture, which is a boring picture of a flower with, inexplicably, a wedding ring resting beside it. If you work at it a little, I dare say you can feel at least some trame here. 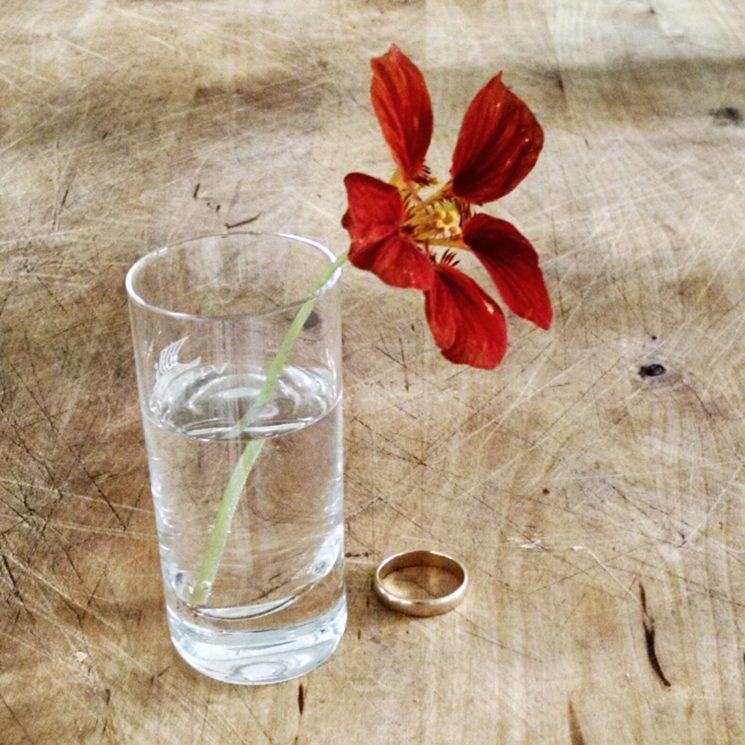 So what can we say about trame?

Snapshots, vernacular photographs, generally have a lot of trame, drawn as they are from a real life, in real time, as that life is lived. The moment may be superficial, a boy holds his cat, a latte is served. Still, it is an authentic moment in a genuine life filled with all the detail and richness of life. The picture itself may not be much of anything, but the stuff outside the frame, the stuff we can imagine, well it’s the whole world, isn’t it? That’s trame.

Here are a couple very real moments from my family’s life. To me they have a lot of meaning. You can probably feel a second-order effect, even though you don’t know these people you likely feel that these are real moments from real lives, real people with stories. 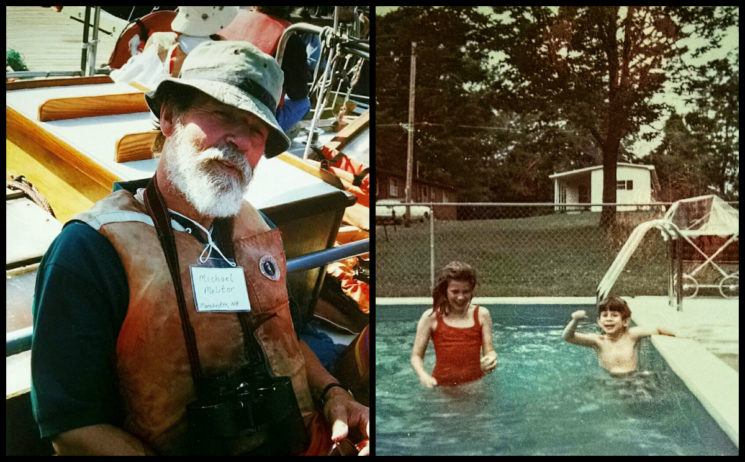 A really good portrait evokes the feeling that you know this person. You feel an emotional connection to the subject, you imagine that you understand them in some way. That’s trame. A poor portrait doesn’t do that.

What if I entitled the stupid Tree photo I started out with instead “Out Grandmother’s Window”? We can visualize the grandmotherly figure looking out her window at the tree, perhaps with pleasure?

Consider this series. The first photograph, in particular, is a nothing picture (also out of focus, sorry). Put it in a series and there’s something there, maybe. You can imagine the idea of time passing, of mortality. Entitle the series “Leukemia”, or “Grandma”, or “America” and you get more trame, three quite different sets of ideas come more or less popping out. Again, it is the combination of pictures and title that do it. Without the photos the word “Grandma” evokes a lot of things, but not this.

So captions and titles matter, but also how you group your pictures. A picture of nothing can acquire meaning when grouped with others.

A caption can also remove trame from an otherwise interesting picture, by being too literal. While it is very chic to title things in a literal fashion, imagine re-titling “Migrant Mother” simply as “Woman with Children”. That combination of title+picture is much weaker. If the title closes the picture up, forcing it to exist only inside itself, it takes away the power of that externality, of that connection to the world and the imagination. 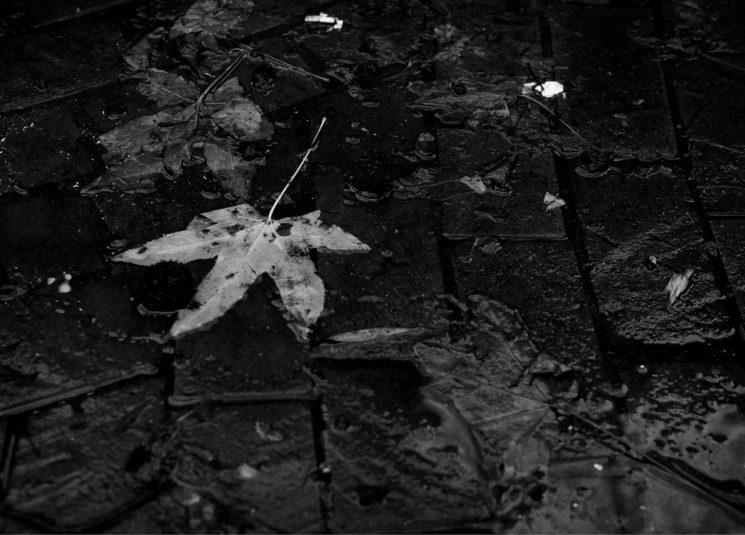 “Leaf” gives us nowhere to go. Yep, that’s a leaf. The date and place open things up to a larger trame. “Death” is arty bollocks but gives us something more to think about. In fact, this picture was shot specifically as part of a larger collection about Vancouver, and it is untitled. It relies on the larger collection working together to give a sense of Vancouver as I see that city.

Is trame purely subjective? No, I don’t think it is, not entirely. If I see something in a photo, there’s a pretty good chance you’ll see something too. Maybe not quite the same thing, but something. Sure, there will be misses where nobody except me sees a darn thing. But mostly, broadly, you’ll find that people will agree that there’s something there. It’s a lot like Art, and not by accident.

I submit, in closing, that trame matters more than almost anything else. Composition is, at best, a tool which could be used to create tramesomehow, perhaps by emphasizing the right bits of the picture. Without that emotional connection, that narrative drive, that something-outside-the-frame the picture is just an empty exercise.

I submit further, that a great deal of the Serious Photography being made today lacks trame almost entirely, being focused on compositional technique, on technical details, on copying and improving other ultimately dead, empty, photographs. Sir or madam, your landscape, nude, abstract, is lovely. But what does it say? Why should I like it more than the millions of other similar pictures? While pretty, it is dead, it excites my mind not at all.

Although I do wonder what lens you used…

Andrew Molitor is a self-described “cranky old bastard who has been taking crappy pictures for 20 years or so” based in Bellingham, Washington. You can find more of his writings and photographs on his blog. This article was also published here and shared with permission.

The Canon 5D Mark IV Will Be Very Controversial If These Specs Are True. 4K Included.