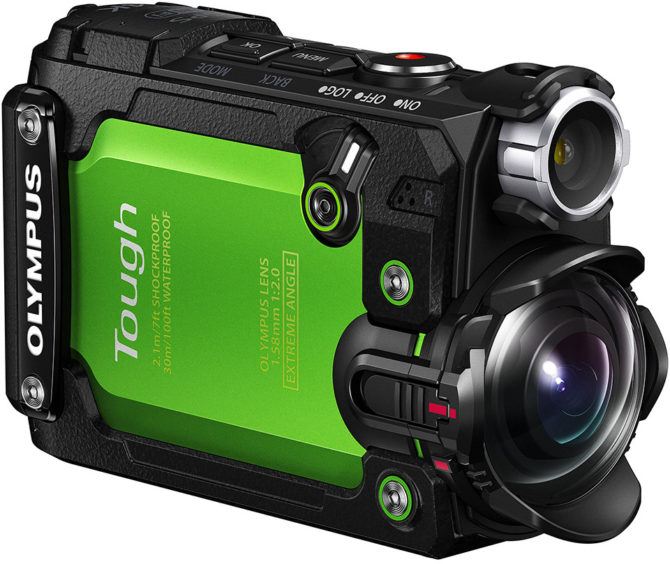 The Olympus Stylus Tough TG-Tracker (we’ll just call it TG-Tracker), is the newly announced action camera from Olympus looking to take on the likes of GoPro for market supremacy.

Boasting a whole host of neat features and super rugged durability right out of the box and without the need for a protective case, it looks like it may well hit its mark, too.

It has a look that resembles something more like a small Handycam than your typical lens-on-the-big-face camera design, the TG-Tracker has its lens on a thin end face.  This should help to hold it a little more stable when faced into the wind or travelling at speed.  It’s an intriguing appearance. 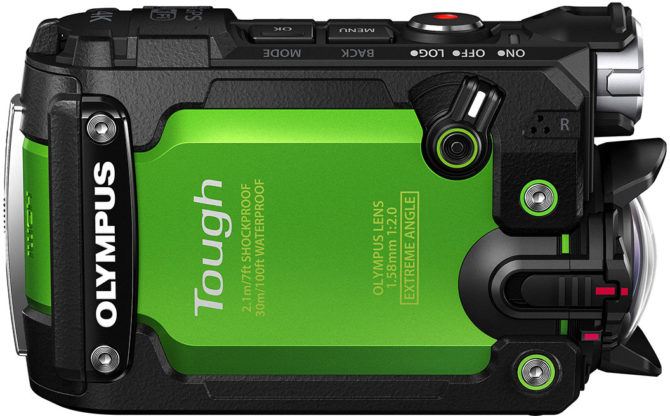 I’ve been thinking about picking up an action cam for a while now, but whenever I’m ready to buy, new ones have been released, and a whole new round of “wait and see” begins.  If I were in a huge rush, I’d have just gotten a GoPro and been done with it, but it’s not a major want, so I’m happy to wait. 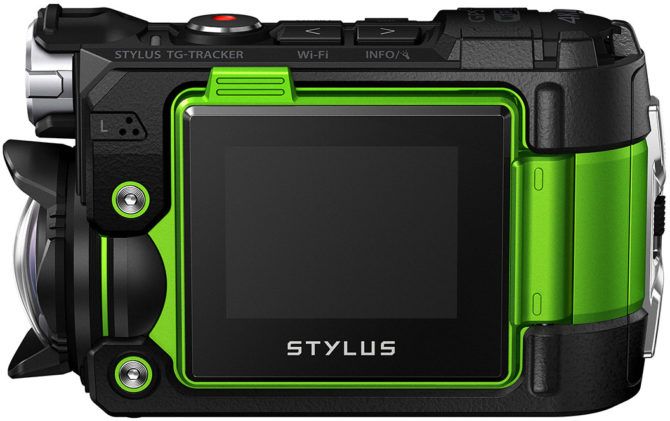 Top of my list is waterproofing, and the TG-Tracker is waterproof to a distance of 100ft, a little short of the GoPro Hero 4’s 131 feet with the waterproof housing.  The TG-Tracker, however, manages to do this without an external protective housing (although it does require a lens protector to allow autofocusing underwater – which is included in the kit), giving you access to all of the buttons and features while you’re in the water, which is a big bonus for me.

Obviously as an action camera it also needs to be able to take a bit of a beating, so the TG-Tracker is dustproof, shockproof from 7ft, freezeproof all the way down to 14°F (-10°C) and crushproof up to 220 pounds of force, without any form of protective case, so it sounds like it can handle most anything thrown at it.

On the front with have an f/2.0 lens with a 13mm equivalent focal length, offering a 204° field of view, which is greater than that of the typical human field of vision which is around 135°.

A headlight mounted directly above the lens is a nice feature, helping to light the way when shooting in dark conditions.  I could see this becoming handy underwater where visibility can often be limited.  The light can also be activated independently of the camera acting as a simple flashlight to guide your way. 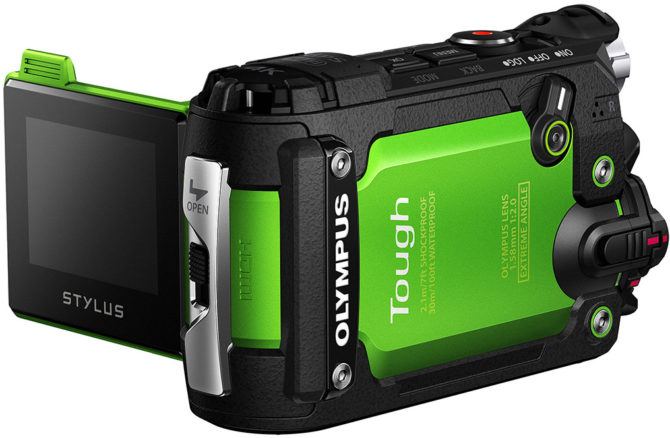 A flip out 1.5″ LCD lets you see what your camera’s lens sees when either handholding the camera or mounted to something in front of you, although it doesn’t rotate, so I wouldn’t rely on shooting selfie videos with it. 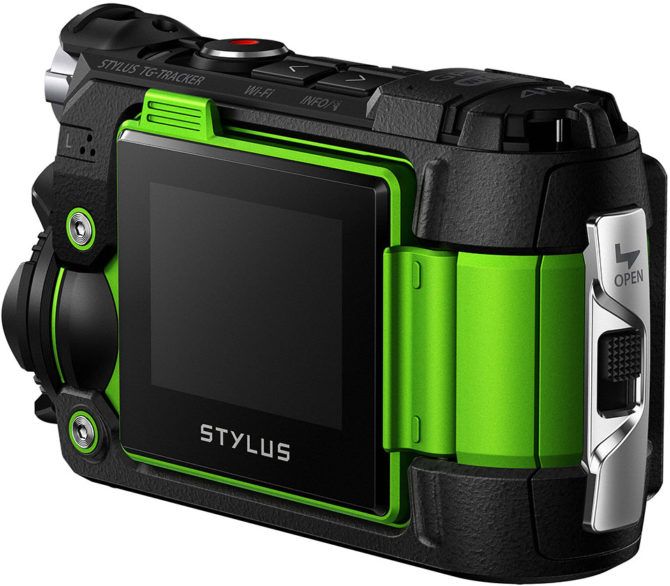 It has a few interesting features that I hadn’t expected to see in an action camera, although they certainly make sense.  Thinking about it, with a name like “Tracker”, it should’ve been obvious, really.

Having built in GPS, barometric pressure sensor, temperature sensor, compass and accelerometer, a dedicated “Log Mode” allows the TG-Tracker to record this data for an extended period of time without having to drain the battery by powering the camera.

While I’m sure many action camera users are thinking of long bike rides over the vast countryside or hiking through the mountains, for me, this makes it a perfect device for location scouting, and it frees up my phone’s processing power and battery life if I have another device that can log everything.

Speaking of the phone, built in WiFi lets the camera talk to your phone to transfer images or log data, with a whole bunch of handy summaries and other useless bits of information.  Ok, so they’d only be useless to me, and I imagine quite a few might want to know things like average speed, elevation, etc.

The only thing you don’t seem to be able to transfer over the WiFi is 4K footage, although 1080p and 720p will apparently send over just fine.

A pistol style grip is bundled with the camera for those times when you don’t have it mounted to your head, or handlebars, and will bend into a few different configurations for high or low angle shooting and selfies, but remember to not try and rotate that LCD around. 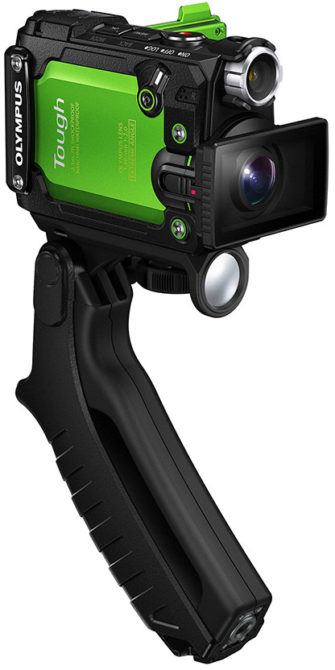 The pistol grip handle should help to make handheld shots a lot smoother and steadier, although it appears comically huge when compared to the size of this small camera, which measures only 93.2mm long, 35mm wide, and 56.5mm tall (which is about the size of three iPhone 4s sandwiched together).

All in all, it seems like a pretty formidable little camera, at least on paper, and if the durability comes even close to that advertised then it should be able to stand up to a fair amount of shooting situations and abuse. 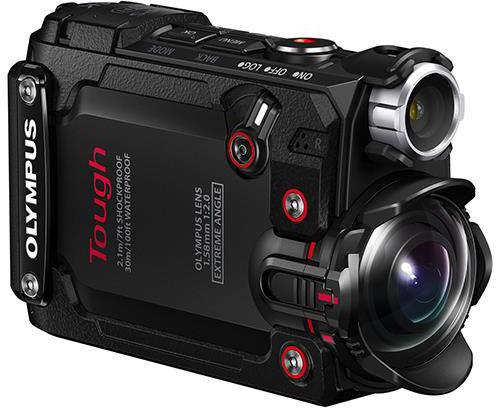 Having an estimated price of $349.99 in the USA, $479.99 in Canada and £279 in the UK, the Olympus Stylus Tough TG-Tracker is set to be released in June and is available in a rather fetching green colour, or plain and simple black.

With a price that’s pretty similar to the GoPro Hero4 Silver, the main features are somewhat comparable, although I wonder if the tracking & logging features might attract those who aren’t bothered about the slightly lower resolution stills camera.  Being honest, that last qualifier would include me.  I certainly wouldn’t be buying an action camera for its stills capabilities.

Is the TG-Tracker getting your adrenaline pumping?  Or has Olympus turned up to the party too late with too little?  Let us know what you think in the comments.

« DSLR owners have an easy life today compared to this 35mm digital hybrid from 1994
23 tips to turn you into a street photography ninja! »