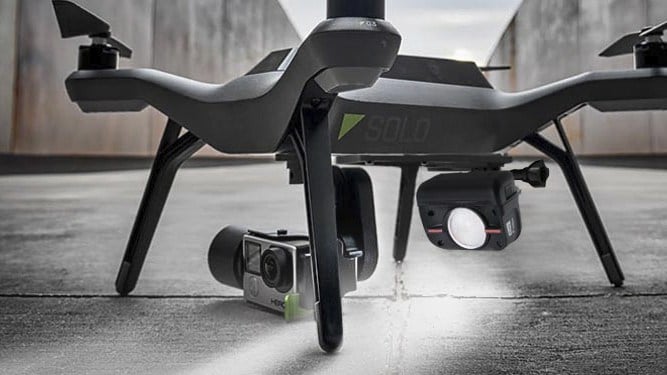 Mounting lights onto drones seems to be getting popular, all of a sudden, but I suppose it was inevitable.  Today, Fiilex announce their new AL250 light, specifically designed for mounting onto drones, allowing you to put continuous light where may have previously been impossible.

Having a continuous light attached to a drone while filming video also allows you to move your light to follow the action.

Having been used to paint light on landscapes in Reuben Wu’s latest project, Lux Noctis, this behind the scenes video shows just how versatile the option of having a light on a drone, even for stills photography, can be.

The light was also used for the Fiilex short film, Night Thief, produced for CES2016.

Other than the flashlight held by the main actor, Fiilex say that the entire thing was lit using AL250 drone-mounted lights, including the rooftop helicopter chase scene.

The Fiilex AL250 attaches to drones via a GoPro mount, so it can be easily swapped out in existing systems.  It contains an LED which draws 30W and outputs the equivalent amount of light to a 200W Tungsten, with built in Fresnel optics, powered by a replaceable and rechargeable Lithium-Ion battery which lasts for up to 25 minutes.

It also has quite an impressive CRI, which helps to ensure your colours are as accurate as possible.

Weighing in at 270g, it does come in significantly more than the GoPro it would be replacing (Hero4 Black clocks in at 88g), but it’s still not an unreasonable amount of weight, although it does get quite close to the payload limits of something like the DJI Phantom 3 Pro.  So, choose your drone with care.

You can find out more about the AL250 on the Fiilex website.

Lighting up your scene with drones, using either continuous or flash, for video or stills, is an idea that’s intrigued me for a while now.

Let’s hope that this is just the beginning of a beautifully lit new world.

« Come and sit on the world’s first “Selfie Bench”
The C-PAN camera guide arm is a jib, slider and curve all rolled into one »