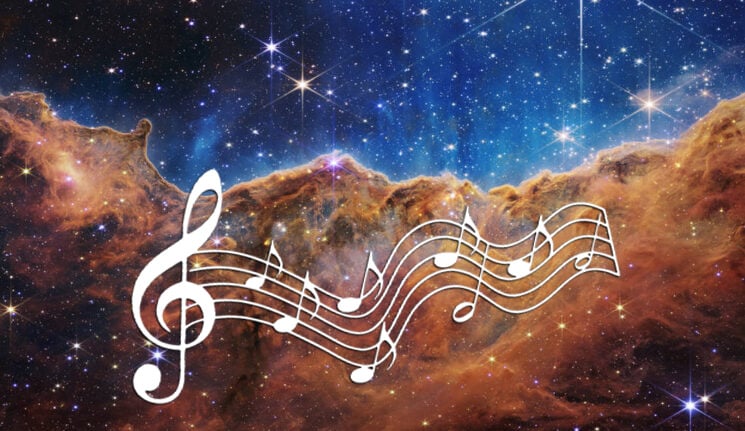 Back in July, James Webb Space Telescope’s first photos were released. And so far, we all know that they look absolutely stunning. But how do they sound? Yes, pictures can have a sound, and it’s all thanks to sonification. NASA turned Webb’s first photos into music, and here’s what it sounds when pictures “sing” to you.

Webb observed the atmospheric characteristics of the hot gas giant exoplanet WASP-96 b. When it’s turned into sound, it reminds me of something you’d hear in Star Wars prequels.

Let’s move on to the Southern Ring Nebula. This is so spooky that I’ll probably have nightmares if I listen to it before bed:

Finally, the image of the Cosmic Cliffs in the Carina Nebula sounds more like something I’d like to listen to before bed. There are three of them: sonifying the sky, the “mountains,” and the stars. Too bad they’re so short, though, but play them on repeat and you’ve got yourself a beautiful space lullaby:

How do they do this, you may wonder? As I mentioned, NASA uses sonification, a process of translating data into sound. “The translation begins on the left side of the image and moves to the right,” NASA writes in a post, “with the sounds representing the position and brightness of the sources.”

“The light of objects located towards the top of the image are heard as higher pitches while the intensity of the light controls the volume. Stars and compact sources are converted to individual notes while extended clouds of gas and dust produce an evolving drone. The crescendo happens when we reach the bright region to the lower right of the image. This is where the 4-million-solar-mass supermassive black hole at the center of the Galaxy, known as Sagittarius A* (A-star), resides, and where the clouds of gas and dust are the brightest.”

If you’d like to check out the whole playlist, you’ll find it here.

NASA turns space photos into music, and they sound as amazing as they look

James Webb’s first batch of photos is out, and they will blow your mind