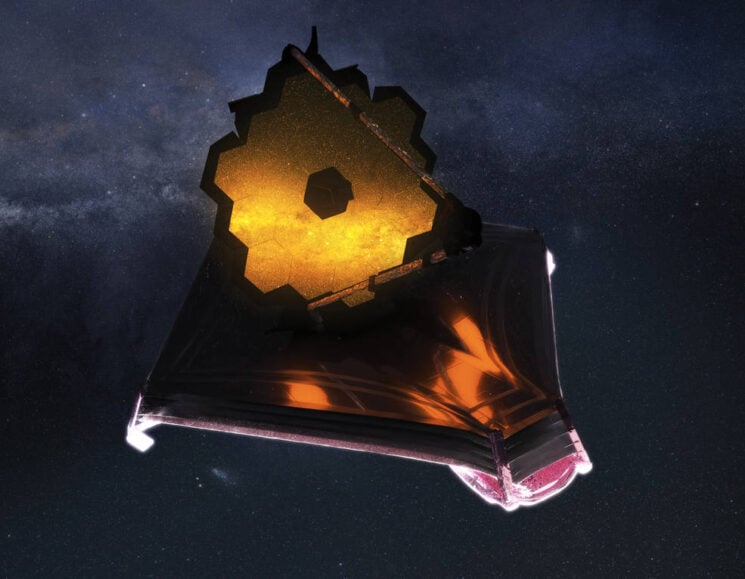 “Are you ready, are you ready for this? Are you hanging on the edge of your seat?” After the sneak peek into James Webb Telescope’s abilities and its very first photo, NASA has more jaw-dropping content to share.

The first batch of Webb’s images has finally been unveiled, and I must admit that I’ve been at the edge of my seat ever since the test photo was published. It was well worth the wait – the newly released photos are absolutely mind-blowing and I’m sure you’ll share my opinion.

NASA revealed the photos in a live TV broadcast today after US President Joe Biden unveiled Webb’s First Deep Field the day before. A number of NASA, ESA, and CSA scientists spoke to the public, sharing some details about the telescope and its mission. President of the Canadian Space Agency Lisa Campbell noted that Webb will explore the most distant galaxies, but also aid an in-depth analysis of the most prominent exoplanets.

Due to its infrared vision, Webb will be able to pierce through dust clouds and see further than any telescope has ever seen. What I find incredibly mind-blowing is that the images it can take show the universe as it was 13 billion years ago. In the future, Webb will capture the universe from up to 13.5 billion years ago. I know, all those numbers sound abstract. But here’s something for comparison: The Big Bang happened 13.8 billion years ago. So, Webb’s view goes as close as it gets to the beginning of our universe. I’m not sure I can even wrap my mind around it!

What’s pretty amazing about JWST is the speed at which it can extract data. As explained in the live stream, the previous record holder for deep field space images belonged to Hubble. It took ten days for the telescope to take its photos. But with Webb – Astrophysicist Jane Rigby says they took the first deep field photo “before breakfast.” In fact, all five images from the first batch were taken within just five days. Just imagine the discoveries that are still ahead of us. In the words of Carl Sagan, “somewhere, something incredible is waiting to be known.” 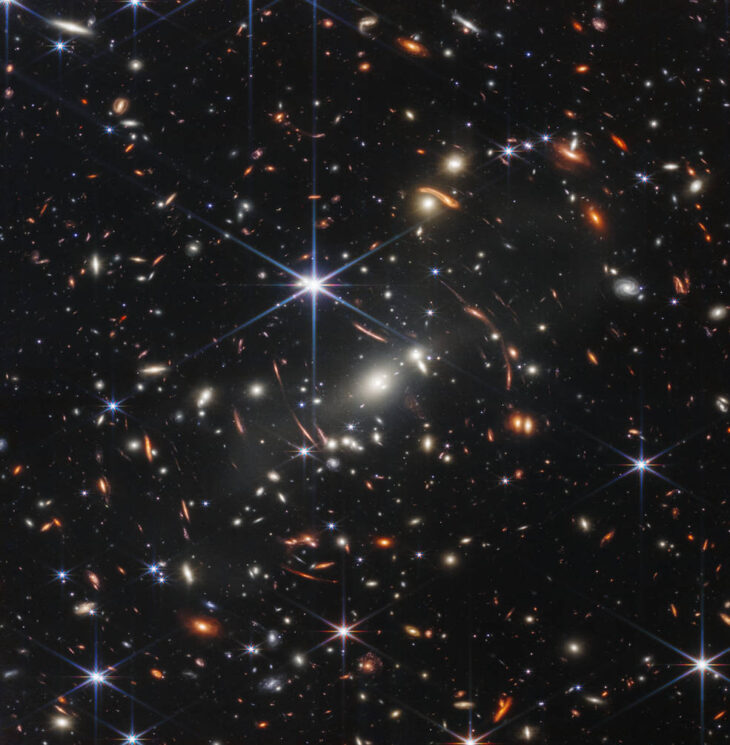 NASA’s James Webb Space Telescope has produced the deepest and sharpest infrared image of the distant universe to date. Known as Webb’s First Deep Field, this image of galaxy cluster SMACS 0723 is overflowing with detail.
Thousands of galaxies – including the faintest objects ever observed in the infrared – have appeared in Webb’s view for the first time. This slice of the vast universe covers a patch of sky approximately the size of a grain of sand held at arm’s length by someone on the ground. Credits: NASA, ESA, CSA, and STScI

I won’t keep you on the edge of your seats any longer. Behold the very first collection of photos taken with the James Webb Space Telescope! 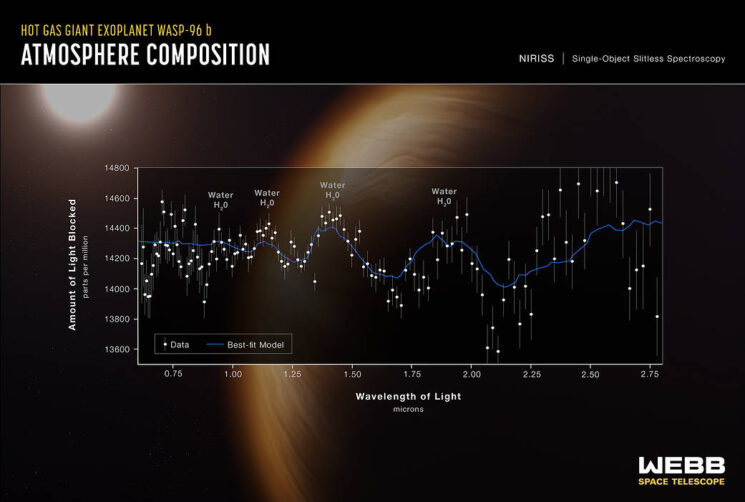 NASA’s James Webb Space Telescope has captured the distinct signature of water, along with evidence for clouds and haze, in the atmosphere surrounding a hot, puffy gas giant planet orbiting a distant Sun-like star.
The observation, which reveals the presence of specific gas molecules based on tiny decreases in the brightness of precise colors of light, is the most detailed of its kind to date, demonstrating Webb’s unprecedented ability to analyze atmospheres hundreds of light-years away.
While the Hubble Space Telescope has analyzed numerous exoplanet atmospheres over the past two decades, capturing the first clear detection of water in 2013, Webb’s immediate and more detailed observation marks a giant leap forward in the quest to characterize potentially habitable planets beyond Earth. Credits: NASA, ESA, CSA, and STScI

The dimmer star at the center of this scene has been sending out rings of gas and dust for thousands of years in all directions, and NASA’s James Webb Space Telescope has revealed for the first time that this star is cloaked in dust.
Two cameras aboard Webb captured the latest image of this planetary nebula, cataloged as NGC 3132, and known informally as the Southern Ring Nebula. It is approximately 2,500 light-years away.
Webb will allow astronomers to dig into many more specifics about planetary nebulae like this one – clouds of gas and dust expelled by dying stars. Understanding which molecules are present, and where they lie throughout the shells of gas and dust will help researchers refine their knowledge of these objects. Image credit: NASA, ESA, CSA, and STScI

For comparison, check out the same subject shot in 1998 by Hubble:

Bonus: Check out the Southern Ring Nebula as captured by @NASAHubble in 1998! pic.twitter.com/89y0hx5sUQ 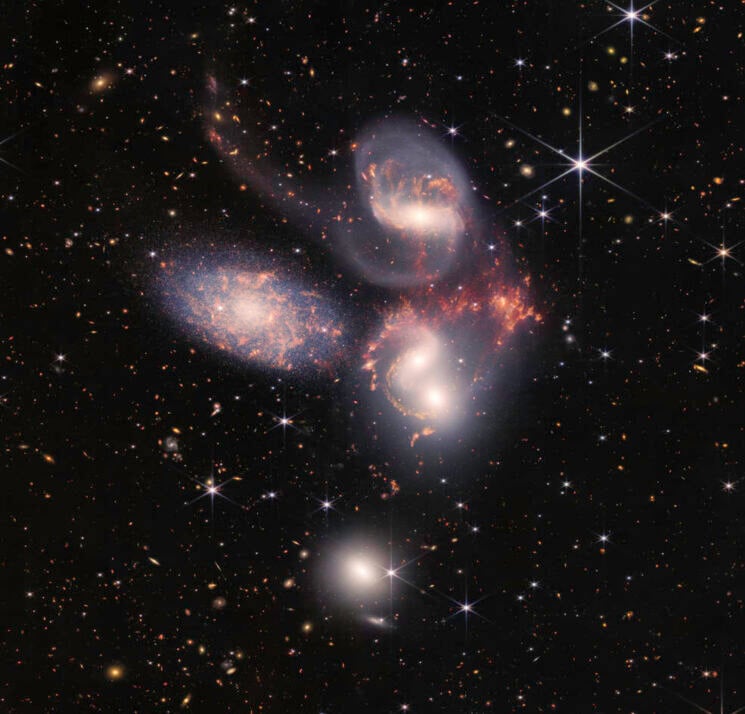 Stephan’s Quintet, a visual grouping of five galaxies, is best known for being prominently featured in the holiday classic film, “It’s a Wonderful Life.” Today, NASA’s James Webb Space Telescope reveals Stephan’s Quintet in a new light. This enormous mosaic is Webb’s largest image to date, covering about one-fifth of the Moon’s diameter. It contains over 150 million pixels and is constructed from almost 1,000 separate image files. The information from Webb provides new insights into how galactic interactions may have driven galaxy evolution in the early universe.
With its powerful, infrared vision and extremely high spatial resolution, Webb shows never-before-seen details in this galaxy group. Sparkling clusters of millions of young stars and starburst regions of fresh star birth grace the image. Sweeping tails of gas, dust and stars are being pulled from several of the galaxies due to gravitational interactions. Most dramatically, Webb captures huge shock waves as one of the galaxies, NGC 7318B, smashes through the cluster. Image credit: NASA, ESA, CSA, and STScI

Galaxies collide in Stephan’s Quintet, pulling and stretching each other in a gravitational dance. In the mid-infrared view here, see how Webb pierces through dust, giving new insight into how interactions like these may have driven galaxy evolution in the early universe. pic.twitter.com/3P15LMCCOH 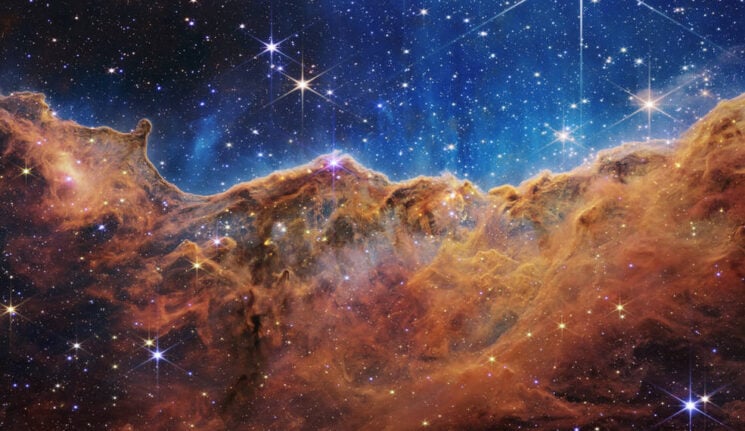 This landscape of “mountains” and “valleys” speckled with glittering stars is actually the edge of a nearby, young, star-forming region called NGC 3324 in the Carina Nebula. Captured in infrared light by NASA’s new James Webb Space Telescope, this image reveals for the first time previously invisible areas of star birth.
Called the Cosmic Cliffs, Webb’s seemingly three-dimensional picture looks like craggy mountains on a moonlit evening. In reality, it is the edge of the giant, gaseous cavity within NGC 3324, and the tallest “peaks” in this image are about 7 light-years high. The cavernous area has been carved from the nebula by the intense ultraviolet radiation and stellar winds from extremely massive, hot, young stars located in the center of the bubble, above the area shown in this image. Credits: NASA, ESA, CSA, and STScI

Here is a detail from the “Cosmic Cliffs,” one of many intriguing bits of this magnificent image, but taken with Hubble:

The “Cosmic Cliffs” build on the legacy of Hubble’s imagery of the Carina Nebula, seen here. Webb’s new view gives us a rare peek into stars in their earliest, rapid stages of formation. For an individual star, this period only lasts about 50,000 to 100,000 years. pic.twitter.com/JXklJyuab9