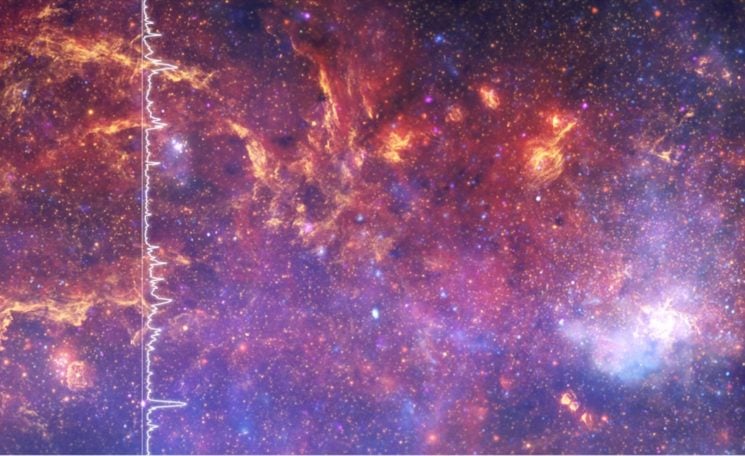 We have all seen space images, and if you ask me, they’re all awe-inspiring. But have you ever wondered what these photos would sound like? In its recent project, NASA has created a synesthetic experience by giving sound to astronomical images. And they sound just as astonishing as they look!

NASA used sonification to turn photos into music, which is a process that translates data into sound. So, instead of just staring in awe into photos of the Milky Way, you can now listen to them too. “The translation begins on the left side of the image and moves to the right, with the sounds representing the position and brightness of the sources,” NASA explains.

“The light of objects located towards the top of the image are heard as higher pitches while the intensity of the light controls the volume. Stars and compact sources are converted to individual notes while extended clouds of gas and dust produce an evolving drone. The crescendo happens when we reach the bright region to the lower right of the image. This is where the 4-million-solar-mass supermassive black hole at the center of the Galaxy, known as Sagittarius A* (A-star), resides, and where the clouds of gas and dust are the brightest.”

NASA explains further that there are two ways to listen to the sonified data. There are “solos” from NASA’s Chandra X-ray Observatory, Hubble Space Telescope, and Spitzer Space Telescope, or an “ensemble” in which each telescope plays a different instrument.

Stars and compact sources are converted to individual notes while extended clouds of gas and dust produce an evolving drone. The crescendo happens when we reach the bright region to the lower right- the 4-million-solar-mass supermassive black hole. @chandraxray X-ray solo: pic.twitter.com/4b8ORydsAK

The video above shows the Galactic Center of the Milky Way. Honestly, I almost cried when I listened to it, and I wish it were longer. If you’ve listened to it and you share my impressions, I’ve got some good news: there are a few more sonified versions of photos. Here’s what the remains of a supernova called Cassiopeia A sound like:

In Cas A, sounds are mapped to 4 elements found in the debris from the exploded star + other high-energy data. Silicon (red), sulfur (yellow), calcium (green) & iron (purple) are revealed moving outward from the center of the remnant starting from the location of the neutron star pic.twitter.com/2px4gFpghx

And if you’ve ever wondered what the iconic “Pillars of Creation” sounded like, this is the answer.

In Pillars of Creation, sounds are generated moving horizontally across the image from left to right in optical & X-ray light. Particular attention is paid to the structure of the pillars which can be heard as sweeps from low to high pitches & back. pic.twitter.com/fNZXltxBBk

“Whether it comes from vocal chords in our throats or the surface of the Sun, sound plays a valuable role in our understanding of the world and cosmos around us,” NASA writes. For us “regular folks,” these sonified images are a chance to hear something extraordinary and enjoy the sound of astronomical photos just like we enjoy the photos themselves. Perhaps even more.