Twenty years ago NASA released an image which blew minds all over the world. Still regarded as one of the most popular space images to have been beamed to Earth, Pillars of Creation has recently been re-captured using Hubble’s latest imaging technology.

Astronomers and astrophotographers are over the moon about another incredible image captured by NASA/European Space Agency’s Hubble Space Telescope. The 1.5 billion pixel image, the largest ever released by Hubble, shows over 100 million stars.

Celebrating its 25th year in orbit, Hubble revisited the Eagle Nebula, aka M16, and created an even more astounding image of the star-forming site. Hard to believe, isn’t it?

The image was created using visible light, as was the original image from 1995, and required a total exposure time of 30.5 hours!

The differences between the two photos can clearly be seen in this side-by-side comparison: 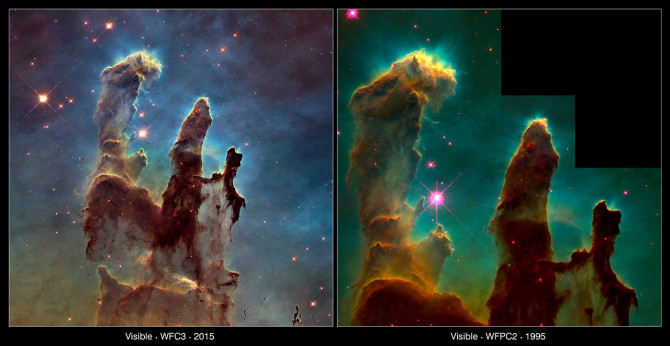 Paul Scowen of Arizona State University, who led the 1995 observations of the Eagle Nebula along with astronomer Jeff Hestler, explains that despite the original photo’s name, there’s actually quite a bit of destruction going on as well:

“Although the original image was dubbed the Pillars of Creation, the new image hints that they are also pillars of destruction. “I’m impressed by how transitory these structures are. They are actively being ablated away before our very eyes. The ghostly bluish haze around the dense edges of the pillars is material getting heated up and evaporating away into space. We have caught these pillars at a very unique and short-lived moment in their evolution.”

Just like a photographer tries getting several variations of a successful scene, the Hubble took another image of the gas-clouds and cosmic-dust pillars. Smart move, considering the nebula is 6,500 light-years away. Instead of trying a different angle or shutter speed, Hubble went for a photo taken in infrared light. Needless to say the resulting image is absolutely fascinating, as you can see below:

Unlike the visible-light photo, the infrared version required “only” 22.4 hours of exposure.

Both photos, obviously composites of many exposures, were taken during September 2014 using Hubble’s Wide Field Camera 3 (WFC3). This camera was installed in 2009 and replaced the Wide Field and Planetary Camera 2 (WFPC2).

For your viewing pleasure, I present you with a visible-light/infrared comparison: 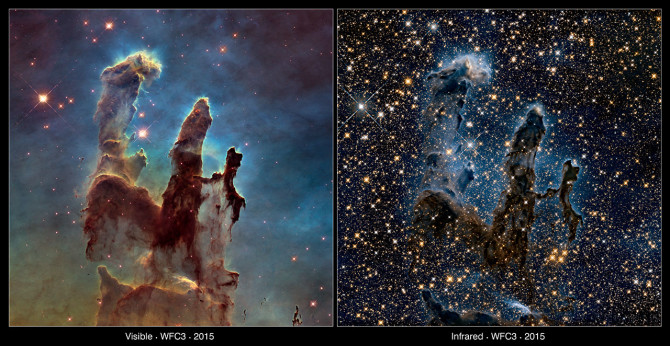 Not resting on their laurels, NASA/ESA released yesterday another remarkable image and this one is a record-breaker. Boasting 1.5 billion(!) pixels, this photo of Andromeda (M31) is the largest ever released by Hubble.

Although the photo covers only a third or so of the galaxy, it shows 100 million stars and NASA says one would need over 600 HDTVs in order to display the entire image.

Comprising of 7,398 exposures taken over 411 individual pointings, according to NASA, the space agency shares further details regarding this panorama:

“The panorama is the product of the Panchromatic Hubble Andromeda Treasury (PHAT) program. Images were obtained from viewing the galaxy in near-ultraviolet, visible, and near-infrared wavelengths, using the Advanced Camera for Surveys and the Wide Field Camera 3 aboard Hubble. This cropped view shows a 48,000-light-year-long stretch of the galaxy in its natural visible-light color, as photographed with Hubble’s Advanced Camera for Surveys in red and blue filters.”

A zoomable version of the photo is available, showing what makes this the sharpest photo ever taken of Andromeda, as well as a fullsize 4.3GB file for download.

I’d say it’s pretty safe to assume most of us will never get the chance to photograph in space, but check out this tutorial if you’d like to learn how to photograph the Milky Way from down here on Earth.

[via Colossal and NASA]