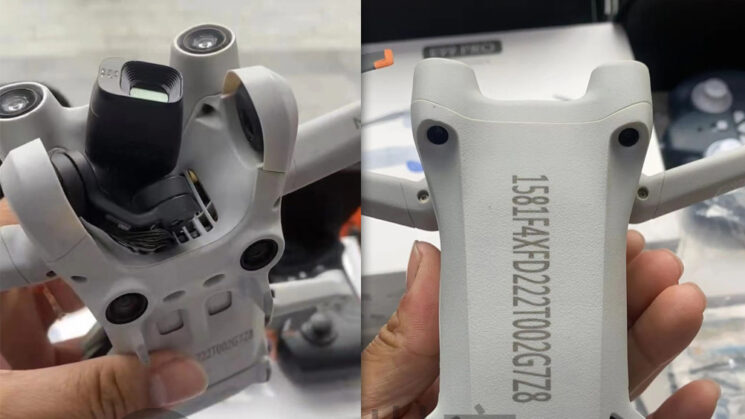 New leaked videos suggest that DJI’s finally stepping up to the plate to bring more advanced features like obstacle avoidance to its <250g product line, the DJI Mini. It’s not much of a surprise considering that Autel recently released their Evo Nano/Nano+ (review here), which are currently the only <250g drones on the market to feature it. The DJI Mini 3 is also expected to come with improved camera performance and video stabilisation and longer flight time.

The videos and photos show what purports to be a “DJI Mini 3 Pro”, which means that we might actually see two different versions of the DJI Mini 3 drone, and were posted to Twitter by DealsDrone. They confirm the weight of the drone, show the obstacle avoidance sensors, the larger battery and improved 3-axis gimbal & camera with a wide f/1.7 aperture.

Despite its pristine appearance, the drone shown in the video looks like it might have crashed at some point (which appears to have been confirmed by DealsDrone) as one side of the drone housing next to the camera appears to be cracked open much wider than it should be. But, this is almost certainly a prototype, so it could simply be a temporary part that doesn’t quite line up. One thing that sticks out about the video above, however, is that the weight of the drone appears to be printed on the battery and not the drone itself like the DJI Mini 2 and original DJI Mavic Mini.

This has led some to suggest that we might see different sizes of battery for the DJI Mini 3 with different capacities and weights that allow those with the appropriate permits for larger drones to fly for longer. But it may be nothing. The battery shown is definitely new, though, showing a 2,453mAh battery vs the Mini 2’s 2,250mAh. This slightly bigger battery might not result in more flight time, though.

On the DJI Mini 2, the weight of the system is printed on the drone itself

That being said, the DJI Mini 2 actually weighs 242g (including battery & SD card). While only a few grams difference, if the Mini 3 maxes out its 249g limit, the motors will have to work just that bit harder. It also has the obstacle avoidance system to power, too. We’ll hear the official word on things when there’s an actual announcement and the real-world word when they start getting into the hands of reviewers (which will no doubt come on the same days as the official announcement if history is anything to go by).

Finally, there’s the camera system. The DJI Mini 2 offers a 24mm full-frame equivalent field of view with an f/2.8 aperture. This is the same field of view and aperture as the Autel Evo Nano. The Autel Evo Nano+, on the other hand, offers a 23mm equivalent with a wide f/1.9 aperture. Given this, it makes sense that DJI would like to go wider if possible. It also gives some more weight to the previous rumours that we might see both Pro (with the f/1.7 aperture) and non-pro (perhaps keeping the f/2.8 aperture) versions of the Mini 3.

Whatever’s coming, an announcement is rumoured to happen at some point this month, so hopefully, we won’t have long to wait in order to find out all the details.