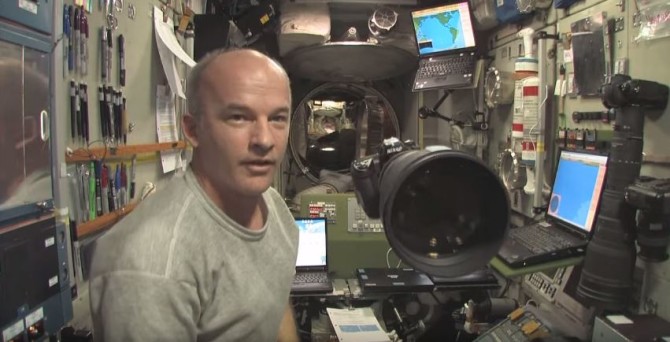 In recent years we’ve become more familiar with the International Space Station (ISS) through live video feeds, experiment demonstrations, and fantastic images that have been brought back to earth.  (Then again, maybe it’s all just thrown together on some Hollywood sound stage…who knows.)  But, to the best of my knowledge, we have never before seen a camera used to demonstrate acceleration in space.

In this video, Commander Jeff Williams used a Nikon camera and 800mm lens to demonstrate the basic physics involved with moving through the cosmos.

Here on earth, if you let go of an object while inside moving vehicle, gravity acts so quickly that the object simply falls basically where it was.  Now, if you toss it out of a sunroof, wind resistance will carry back into the vehicle behind you as you continue moving, but that’s a different story…

However, in space, an object will essentially remain where you left it until force is applied (sometimes minimally) to move it.  So, when he lets go of the camera, it remains relatively motionless while the space station moves around it, providing the illusion that the camera itself is flying.

I’m certain that, had they had a bottle of Scotch or a spare pencil on hand, they would have gladly used it for demonstration purposes.  But, when all you’re stuck with is tens of thousands of dollars-worth of technological crap, you gotta make do with what you’ve got.

Adobe’s GPU Acceleration is Not That Great After All. Yet.