Karen X. Cheng and Jerry Gabra take a look at how we’ve changed in the past 100 years 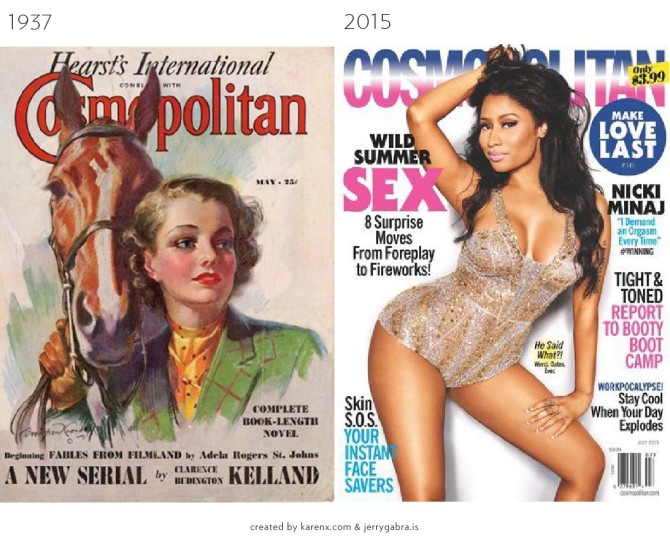 Cosmopolitan covers started out with women dressed conservatively. Then they started showing some skin. Then more skin. Finally, they started posing in sexy positions.

As women have earned more rights throughout the years, they’ve also earned the right to wear whatever they damn well please. Or maybe that just sells more magazines?

What we told teens in 1955: Share your stories, articles and artwork.

What we tell teens today: Get an insane body. It’s hard, but you’ll look hot! 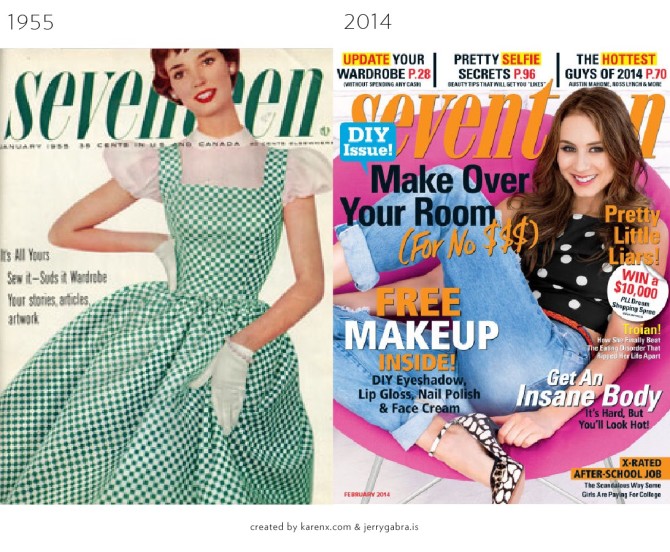 The Seventeen logo has stayed the same, but almost everything else about the design has changed. There was a time when the cover was delightfully simple. Then things just got more and more cluttered.

The magazine cover’s job is to sell the magazine?—?it has to stand out in a rack full of other magazines. So the design starts to get louder and louder.

When doing research for this article, I kept getting headaches whenever I looked at Seventeen covers for too long. Google image search “Seventeen Magazine” and you’ll see what I mean: 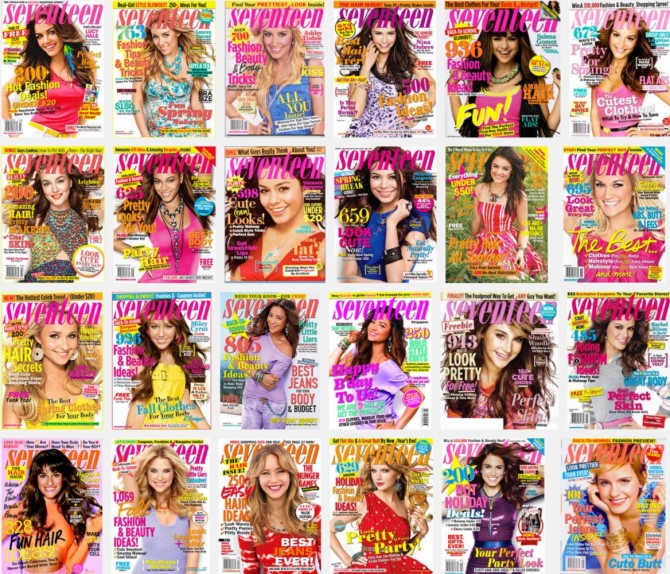 These are our new role models. 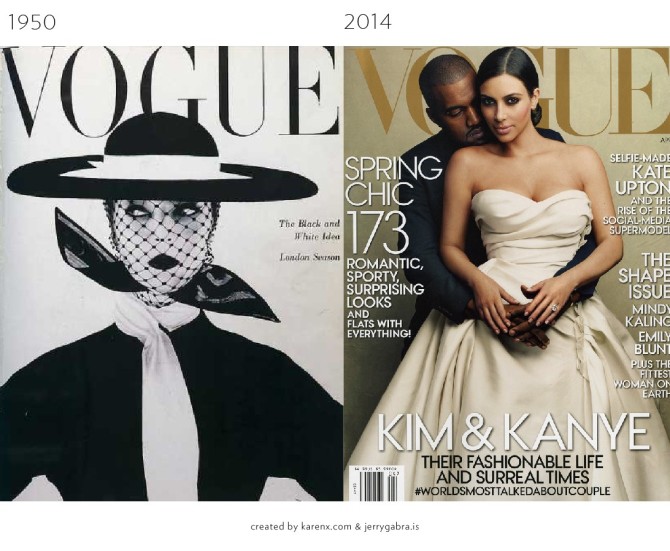 Vogue has had some gorgeous covers throughout the years. Like every other magazine, they’ve added more text on their covers to lure the readers in. But unlike Seventeen, they’ve done a good job of keeping the design classy and uncluttered.

For a more scientific look, check out Robots Reading Vogue, which compiled visual averages for all of the past covers of Vogue. (Thanks to Redditor othfilms for the find).

A walk down history, as seen through Time covers: 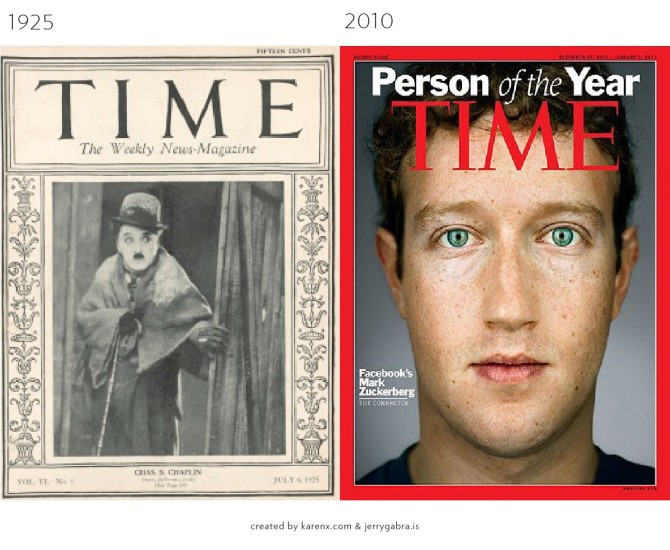 Time has done a great job branding its recognizable red border. The design has remained mostly consistent?—?except for a brief logo change in the 70’s and 80’s, which they quickly realized was a bad idea.

Time continues to feature America’s icons year after year?—?from presidents to pop stars. Who will be our icons in the next 100 years? 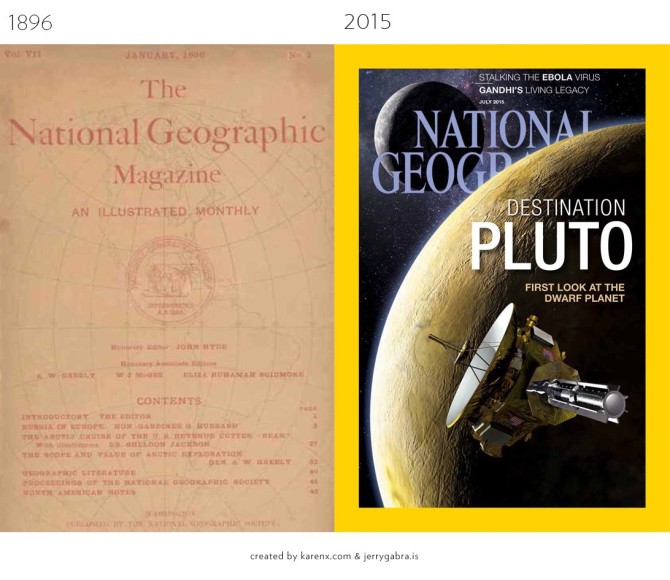 It surprised me that National Geographic’s covers were so text-heavy for most of its existence. This is a magazine that is perhaps best known for its beautiful full-bleed photography?—?yet they didn’t adopt this style until the 1960’s. In contrast, magazines like Vogue and Cosmopolitan were were way ahead of the curve, featuring full-page illustrations as early as the 1900s.

Like Time, National Geographic has done an excellent job of branding its recognizable yellow border.

“Hey, we can sell more magazines with women in bikinis instead!” 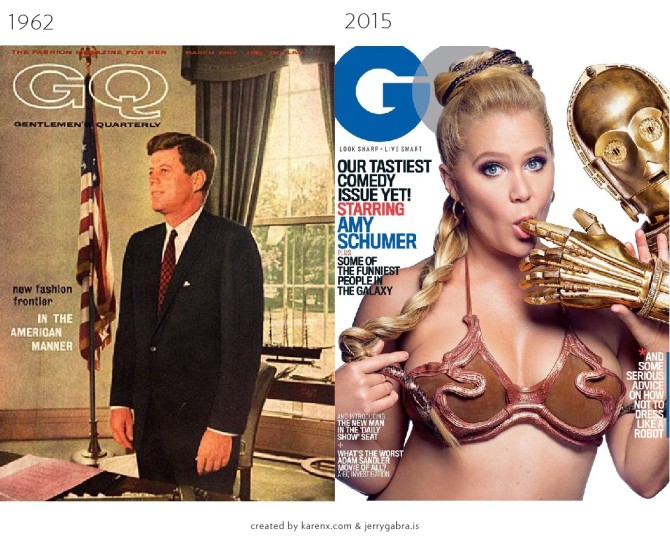 For a long time, every cover of GQ was pretty much the same. A white man in a suit. It’s a wonder it took them until 1990 to figure out that they might be able to sell more magazines by putting women on the cover instead.

GQ actually got in quite a bit of trouble for depicting Amy Schumer sexually with Star Wars characters. They didn’t get permission from Disney (who undoubtedly wouldn’t have granted it), and many Star Wars fans found it offensive. But Amy Schumer loved it, and said she would do it again. 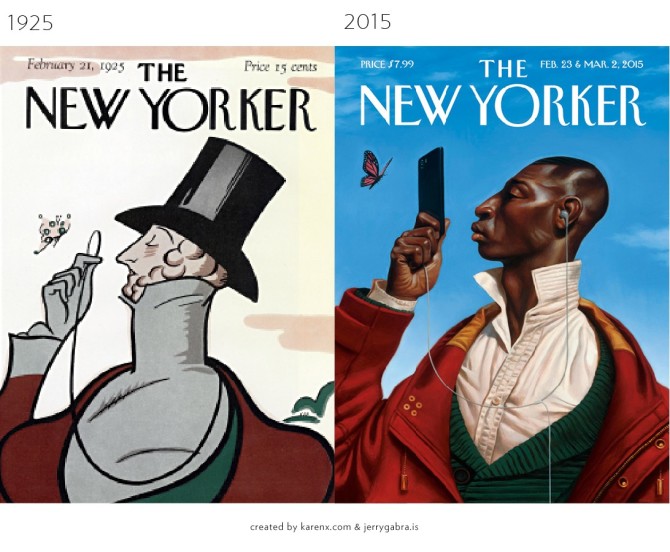 The cover on the right is a special 90th anniversary issue, a clever recreation of the very first New Yorker cover on the left.
Compare the covers from decade to decade:

Pick out any cover at random, and it isn’t immediately obvious what time period it belongs to. With everything else that’s changed around us, The New Yorker has been remarkably consistent.

Their logo has endured 90 years. They continue to charm us with their hand-drawn illustrations. And unlike every other magazine, they haven’t been pressured into adding a bunch of text on the cover.

All magazines experiment with their design and learn what sells. And most other magazines?—?Cosmopolitan, Seventeen, Vogue, Time, GQ?—?have pretty much converged to the same design: a photo of a person, usually an attractive female, prominently featuring her face and body?—?with text headlines designed to get you to want to read what’s inside. This is the formula that sells their magazines.

Survival of the fittest, capitalism edition.

But not TheNew Yorker. It takes discipline to zig when everyone else is zagging.

You do you, New Yorker. 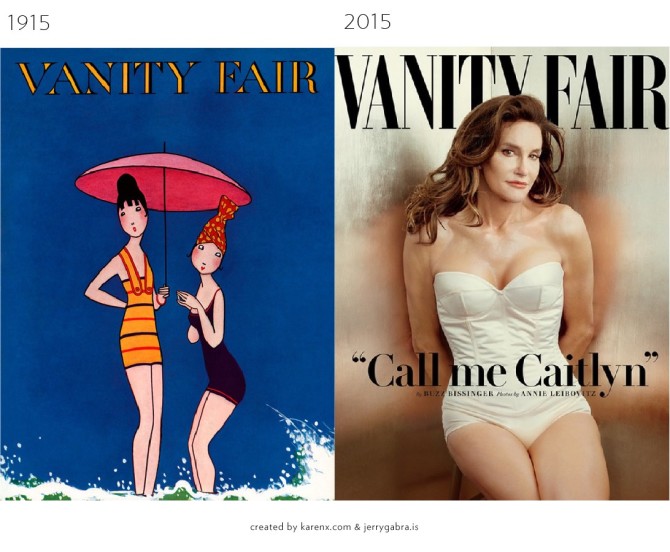 What makes Caitlyn’s cover special is not just the subject matter, but the style as well. Let’s compare Caitlyn Jenner’s cover with every other cover in 2015:

The other covers are littered with mounds of text. Not this issue.

They didn’t need to sell the other stories. This issue was all about her. Vanity Fair nailed it. 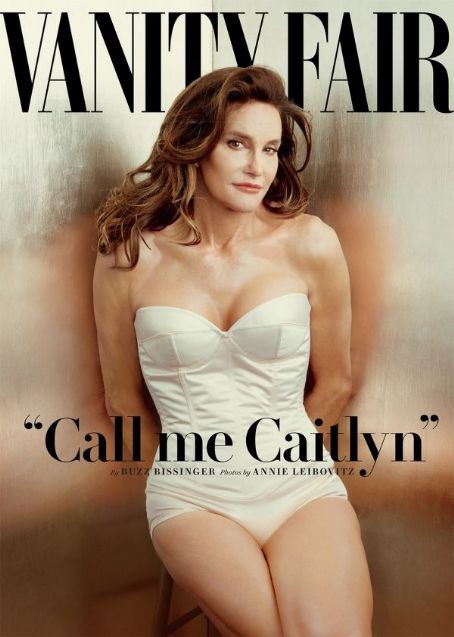 Together, these magazine covers reveal a peek into our history. Sure, we’ve gotten more sexualized. More superficial. We read less. We have shorter attention spans.

But we’ve also gotten more open-minded. At each step along the way, society has pushed the limits of what’s considered acceptable.

Not so long ago, black people couldn’t vote. Though they still face significant discrimination, they are also now idolized on magazine covers. As women have earned more rights over the years, they now take control of their sexuality. And Vanity Fair’s most iconic cover this year is a woman who used to identify as a man.

If you liked this article, please hit ? so others can enjoy it too

Notice any trends we missed? Add your analysis in the comments.

Jerry is product design consultant in San Francisco. Check out his portfolio.

This article was also published here and shared with permission

The evolution of the selfie: how phone cameras have evolved over the years