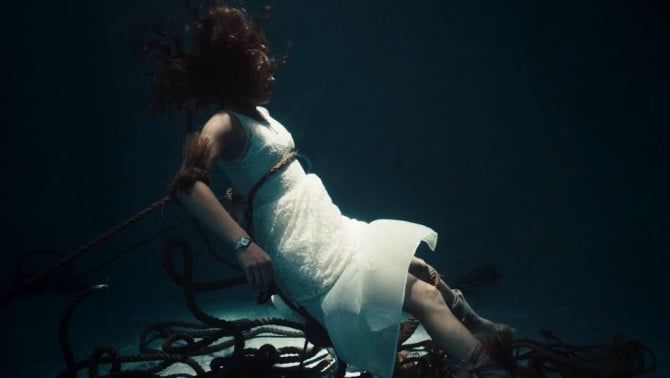 Holding my breathe for even a minute is a difficult task, let alone for four minutes straight.  And I can’t say that I’ve ever been tied up and sunk to the bottom of a pool.  But, for free diver Marina Kazakova, it’s all in a days work.

“Lydia is a song about a failed relationship,” says Johnny Stevens of Highly Suspect, “and how it can be kind of tragic sometimes when two people’s life choices lead them in different directions but their love is still there.”  Apparently, drowning a woman was the best way to communicate that (said in all jest).

The incredible music video, brought to life by Pier Pictures, was shot a single 4-minute underwater take, during which Marina held her breath the entire time.  Now we get a look behind the scenes of how this inspiring film was created.

Wanting to create an “anxious experience for the audience,” the idea was conceived to not only film an actress tied up at the bottom of a pool, but to film the entire music video in a single take.  As the tension builds throughout the scene, the audience becomes more acutely aware that the camera is not cutting to other footage, bringing with it a sense of panic as the onlooker.  By the end, your lungs are about ready to burst on her behalf…

Those looking for tips on how to tell a better story through film can learn much from this beautiful display.  Sometimes minimalism (and perhaps a great set of lungs) can go far in connecting with your audience.